In an astonishing political development, as a CNN/WMUR poll shows Bernie Sanders defeating Hillary Clinton by an astounding 27 points in the New Hampshire primary and an NBC/Wall Street Journal poll finds him defeating Donald Trump in the general election by a whopping 15 points, a long list of prominent Clinton supporters has launched an all-out negative attack against Mr. Sanders reminiscent of the red-baiting attacks Richard Nixon once deployed against liberals.

First, a caution to readers: these polls show definite trends that should bring joy to the hearts of Sanders supporters and dread to the hearts of Team Clinton, but trends in campaigns and results in polls will shift many times in a presidential election.

Second, an observation on the meaning of the Sanders surge: these and other polls demonstrate what I have long argued is the great truth that will be revealed in the 2016 election. There is a progressive populist majority in America that exists beneath the tectonic plates of American politics that Mr. Sanders to his advantage is galvanizing in his campaign and Ms. Clinton to her disadvantage has been resisting in hers.

Third, a word of advice to Team Clinton: calm down and back off the panicked attacks against Mr. Sanders that are highlighted in a New York Times story in which one Democratic Senator who supports Ms. Clinton, Claire McCaskill of Missouri, reached a new low by suggesting that Republicans will run an ad against Mr. Sanders alongside the hammer and sickle which, in other words, would paint him as a communist.

Team Clinton needs to get a grip on their panicked attacks against Mr. Sanders.

Fifth, perhaps the most fascinating impact of the huge Sanders surge is that the mainstream media, which for most of the campaign has instituted a de facto news blackout against Mr. Sanders, is now painting him as David who may slay the Goliath of the Clinton machine and giving him a megaphone to promote his progressive populist message.

Remember that song “What a difference a day makes”?

Sixth, Ms. Clinton is now making the huge mistake of attacking Mr. Sanders from the right with Republican-style attacks against him as being a tax and spend liberal for advocating issues that many or most Democratic voters support such as single payer health care. This is what Ms. Clinton did in the last Democratic debate.

Seventh, what appears to be a scorched earth attack by Ms. Clinton and her team against Mr. Sanders for being too liberal is the worst possible move for a candidate with high negative ratings and low trust ratings who will need every Sanders voter to turn out on election day in November if she is ultimately the Democratic nominee.

The bonehead move of the year award goes to DNC Chair Debbie Wasserman Schultz and whoever whispered in her ear to seek the fewest possible debates with the lowest possible audience.

Eighth, I predict any scorched earth attack by Ms. Clinton and her team against Mr. Sanders will lead to a humongous surge in small donations to the Sanders campaign. Expect news stories over the next week to document that the more Ms. Clinton attacks Mr. Sanders the more his small donor base will rally behind him, and the more her allies attack Mr. Sanders for being a socialist—or even a communist as Senator McCaskill’s innuendo implied—the more the large and growing small donor movement behind Mr. Sanders will expand and donate even more money to his campaign.

Ninth, Team Clinton appears to be going berserk in their panicked attacks against Mr. Sanders. They need to calm down and get a grip. Ms. Clinton has offered long and detailed proposals that are generally progressive and highly worthy. They do not go as far as the Sanders proposals, but they move in the same direction, and she would be well-advised to stop attacking Mr. Sanders and start vigorously advocating her own proposals.

Tenth, the bonehead move of the year award goes to Democratic National Committee chair Debbie Wasserman Schultz and whoever in the Clinton campaign whispered in her ear to seek the fewest possible debates with the lowest possible audience.

This ill-fated plan to rig the nominating process violates everything Democrats stand for and has now backfired against Ms. Clinton. Who ever heard of a political party that wants the smallest audience to hear its message, or a national political committee such as the DNC showing such extreme bias for any candidate as it did for Ms. Clinton and against Mr. Sanders on the debate issue?

Eleventh, Mr. Trump can continue to boast of his poll ratings, but it is media malpractice for any journalist to not directly challenge him about why Mr. Sanders is kicking is butt in general election match-ups in a number of recent polls, and why Ms. Clinton has begun to kick his butt as well in those polls, though (and this is important) by a smaller margin than Mr. Sanders.

Ladies and gentlemen, we now have a real campaign where the voice of the people will now be heard. Let the real debate begin and let the voters decide.

The progressive populist message is now front and center on the great stage of national politics, and this is good news for Democrats and great news for America. 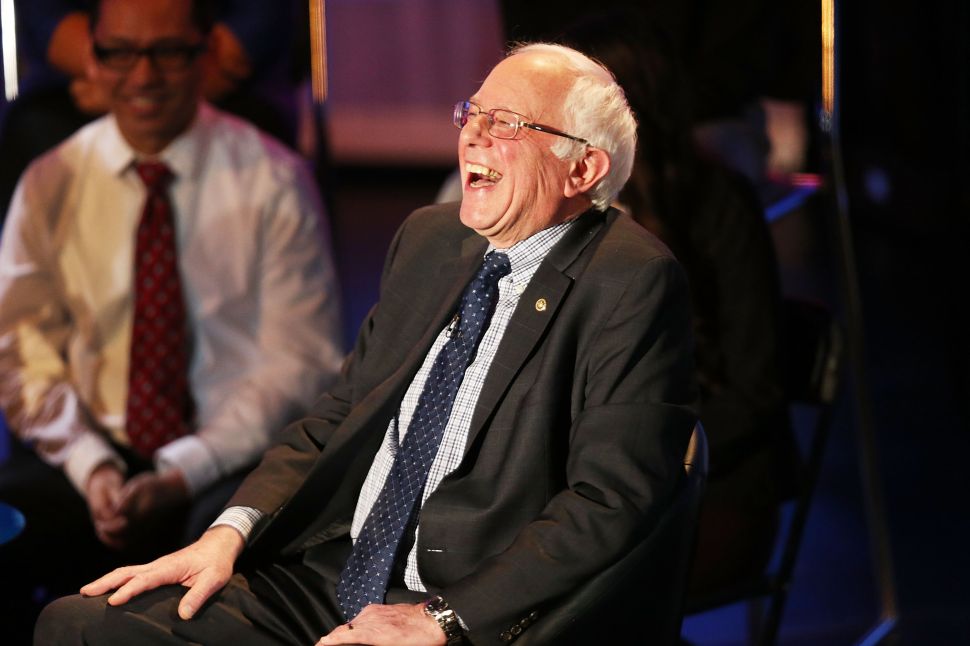