[youtube https://www.youtube.com/watch?v=sZcJkRdIvFE&w=560&h=315]
Last night’s Lip Sync Battle Season 2 premiere on Spike TV started strong with a throw-down between star spouses Jenna Dewan Tatum and Channing Tatum. While Mrs. Tatum brought a fresh rendition of her husband’s scene in Magic Mike to Ginuwine’s “Pony” that involved her giving her husband an on-stage lap-dance, it was easily surpassed when Mr. Tatum performed Beyonce’s “Run the World (Girls)” joined by Queen Bey herself.

The Hateful Eight star appeared on stage perched atop a giant horse statue dressed in a bra, feathered vest, and skirt with blond tresses flowing gracefully in the wind. After dismounting, he proceeded into his shoulder-popping, hip-shaking, hair-whipping performance of Beyonce’s female anthem. Just as his performance hits its peak, the doors open behind him and Beyonce enters with four men in tow. Her appearance on stage was met with a look of shock by Mrs. Tatum as the duo finished their performance with a flurry of blond, wind-blown locks.

Though it was this final performance that stole the show, the “Tatum Takedown” was a spectacle through and through. With Mrs. Tatum starting off the show with a sexy performance of Paula Abdul’s “Cold-Hearted Snake” with Abdul herself joining her on stage. This was followed by Mr. Tatum’s hilarious performance of Disney’s Frozen theme song “Let It Go” complete with snowflake ensemble and full Elsa attire.

Though Mrs. Tatum’s cameo and cheeky homage to her husband’s steamy role certainly put up a fight, it stood little chance against the epic performance of the two Beyonces. 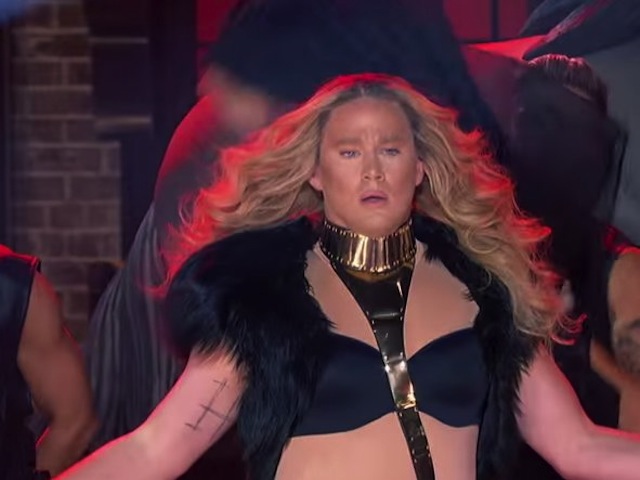