Mayor Bill de Blasio today flatly refused to say if or how his administration would try to advance its ambitious plans to build affordable housing if the 421a tax credit for developers expires—even though just four days remain for the real estate industry and organized labor to reach a deal on prevailing wages to be written into the exemption, which insiders say is crucial to all new construction.

With time quickly slipping away for the Building and Construction Trades Council and the Real Estate Board of New York to reach an arrangement, Mr. de Blasio brushed off questions about the abatement possibly disappearing as “hypotheticals.” He refused to even entertain the notion that the bargaining could fail.

“Four days is a long time in this work,” Mr. de Blasio told the Observer an event in Brooklyn.”This is not the first time 421a has been on the brink. I think there’s a lot of reasons why it can be saved here.”

The purpose of the press conference was to announce the administration had financed the building or preservation of 40,000 below-market housing units since the mayor entered office in January 2014, putting it ahead of the schedule outlined in the mayor’s plan to construct or save 200,000 units in 10 years. But the administration admitted today that many of the projects started last year because developers rushed at record rates to get construction underway so they could file applications for 421a approval before the exemption potentially vanished.

“We did certainly see a rise in building permits resulting undoubtedly from the desire to get in the ground before 421a,” said Vicki Been, commissioner of the Department of Housing and Urban Development, hinting the city might have other tools to prod construction in the future without elaborating. “We’re always going to be rolling out new programs, and they will come throughout the years as the needs arise.”

During former State Senate Majority Leader Dean Skelos’s corruption trial last year, an executive from Glenwood Management—one of the city’s biggest luxury developers—testified that the loss of 421a would bring construction in the city to a halt. The possibility so terrified real estate industry leaders that they agreed to bankroll the re-election of Mr. Skelos’s Republican conference, and even bowed to his illegal requests that they set his son up with payments and no-show jobs.

The now-controversial tax credit was originally conceived to spur construction during the city’s economic nadir during the 1970s, with new requirements that developers receiving the break include some below-market apartments getting added years later. Amid a fierce push from construction unions last spring, Gov. Andrew Cuomo and the State Legislature agreed that 421a would expire on January 15 of this year if the Building Trades Council and REBNY failed to agree on wage floors.

The abatement previously contained no pay standards, and Mr. de Blasio’s administration warned last year that enacting them could mean as many as 17,000 affordable units never getting built. Today, the mayor asked those in the negotiations to consider the people impacted if the bargaining bears no fruit.

“Pay very close attention to the fact that so many people in this city want to see this succeed, so we can get on with the work of creating affordable housing,” he said. 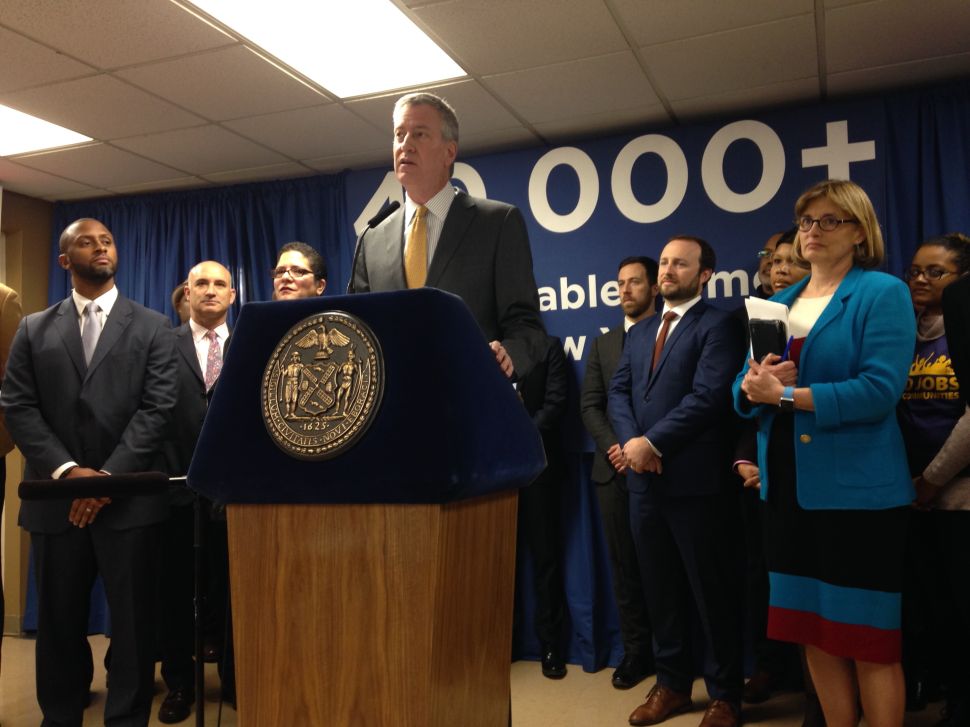