As a rule, it is better to be pissed off than pissed on. Chuck Rhoades, however, doesn’t play by the rules. Pissed off? Plenty. Played Paul Giamattically by Paul Giamatti, the crusading attorney general at the heart of Showtime’s new show Billions spends the bulk of the high-finance drama’s pilot fuming about one damn thing or another. But during the opening scene, in which a a faceless woman extinguishes a cigarette on his bare chest and then urinates on the burn, he’s happy as a clam. There’s a time and a place for it, sure, but ol’ Chuck rejects your pissed on/pissed off binary. He’s bodyfulid-fluid. Cable drama, motherfuckers! It’s where anything can happen…and usually does!

In a show about the kind of financial megacrimes that often stay concealed simply by virtue of their own impenetrable complexity, the biggest mystery of all is who the fuck thought it was a good idea to start off this show in this way. If you sat down and tried to come up with a parody of pay-cable edginess—certainly the writers of The Brink gave it the old college try—you couldn’t come up with a more ludicrously stereotypical act of gratuitous naughty-naughty. Not only is it absurd in its context-free, dumped-in-your-lap try-hardness, it’s also superfluous to the story that follows. Despite appearances, Giamatti’s Rhoades is no antihero. He’s not taking bribes. He’s not orchestrating crimes. He’s not stabbing his coworkers in the back. Shit, he’s not even patronizing prostitutes: The final scene, which even someone with piss in their eye could see coming at least 45 minutes away, reveals in a sort of inverse of the Mad Men pilot’s plot twist that it’s Chuck’s own very successful, very together, very loving wife doing the burning and peeing. Yeah, Rhoades is gruff, and he plays hardball, but as best we can tell from this first episode he’s on the up and up. He really does resent the impunity of the big money boys, and he really does see his job putting them behind bars as a public service. If you want him to be into BDSM, fine—it’d be awfully nice to see a show treat it as part of a healthy, mutually respectful relationship rather than as a sign of dysfunction or sociopathy, and hey, after the day he had he’s earned it. But if that’s what you’re after, why portray it in this oh-no-they-didn’t, mature-readers-comic-book fashion? Is there some big Nielsen demo of people interested in watching a Paul Giamatti Wall Street drama, but only if it opens on him bound and gagged and indulging in watersports that I’m not aware of?

The best guess I’ve got is that someone—maybe writer-creators Brian Koppelman, David Levien, and Andrew Ross Sorkin, maybe the famously meddlesome network that saved series co-star Damian Lewis from oblivion repeatedly on Homeland—felt the premiere needed more fireworks. They might even be right. With Rhoades established as a straight shooter when not beneath the beam of a golden shower, and Lewis’s antagonist hedge-fund king Bobby Axelrod a villain who’s more too good at his own game than outright malicious, the hour ticks by watchably, but not necessarily rivetingly. Aside from the rough sex, the only other spectacle on offer is the offensively enormous beachfront house Axelrod buys, in cash, as a come-at-me-bro declaration of his intent to defy any investigation from Rhoades’s office. Looking at this monstrosity from the outside, watching Axelrod and his perfect wife (Malin Akerman, who can be trusted to make the character more than arm candy) and his perfect kids romp around a “house” that almost certainly has a multiple bathrooms bigger than my entire apartment—now that’s obscene, urine be damned. But on a scale of one to Wolf of Wall Street, it’s not exactly shocking in its excess. It’s just pointlessly excessive, as excess tends to be.

But a guy with an established track record and a ton of money can buy a lot of things. Billions sure did, assembling its cast from a veritable buffet table of New Golden Age of TV actors. Off the top of my head, there’s Giamatti (John Adams, Downton Abbey, Sorkin’s own Too Big to Fail), Lewis (Homeland, Wolf Hall), Akerman (The Comeback), Maggie Siff (Mad Men, Sons of Anarchy), David Costabile (The Wire, Breaking Bad), Toby Leonard Moore (Daredevil), Jeffrey DeMunn (The Walking Dead), Glenn Fleshler (Boardwalk Empire, True Detective, Hannibal), Terry Kinney (Oz, Fargo, Show Me a Hero), Kelly AuCoin (The Americans, House of Cards), Deborah Rush (Strangers With Candy, Orange Is the New Black), Robert LuPone (The Sopranos, The Affair), Stephen Kunken (The Affair), Condola Rashad (Smash), Danny Mastrogiorgrio (Show Me a Hero), and, uh, Jerry O’Connell—it’s like Showtime played prestige-drama Yahtzee, shaking up a set of recognizable and reliable performers and hoping for a winning throw.

And if no one’s shouting the y-word just yet, nor should you necessarily pack up the game and switch to Pictionary instead. The decision to make Rhoades a straight arrow is, well, the last thing I’d expect from a show that began in such a bog-standard TV-MA way. It’s going to be interesting, too, to see Lewis cut loose in a modern day setting, compared to his memorable but understandably twitchy and constrained turn as double-agent Brody in Homeland. Siff is magnetic, and as Rhoades’s spouse and Axelrod’s trusted company shrink she could well become the lynchpin of the whole thing. As noted, talented actors are scattered throughout the show, like gooey chocolate chips waiting for someone to bite into just the right part of the banana bread. The stock manipulations and machinations, as well as the political and PR mind games, are just tricky enough to flatter the audience’s intelligence, and they never seem far removed from an underlying understanding that the level of wealth and influence these people have is an absolute catastrophe. It could get crasser and dumber and sleazier, it could get sharper and smarter and more self-confident. For now? If it’s yellow, let it mellow. 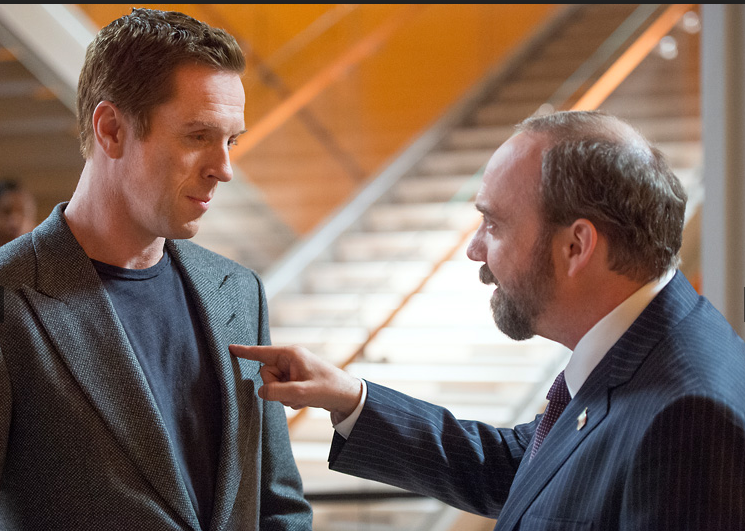