The African American community is lashing out at Ta-Nehisi Coates’ scathing criticism of Bernie Sanders in a recent article for The Atlantic. In what seemed to be a means to strengthen the polarity between Dr. Cornel West, a Sanders supporter who made headlines last year for criticizing Mr. Coates, the article’s bias was clear. Mr. Coates attacked Mr. Sanders for something no presidential candidate—including Hillary Clinton or even President Barack Obama—has supported.

During Fusion’s Iowa Black & Brown Forum, Mr. Sanders was asked if  he favored reparations. “No, I don’t think so. First of all, its likelihood of getting through Congress is nil,” he responded. “Second of all, I think it would be very divisive. The real issue is when we look at the poverty rate among the African-American community, when we look at the high unemployment rate within the African-American community, we have a lot of work to do. So I think what we should be talking about is making massive investments in rebuilding our cities, in creating millions of decent paying jobs, in making public colleges and universities tuition-free, basically targeting our federal resources to the areas where it is needed the most and where it is needed the most is in impoverished communities, often African-American and Latino.”

Mr. Sanders’ response wasn’t a firm “no” to reparations—he believes investments should be allocated to African-American communities to redistribute wealth and resources, helping mitigate the inequalities incited by slavery and the subsequent decades of prejudicial government and social policies. Mr. Sanders’ response may have insufficiently addressed race issues today, but that isn’t an excuse for Mr. Coates to alienate Mr. Sanders in order to unleash his own rhetoric on reparations.

If Mr. Coates is serious about his beliefs on reparations, instead of undermining the article with favoritism for Ms. Clinton (as all of his arguments do), he would have held her to the same expectations.

Ms. Clinton is mentioned only once in Mr. Coates’ article. “The calls for community policing, body cameras, and a voting-rights bill with pre-clearance restored—all are things that Hillary Clinton agrees with,” he writes. “And those positions with which she might not agree address black people not so much as a class specifically injured by white supremacy, but rather, as a group which magically suffers from disproportionate poverty.”

Mr. Coates’ bias is evident. To suggest Mr. Sanders sees African-Americans as “magically suffering from disproportionate poverty” is erroneous. At the same forum, Ms. Clinton fumbled a question on white privilege. And, once she finally addressed the issue, she made clear a distinction based on economic disparity between herself and Latino migrant workers. If Mr. Coates is serious about his beliefs on reparations and the misunderstanding Mr. Sanders allegedly has on white supremacy, instead of undermining the article with favoritism for Ms. Clinton (as all of his arguments do), he would have held her to the same expectations.

“To me, it became automatically disingenuous, and became a hit piece—a powder puff piece to support Hillary Clinton—because you are trying to make Bernie Sanders go through hoops you would not dare ask of Hillary Clinton,” said Benjamin Dixon, host of the Benjamin Dixon Show on YouTube. “Who has asked Hillary Clinton about reparations and wrote an intellectual thought piece from the pen of someone with such political influence in the black community? Nobody.”

It is hypocritical for Mr. Coates and the black community to push expectations on Mr. Sanders while none are imposed on Ms. Clinton, Mr. Dixon notes, citing that when ‘Black Lives Matter’ activists began disrupting Mr. Sanders’ campaign events, he took their criticism into consideration, bringing on National Press Secretary Symone Sanders and releasing a comprehensive campaign platform on racial justice. Ms. Clinton has yet to issue one on hers, and had Black Lives Matter activists removed from a campaign event.

Rapper Killer Mike took to Twitter in defense of Mr. Sanders, making similar arguments that he is being targeted while Ms. Clinton receives unwarranted immunity.

The fact that blacks have to even justify the case for reparations is shameful. The fact that only 1 candidate is being called to task is

Bullshit. Especially when that candidate is the only one with policy proposal that directly effects the black community if elected.

Mr. Coates denigrates Mr. Sanders as a socialist, a term that has been used pejoratively against the Democratic presidential candidate since he announced his campaign. Mr. Sanders is a Democratic Socialist. Socialism is defined by the Merriam-Webster dictionary as “a way of organizing a society in which major industries are owned and controlled by the government rather than by individual people and companies.” Bernie Sanders doesn’t advocate for the confiscation of private corporations by the government.

In a speech to Georgetown University in November 2015, Mr. Sanders provided his own explanation of Democratic Socialism. “So let me define for you, simply and straightforwardly, what democratic socialism means to me. It builds on what Franklin Delano Roosevelt said when he fought for guaranteed economic rights for all Americans. And it builds on what Martin Luther King, Jr. said in 1968 when he stated that ‘This country has socialism for the rich, and rugged individualism for the poor.’ It builds on the success of many other countries around the world that have done a far better job than we have in protecting the needs of their working families, the elderly, the children, the sick and the poor.”

Mr. Coates concludes by noting that he tried to contact Mr. Sanders, but received no response. I don’t blame him. 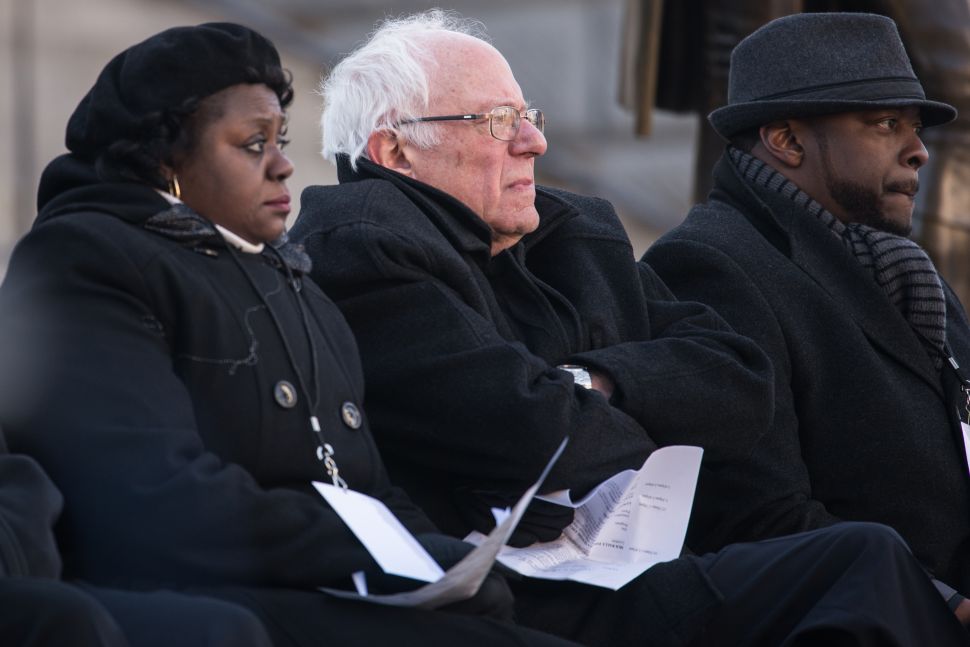