It snowed a bit Saturday, the same day the militias hit the eastern, rural part of my state. In normal times though? Winter weather in Portland plays like a sedative. The mood mariner in me has developed a full-on jones for walking the city, and that’s cool ’cuz within Multnomah County rain rarely falls heavy enough to wash away the truth.

And the truth is that where I live is racially awkward. A sensitive person of Negro extraction here—in 99 percent of Oregon, actually—can tap into a pioneer spirit while traversing this remote land. One can feel like the first to have stepped foot on a given sidewalk.

In pockets, the Portland populace can grow Idaho White, and I don’t even necessarily mean that in a bad way. Nah. Automobiles glide slowly through the cleanest, most quiet streets since the last Mayberry spin-off got cancelled. Honky horn honking is minimal, a particular silence that grows on a person the exact same way that anyone who has lived in a city might imagine, in their wild dream. Even on days that are gunmetal grey, the trees are abundant as fuck. Portland flora to be quality of life game changer.

Most comforting of all, in the middle class hood where my (not Black) girlfriend and I live, the neighbors aren’t much tripping. Anymore. And, at present, only two service workers that I can count openly hate me. Nothing changes, like the rain.

Around the first of this month though? When I wandered a dozen blocks outside my usual pedestrian radius? The most disconcerting shit jumped off. I began to approach an intersection, got roughly 20 yards from it. A shrunken, gray-haired woman in anonymous sedan drove past me and then curiously slowed at the crosswalk. In response I slowed my stroll. I’d maybe cross the street after the small lady moved ahead.

Or perhaps keep straight ahead.

Upon lifting my gaze I saw that the woman was waiting for me. Like, gratuitously. This pale little woman was giving me 20 seconds of her life that I’d not asked for. Taken aback, I crossed in front of her anonymous sedan. The smile that played across the driver’s face was sublime and strange and–could it be prideful?

Was I in the midst of some bucket-list type shit? Or was the excess love in my mind?

Not three blocks deeper into Southeast Portland, an almost identical situation played out. This time the driver was a younger dude—also Caucasian, if that need be stated—who too beat me to the intersection, easily. Then he hung out. And I was like, yo, local folk are polite! And their pedestrian code is top notch, at least for the West Coast.

This is something else though.

This sidewalk terrain isn’t, uh, new ground. In the recent past I’ve remarked on the local racial awkwardness that’s inevitably associated with an up north place that didn’t let Blacks come without strings—or chains—attached until roughly World War 2. The terrain is not quite liberal guilt. More like liberal guilt’s kissin’ cousin. An anguish over militia members in the family tree that’s hard to articulate. Because a state legacy that includes de facto slavery would be a lot for any American people to process, especially one granted the geographic privilege of doing its own thing. The Portland I know must be reminded to ask what its past racial isolation has allowed to flourish. Or prevented from flourishing.

The perks their fathers never told them about. It’s a lot to process.

A week prior to the crosswalk incident, I’d ridden to the most remote and forested county in the part of Oregon that touches the top of California. My gig was to get to a rural public library and facilitate a discussion of hip hop in the Pacific Northwest. So Caucasian this gig was.

Yet, aside from one angry woman who reacted to my confirmation that Oregon actually has hip hop as though I’d informed her that The Beaver State had contracted herpes, these Whitest of the White drank in the Negro knowledge and shared their own ideas with a disarming enthusiasm. The culture around rap music had been nearly abstract in this particular quadrant of The Hinterlands. Even Macklemore seemed the stuff of interstellar communication. And they soaked up everything I said, taking notes sometimes. A part of American life they had been cheated on, perhaps?

These are not local stories, not in that rural library or among the driveways and hedges of those moist streets near my crib. The edge of “Portlandia” ranges wide, brushing up against SodaSoPas from Oklahoma City to Williamsburg. And while probably not as demonstrably as in Oregon, the nation is undeniably seeing an uptick in Caucasian millennials slowing at intersections and seeking out a Negroes to say whattup to.

(For some old White men it’s still that ernest, Fonzi-informed thumb’s up. Whatever though. Do your thing, White man.)

One hundred percent, extreme pedestrian courtesy is reductive. If that’s what it takes though to make y’all start dealing with the past in a way that’s holistic? I’ll take one for the team and be that penance figure on the corner. Wait for me. 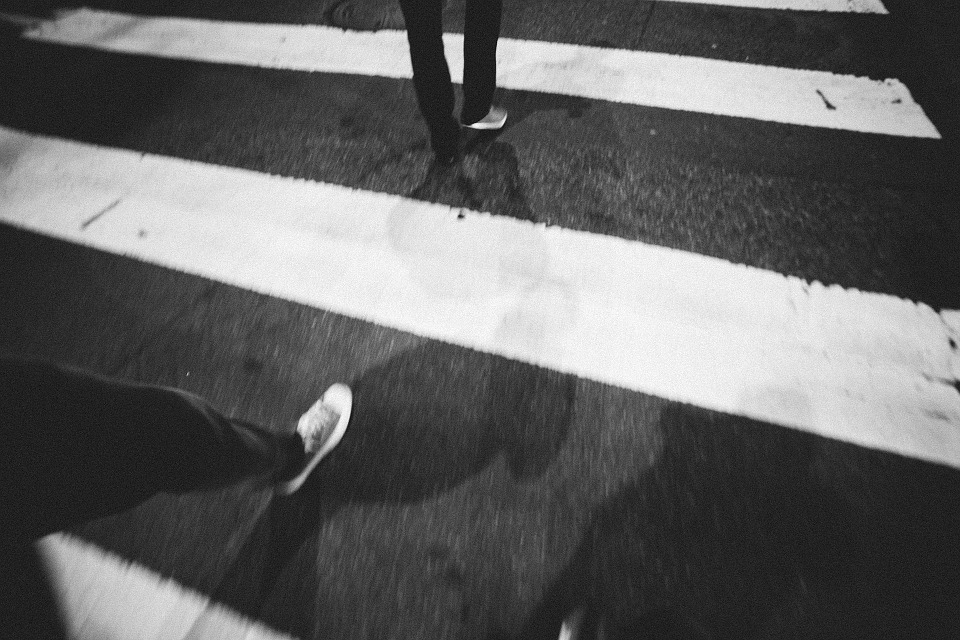