If your office or home houses a Keurig, you can now add bone broth to your repertoire. Bone broth has been set to replace kale for quite some time now, but this mainstream option might signal its official takeover. Its trendiness led to a hot chocolate version at Brodo Broth Company in the East Village and even a vegan option, courtesy of lunch spot Dig Inn and their vegetable scraps. Dig Inn’s no-bone broth was controversial, as bone broth devotees believe vegans are missing the nutrients accrued from the meaty original version. While some nutritionists and fitness gurus claim it as a cure-all, researchers believe it’s a fancy name for what’s really just stock.

Eater recently reported on bone broth in K-cups in both beef and chicken varieties, which sounds more ideal for canine consumption than human consumption. San Diego’s LonoLife launched the concept, which is geared towards the Paleo community. It promises to give bone broth drinkers the same “nutrients, minerals, gelatin, collagen and amino acids.” Although, Paleos among us are sure to eschew this cup-sized version, as its made with powder instead of the roasted animal bones they’ve grown accustomed to.

The company currently offers two bone broth flavors, beef and chicken, plus three actual soup offerings, including chicken, mushroom and vegetable. LonoLife was inspired by the Campbell Soup Co. when they launched their own K-cups in September. LonoLife’s cups are $2 each, and regular old Campbell Soup cups are $1.50. While the price difference is small, one can never go wrong with Campbell’s tomato soup and a grilled cheese; especially if you upgrade the sandwich with a dash of truffle oil.

Before you procure your own personal K-cup or order them for the entire office, maybe consider actually cooking a family favorite. Regardless of whether yours is Matzoh ball soup or ramen, there is something nourishing and hearty about a homemade soup, although the truly amateur chefs can always Seamless soup. Unfortunately, bone broth, and homemade soups, don’t hold all of the answers to your health problems, whether or not they come in K-cups. 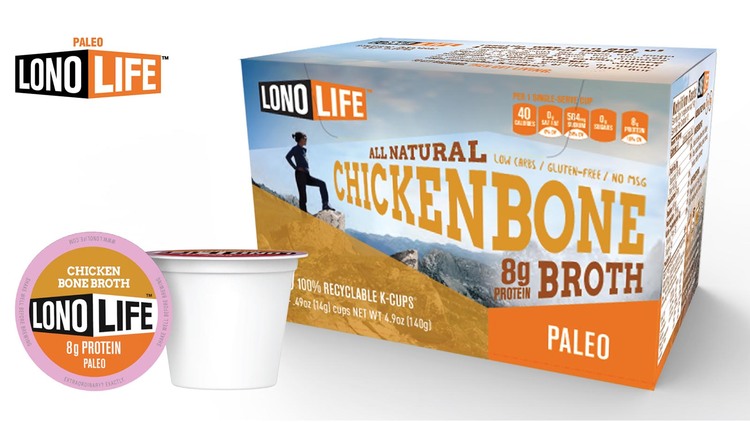