Early this morning in Moscow, a 30-foot flag featuring Barack Obama was raised to the top floor of a building across from the U.S. Embassy. In blood red letters, the word “KILLER” is stamped beneath the face of the president.

The evening before, a laser display projected “Obama Killer #1” onto the U.S. Embassy itself.

The party responsible for such anti-American productions is the Moscow-based “Glavplakat” art society, who issued a statement saying the banner was in response to the “U.S. Government’s plans to invade the territory of yet another sovereign state.”

“The word ‘killer’ defines the 44th U.S. President, and is given to him because of his decision to send the infamous 101st Airborne Division into the Syrian conflict,” states Glavplakat. “Let’s keep in mind that this division carried out practically every U.S. military invasion in the last decade.”

The move to send the 101st Airborne Division to Syria and Iraq was announced by U.S. Secretary of Defense, Ashton Carter, on January 25.

“The primary objective of the mission, estimated to involve about 1,800 US troops, will be to force ISIS out of their two power centers in Mosul in Iraq and Raqqa in Syria,” Mr. Carter explained. “We need to destroy them [the terrorists] and I’d like to get on with that as soon as possible.”

Also known as “The Screaming Eagles,” the 101st Airborne Division is armed with 300 helicopters, including three battalions of ‘Apache Attack’ Boeing AH-64s. The decision to employ The Screaming Eagles only adds fuel to the fire that burns between Moscow and Washington—leading Russia’s Foreign Minister to announce at a press conference yesterday that, “there will be no business as usual between Russia and the West.” 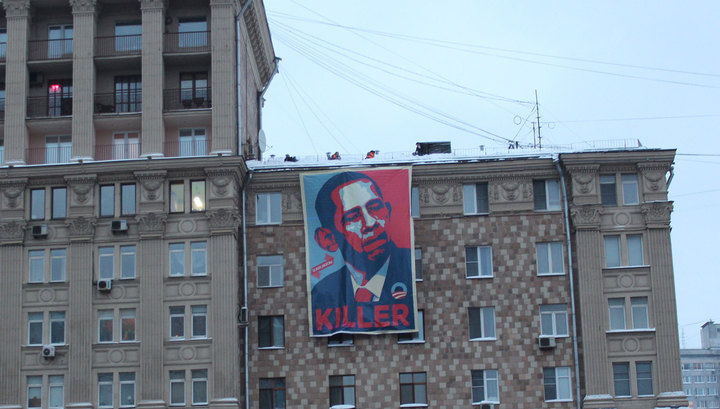