I hereby declare that the news blackout of the mainstream media against Bernie Sanders has ended.

Regarding the breaking news about the latest maneuverings surrounding the high profile interview given by Vice President Joe Biden to CNN in which he offered high praise to Mr. Sanders and implicit criticism of Hillary Clinton, it is destined and was designed to boost the Sanders campaign in the Iowa caucus and the New Hampshire primary.

Big picture—the VEEP told CNN that Mr. Sanders has struck a powerful chord with American voters with his call for economic equality and justice in an economy in which the game is fixed, the bid is rigged, the rich get richer and everyone else gets left behind.

Mr. Biden (faintly) praised Ms. Clinton by stating she has taken some good positions on economic equality issues, but added (here is the dagger) she is a newcomer to the cause.

Big picture—and brilliantly—Mr. Biden said that there is a major tide in public opinion favoring candidates who will champion policies to redress economic inequality and unfairness and that Mr. Sanders has been championing this cause with integrity, passion and authenticity throughout his career in politics, which accounts for his growing support.

And big picture—in my humble opinion with the kind of brilliance that would make Niccolo Machiavelli proud—Mr. Biden (faintly) praised Ms. Clinton by stating that she has taken some good positions on economic equality issues but added (here is the dagger) she is a newcomer to the cause (unlike Mr. Sanders and presumably Mr. Biden).

Let me preface what follows by mentioning that I am a certified political insider who spent years working at the leadership level for Democrats in Congress, and am now a columnist who will be proven right, and sometimes wrong, my fair share of times. But I always try in good faith to take my readers inside the corridors of power and tell them what is actually happening without the b.s. that corrupts so much spin by politicians and so much spin that is falsely labelled as news by many other insiders in the mainstream media.

Here is a no-b.s. analysis of the meaning and impact of Mr. Biden’s high praise of Mr. Sanders and implicit criticism of Ms. Clinton on CNN at the hyper-critical moment of the imminent voting in Iowa, New Hampshire and the other states that will follow in rapid succession.

Mr. Biden’s implied criticism of Ms. Clinton, when he suggested that she is a newcomer to the cause, will undoubtedly serve to reinforce doubts about her authenticity whether that is what he intended or not.

First, without any question, Mr. Biden’s extravagant praise of Mr. Sanders—which he repeated again during a Tuesday interview with the Today Show on NBC—will boost the Sanders campaign in Iowa and New Hampshire. Mr. Biden’s high praise of Mr. Sanders for taking progressive positions on economic equality, his high praise for Mr. Sanders taking these positions with sincerity for many decades, was so effusive the Sanders campaign could well run the tape of these interviews as campaign ads in Iowa and New Hampshire.

Second, Mr. Biden’s implied criticism of Ms. Clinton, when he suggested that she is a newcomer to the cause, will undoubtedly serve to reinforce doubts about her authenticity whether that is what he intended (which I believe it was) or not.

During Mr. Biden’s interview on the Today Show, he repeated his high praise for Mr. Sanders exactly as he offered it on CNN. But when he was asked about whether his CNN comments about Ms. Clinton were intended as criticism, he (lamely) noted that she had been Secretary of State for four years and not involved in economic equality issues. Mr. Biden could have said—but did not say—that Ms. Clinton’s commitment to the cause of economic equality was a strongly held belief that she championed throughout her career.

Third, with all due respect to Mr. Biden, I believe what he is doing is positioning himself—for the second time in this presidential campaign—to run for president in 2016 if Ms. Clinton’s campaign falters and that his comments about Mr. Sanders and Ms. Clinton were designed to help Mr. Sanders win the Iowa caucus and the New Hampshire primary.

I have great respect and personal affection for Vice President Biden but, just like all politicians who have been in the business as long as he has, and risen as high as he has, Mr. Biden is no stranger to the clever arts of political ambition. It is no coincidence Mr. Biden suddenly shows up on CNN and the Today Show. Nor is it a coincidence that a man who has campaigned for and served in elective office nonstop since the 1970s would choose his words in carefully planned national television interviews in ways that could only help Mr. Sanders in the Iowa caucus and New Hampshire primary.

Lets recall a recent time when Mr. Biden was considering running for president and canvassing wealthy campaign donors to determine whether they could donate big money to a potential Biden campaign. At that time, Mr. Biden, sounding much different than he did on CNN and NBC in recent hours, told the Concordia Summit in New York: “I’m not Bernie Sanders.” And: “I’m not a populist. But I’m a realist” (by contrast to Mr. Sanders).

It is a gigantic victory for Mr. Sanders, the causes he champions and the supporters he inspires that Mr. Biden now offers high praise for the true candidate of progressive populism who months ago he told potential large campaign donors he was not like!

Ladies and gentlemen, when a politician says he has learned to never say no about running for president what he really means that he is looking toward the skies in prayerful reflection with the hope that the opportunity arises to say yes!

I consider myself friendly to both the Clinton campaign and the Sanders campaign and will support either one with enthusiasm against whomever the Republicans choose to nominate.

The state of the Democratic race is this: wide-open and exciting. A hard charging race to the finish line will begin momentarily. The invincibility of Hillary Clinton is over and the blackout of Bernie Sanders is ending. Hillary Clinton continues to lead the race for the nomination but Bernie Sanders is also a thoroughbred candidate rounding the bend from the outside and making a hard-charging finish to the finish lines in Iowa and New Hampshire that would well lead to a photo finish for the first two states that vote to choose the Democratic nominee.

Make no mistake. Vice President Biden has made a big move that will help Mr. Sanders in Iowa and New Hampshire while he waits on the sidelines hoping Mr. Sanders wins the early states and the spotlight of the nation might somehow, then, return to him.

Whatever else happens in the hotly contested horserace for the Democratic nomination, because of the rising candidacy of Mr. Sanders the voice of the progressive populist will now be heard from sea to shining sea and the world will soon learn that there is a helluva lot more to American political life than the anger-ridden rants of Donald J. Trump. 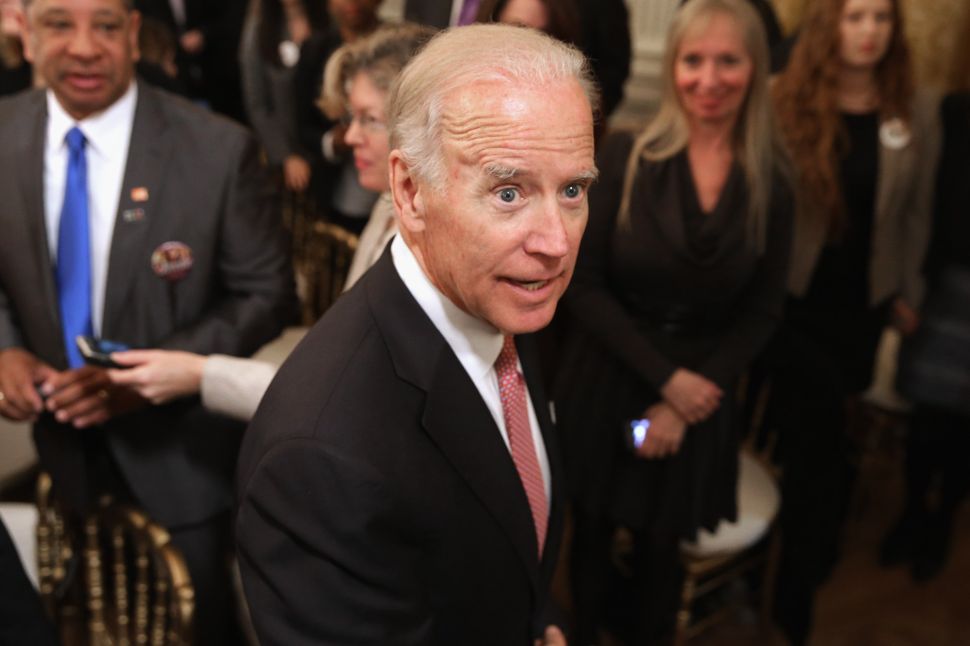