First and third from left: Brown and Schepisi at Thursday’s hearing

TRENTON — In a hearing of the Assembly Judiciary Committee, legislators heard public testimony on a suite of Democratically backed constitutional amendments. With no action to be taken Thursday, the hearing quickly became an opportunity for members of the committee to attack each other.

Chris Brown (R-2) and Holly Schepisi (R-39) led the charge, with Brown taking another of many opportunities to attack the North Jersey casino amendment and Schepisi questioning the Democrats’ tactic of bypassing standard legislative channels to change the state constitution instead.

Chairman John McKeon (D-27) bristled early in the proceedings when Brown tried to question a witness’ claims about new casinos’ benefits, telling the Atlantic County assemblyman that he would not be permitted to question those testifying.

“I’m very confident, as is everybody, that you’ll be able to make the comments that we all know you’re going to make,” said McKeon.

Schepisi questioned the way one amendment to change redistricting standards had reached the Judiciary Committee in December, before it saw testimony. She said at the time that members of the Assembly had not been supplied with information about the bill before it reached committee. It passed that day.

“We were here to do a job, you obviously were not,” she said to McKeon, who is primary sponsor of that bill.

Saying that another of the amendments, to dedicate gas tax revenues to the ailing Transportation Trust Fund, hinges on “revenue that everybody admits does not exist,” Schepisi questioned the coherence of the Democrats’ combined efforts.

“If we are looking to expand gaming in the state, why in god’s name wouldn’t we have discussed potentially allowing a portion of projected additional revenue to be utilized to pay some of these obligations, rather than putting them toward additional pet projects?”

Brown continued in the vein that has marked him as one of the casino amendment’s fiercest opponents, claiming that a North Jersey delegation seeking short-term gain had failed to live up to the original intentions between allowing gaming in Atlantic City back in 1976. He pointed to Senate President Steve Sweeney (D-3) and Governor Chris Christie’s 2011 five-year moratorium on North Jersey expansion.

“Atlantic City was not given even the five years it was promised, and it was done in a manner that, from a policy standpoint, was designed to fail from the beginning,” Brown said. “We have power brokers, money men and others who are pushing for their own interests, as opposed to truly the interests of the citizens of New Jersey.”

“We decided that we would allow this vice to come into our state not so we could put in onto our general revenue fund, but so we could find an opportunity to provide jobs, economic growth, and in a way to look out for and care for all of our families in New Jersey,” he continued. ““If you truly care, you would not be pushing to double that unemployment where it’s already ten percent.”

Assemblyman Ralph Caputo (D-28), a key supporter of the amendment and a former Atlantic City casino executive, shot back.

Calling the debate over competing versions of the expansion bill from Sweeney and Assembly Speaker Vince Prieto (D-32) a contest to see “whose bill is bigger and better,” Schepisi wasn’t hopeful that the effort would get on the ballot next November.

“I probably have a better chance of being speaker tomorrow,” she said. 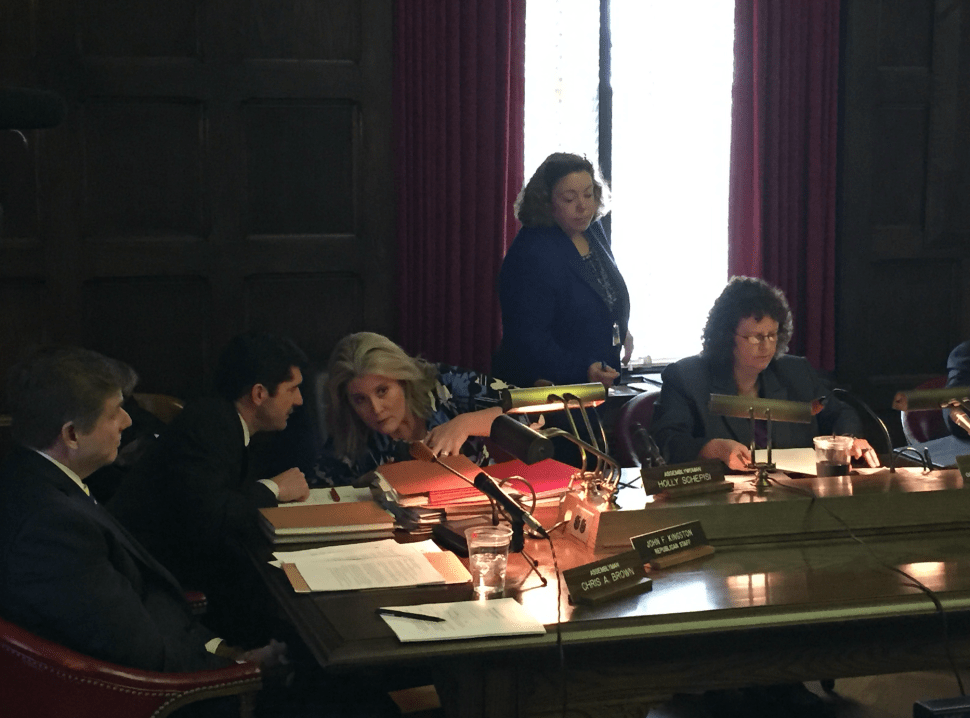