Negative stereotypes of African Americans are, sadly, as old as America. But now, one exhibition is looking at the positive way artists have combated racist imagery in art and the culture at large.

This is the subject of a new exhibition that opens tomorrow at Yale University’s 32 Edgewood Gallery on the New Haven, Connecticut campus, titled “Black Pulp!”, which displays 90 years of comics, magazine images and fiction drawings—alongside the work of some heavyweight contemporary artists—that upend racial stereotypes with comedy or irony.

Artists William Villalongo and Mark Thomas Gibson are the minds behind this provocative exhibition, which delineates how both fine and graphic artists, from early American illustrators to contemporary art stars like Kara Walker and Kerry James Marshall, have fought the long tradition of racist imagery in this country with their own images of African Americans.

“I think we’re trying to talk about the notion of how black people have developed strategies to own their own image within a racist social history and we’re telling the story through printed media,” said William Villalongo to the New Haven Register.

Mr. Villalongo, whose own work is represented by Susan Inglett gallery in Chelsea, has a strong history of fighting racist depictions in contemporary art.

In 2012, he spearheaded a petition against New York Times art critic Ken Johnson along with a handful of other artists regarding two of his pieces, one of which was a review many found problematic on an exhibition of African-American art called “Now Dig This! Art and Black Los Angeles 1960-1980” at MoMA PS1. In the petition, Mr. Villalongo criticizes Mr. Johnson’s periscopic review, stating: “Mr. Johnson suggests that a marginalized group’s lack of success is due to their own failures and not those of the ‘predominantly white high-end art world.’ In doing so, his texts read as validations of stubborn inequities.”

But the Yale exhibition, unlike many curated shows in the past that have focused on derogatory stereotypes, takes a look at art that has aimed to propagate positive or nuanced representations of African Americans. “The conversation around black subjectivity is almost always in relation to derogatory imagery,” said Villalongo. “What we’re trying to say is ‘we’re presenting black culture. Derogatory imagery is white culture.’”

The art world has a history of issues with racial insensitivity, highlighted by a 2007 show at Deitch Projects titled “Mail Order Monsters,” which was set to feature a 7-foot picaninny doll by an artist named Wes Lang. The work, which Mr. Deitch deemed “superficially incendiary,” was removed before the show officially opened.

But the casual promotion of racist imagery still emerges in politics as well as other areas of daily American life, and these artists are exploring the ways to counteract that.

“Sometimes when we were thinking about it and the exclusion of a high amount of the derogatory stuff in film and printed matter … it’s almost like we presented this clear alternative universe,” said Mr. Gibson. 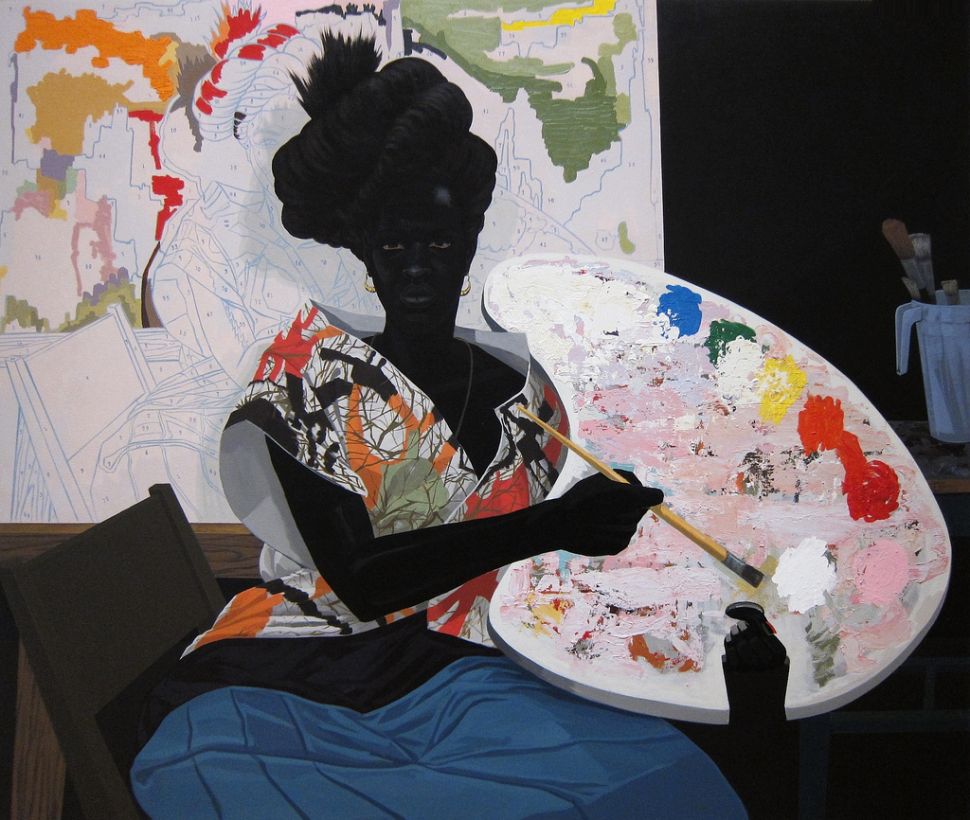