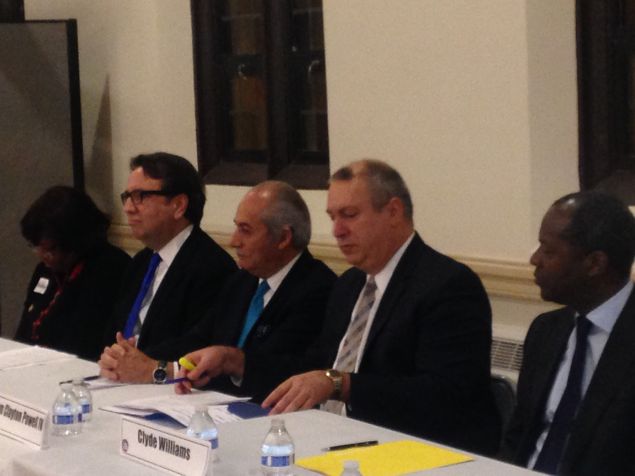 Three candidates competing for the soon-to-be-vacant seat of retiring Congressman Charles Rangel trashed Mayor Bill de Blasio’s affordable housing plan at a debate tonight—all of them arguing that most of the new units produced would still be out of the price range of the district’s constituents.

But the rival Democrats debating tonight pointed out that most residents of the district make between $20,000 and $40,000 a year, meaning the new apartments would simply be inaccessible to them and their grown children.

“I will be against any plan that does not include them,” he continued.

Mr. Williams noted that the brackets for affordable housing are based on a federally determined figure called Area Median Income, which does not break down at a neighborhood-by-neighborhood basis, but instead looks at incomes across the entire New York City metro area. The former Department of Agriculture employee promised to lobby to change the parameters of AMI if elected—but indicated he would oppose the de Blasio plan until the calculus changed, given that nearly a third of the district lives at or below the poverty level.

“For you to tell me that they want to do rezoning, then you’re going to tell me that you have to make $65,000 a year does not make sense,” he said to applause. “The people who live in this community now cannot afford that. So there is no way that I would accept that and think it was good.”

Mr. Powell told the audience his own 26-year-old son was only recently able to locate an apartment he could afford, and noted many of the residents of the district have a similar situation.

“You have some kids that are 30, 35-years-old that are still living with you,” he said, vowing to get more federal funding for affordable housing, which has been hard to come by for some three decades. “We’ve got to work together to make sure we have some semblance of a neighborhood, especially for our young ones, otherwise we’re going to lose our neighborhood.”

The de Blasio administration did not immediately respond to requests for comment. However, in the past, spokespeople for the mayor have pointed out that the $46,600 and $62,000 figures would be mean incomes, and people making both more and less would be able to obtain the new affordable units.

They have also maintained that it would be prohibitively costly for developers to have to build housing for the very lowest income brackets.