I’m at a weird crossroads with myself—a place I never thought I’d be in. At the start of last night’s Challenge episode I prayed to the MTV Gods…Kennedy, Kurt Loder, Carson Daly, and Tabitha Soren…please, please don’t do me dirty like you did last week. Don’t bring CT in just for a competition demo. Let him loose. And they did. Sort of. But by the end of the episode, I was not feeling it. Yeah, it was a dope moment. But every CT moment is good. I am here for any CT highlight reel. And just like when it happened to John and Tyler all those years ago in Cutthroat, it messes with the integrity of the game when you bring an outside hitman for a random elimination round. It makes for good tv but I am purist. The only people that should be competing are the ones in the game. Unless every week you bring back someone different and that’s the whole conceit of the elimination round for that season. I am most def down with that. Get all the old champs together and throw them in. Don’t tell me Darrell can’t still handle business.

This week’s edit wanted it to look like everyone was gunning for John Bananas and Creepy Uncle Cousin Vince. Abe’s hatred of John is prob def the highlight of this season. His refusal to call Johnny Bananas anything but “John” is the best part of the last four weeks. The challenge this week involved swimming under through a chain of air pockets. It was that round in Sonic the Hedgehog where you are underwater and can only swim for so long so you have to find that crack in the ground that makes air bubbles so you can breathe some more and if you don’t you glow red and die. Abe was considering throwing this so that he could pull John into the elimination round and get him out. It also sounded like Abe was considered drowning John when they were under the together. Even Cara made a couple jokes about John not making it out of this elimination alive. Whatev, John is too strong, too slippery, too cunning. If you were paying attention, we got to see one of John’s many tricks he uses to stay in the game. He does the late-night Club pep-talk. After the competition is over, when the hour is late, when you’re lit and feeling good, John comes crawling over and gets in your ear. Then a day later you vote the way he wants and don’t know how it even happened. Next thing you know, you wake up on an airplane heading back home because he backstabbed you and you’re out. He’s that dude from Inception mixed with DJ Tiesto.

Abe wants to play this game with honor and dignity so he doesn’t throw the challenge or drown a minor television celebrity. Instead, they work together like the Monstars except they actually win. The Blue Team only gets Jamie and Mike across. Even though it’s tied 2-2, they lose because they took longer. So no Abe-John Pit matchup. Some people want to vote Vince in but Vince absolutely does not care what anyone thinks, which makes him a perfect villain to go along with his slippery cousin—get it, Bananas peel. Jenna and Brianna consider throwing Vince in, they’re the swing vote now. But in the end, everyone goes against Jamie, even though he’s got the good Boston accent and actually completed the challenge. Mike ends up volunteering to go in even though he’s been in a bunch of eliminations and also completed the challenge. Abe calls everyone a bunch of bozos but they’re all so happy they’re not going into The Pit, nobody really cares. You don’t get any extra money for playing the game honorably, whatever gets you to the end, gets you there. People who take the “high road” on these shows usually aren’t so successful…except for Landon who is a king amongst men.

Since the elimination round is Jamie vs. Mike, it means that it is also Cara vs. her boyfriend, Abe. But when they get to The Pit, there is a surprise. They’re not playing against each other. They’re playing against CT and Zach, two of the biggest, strongest competitors in the history of the game. Jamie has to go against CT, which is really just a battle for who has the better Boston accent. I mean CT clearly has the best Boston accent but Jamie was nothing to sleep on Boston accent-wise. The elimination round had the players on either side of a wall with three poles sticking through. Each guy had to grab an end and pull it through to their side. CT looked like he was going to pull that boy through the hole with the pole. CT was hanging off the side of this wall like an alternate version of King Kong where he is bulletproof and all the planes crash horribly and then King Kong just takes Fay Wray and they move into a condo together and live happily ever after. CT swept Jamie. Then Zach came in and did the same to Mike. Zach beat Mike so hard, Mike looked like a foosball player when you spin the handle and the little guy goes around a bunch of times. Jamie ends up winning strictly off holding on for a little bit longer.

The thing is, as much as I wanted to see CT compete, this twist altered the game. What if Mike beat Jamie and Abe came back? I don’t want to see this game without Abe. He made it interesting after Tony left. Now it’s all up to my new fave Jenna to pull off an upset win. Maybe seeing her boyfriend Zach with his new shaved head will give her the lift to get it done. Otherwise, her cousin Brianna will be back in the bakery. Brianna has a job in the bakery because her dad owns the bakery. Only three more episodes to go… 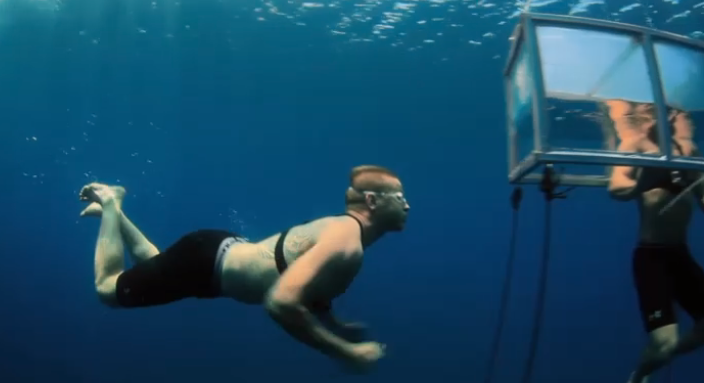