Updated: [January 13, 2015, 12:40 p.m.] An exhibition in Tel Aviv honoring the victims of the January 7, 2015 attacks on French satirical magazine Charlie Hebdo and featuring imagery of the Prophet Muhammad was allegedly censored, according to news reports.

Artwork by Vladik Sandler showing Muhammad posing as a nude model was reportedly removed from the show after complaints from the French Embassy, according to the Times of Israel; while a piece by Roy Friedler that depicted the murdered Charlie Hebdo cartoonists being greeted by the Prophet in heaven was covered over with a sticker.

Mr. Sandler wrote in a post on Facebook that he learned his work had been removed when he arrived at the exhibition opening, and was told the action was taken after a “special request from the French Embassy.” (Mr. Sandler has since removed his Facebook post alleging that artwork was removed and thus censored from the exhibition).

But a spokeswoman for the French Institute told the Observer that the artwork was not shown because only one artwork per artist was selected to be featured in the show, and denied censoring the depiction of Muhammad. She added that for artists that submitted multiple submissions, as Mr. Sandler did, all of their artwork—including images of the Prophet Muhammad—were printed in full in a free newsletter that was available at the exhibition. She also denied that the French Embassy had involvement over which works were shown.

Artist Mr. Sandler, on Facebook, wrote: “I have been left with a feeling of terrible sourness that those people, whose only crime was dark humor, died for naught and that any symbolic heritage that they might have wanted to leave behind—has gone to the trash or is hiding behind red stickers of censorship.”

The spokeswoman also claims the decision to place a sticker over artwork by Mr. Friedler was done in cooperation with the exhibition’s curator, and with the artist’s knowledge.

The attacks in Paris of a year ago left 11 staffers at the Charlie Hebdo magazine offices dead.

In a statement to the Israeli financial news organization Globes, Mr. Friedler said, “One day before the opening they told me that there was a problem with [my cartoon]. Because I only sent in one caricature, they wanted to put it in and also to satisfy the embassy, but they said that [the picture] would either be censored or not there at all.”

The exhibition, titled “Apres Charlie (After Charlie),” opened January 7, and runs through the month of January at the French Institute.

The Institute will also be hosting a public debate on the history and role of caricature on January 24 and 28. 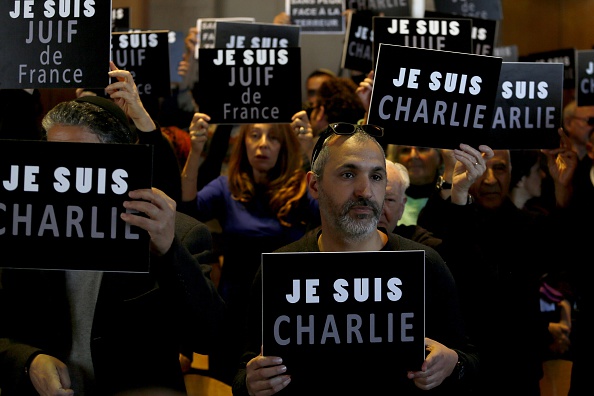