Declaring that “greed is not good” and Wall Street’s “fraud” and “dishonesty” had sunk the American economy, Sen. Bernie Sanders of Vermont vowed to aggressively regulate and reform the financial industry, building on many of the themes he has espoused during his insurgent campaign.

Mr. Sanders, reflecting an ongoing shift in the campaign as the first primaries and caucuses loom, blasted Hillary Clinton, his top rival, for proposing overhauls of Wall Street that some liberals say don’t go far enough.

“Greed, fraud, dishonesty and arrogance, these are the words that best describe the reality of Wall Street today,” Mr. Sanders, an independent and self-described democratic socialist, said today at Town Hall in Midtown, just a few miles from Wall Street. “So, to those on Wall Street who may be listening today, let me be very clear. Greed is not good. In fact, the greed of Wall Street and corporate America is destroying the fabric of our nation.”

Mr. Sanders took aim at large financial institutions that had received bailouts following the 2008 crash, calling for so-called “too big to fail” banks to be eliminated. He said that within the first 100 days his administration, he would require the secretary of the Treasury Department to establish a “too big to fail” list of commercial banks, “shadow” banks and insurance companies whose failure would pose a “catastrophic risk” to the United States economy without a taxpayer bailout. Within a year, he said, he would break up these institutions.

“If Teddy Roosevelt, the Republican trust-buster, were alive today, he would say ‘break ’em up.’ And he would be right,” Mr. Sanders said, again calling for the reinstatement of Glass-Steagall, a law repealed by the Clinton White House that kept a wall between commercial and investment banking.

A President Sanders would aggressively prosecute Wall Street executives who avoided jail time for activity that contributed to the financial collapse. “Not one major Wall Street executive has been prosecuted for causing the near collapse of our entire economy. That will change under my administration,” he said, reading off headlines from news stories about banks who faced fines for illegal financial activity.

“The reality is that fraud is the business model on Wall Street. It is not the exception to the rule. It is the rule. And in a weak regulatory climate, the likelihood is that Wall Street gets away with a lot more illegal behavior than we know of.”

Other Sanders proposals included capping ATM fees at $2 and capping interest rates on credit cards at 15 percent. He said he would turn credit rating agencies into nonprofit institutions and bar banking industry executives from serving on the board of the Federal Reserve.

The Brooklyn native previously appeared at Town Hall last September for a campaign rally. Like then, he was serenaded by adoring fans. Unlike last time, area elected officials were there to support him, like Queens State Senator James Sanders, who introduced him.

The Democratic front-runner, Hillary Clinton, has stopped short of calling for the end of major financial institutions. Mr. Sanders has assailed her ties to Wall Street, while Ms. Clinton and her allies say Mr. Sanders hasn’t done enough to address “shadow banking,” the extensive trading of derivatives and other complex financial instruments that helped trigger the 2008 crash.

“Now, my opponent, Secretary Clinton says that Glass-Steagall would not have prevented the financial crisis because shadow banks like AIG and Lehman Brothers, not big commercial banks, were the real culprits,” Mr. Sanders shot back. “Secretary Clinton is wrong.”

“Shadow banks did gamble recklessly, but where did that money come from? It came from the federally insured bank deposits of big commercial banks, something that would have been banned under the Glass-Steagall Act,” he argued.

“My opponent says that, as a senator, she told bankers to ‘cut it out’ and end their destructive behavior,” he continued. “But, in my view, establishment politicians are the ones who need to cut it out.'”

This story has been updated to reflect that Mayor Ras Baraka of Newark was not attending Mr. Sanders’ speech today. James Sanders, the Queens state senator, incorrectly said the Newark mayor was in attendance and backing Mr. Sanders. A spokeswoman for Mr. Baraka said the mayor had been in New Jersey all day and has yet to make an endorsement in the race. 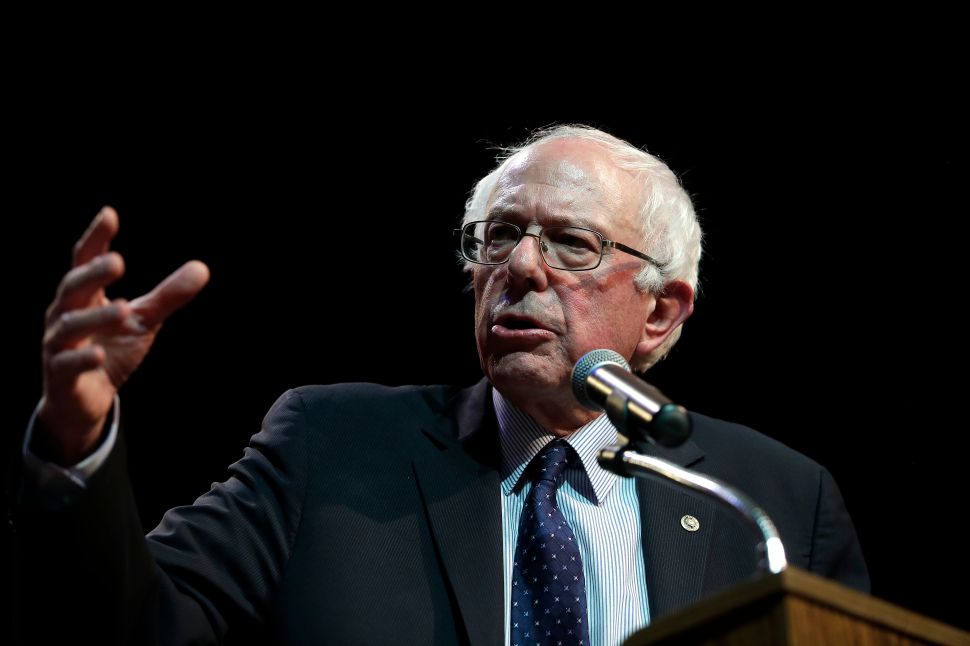