Councilman Ritchie Torres of the Bronx, as he himself admits, is something of a paradox.

He is a college dropout who quotes Nietzsche. He assiduously courts the press yet dreads public speaking. He distrusts power—and wants more of it.

At 27, Mr. Torres is the youngest member of the City Council, and in possession of the God-given and man-made gifts that future mayors, governors and senators are made of. In a city where identity politics reign supreme, he happens to be black, Hispanic and gay. As chairman of the Committee on Public Housing, he is fast mastering housing policy, while also speaking out on policing and LGBT issues.

“I like to defy preconceptions,” said Mr. Torres in a recent telephone interview. “I’m a college dropout, but I have the vocabulary of a professor. I enjoy being interesting.”

The quote comes off as boastful, but Mr. Torres is not much like the enfant terribles who have stormed the gates of municipal politics before him. He does not enjoy glad-handing, he is deferential to elders and has a Mario Cuomo-like penchant for self-analysis. “I’m a serial first-dater,” he said. “I lack the time to follow up because my life is so consumed with events, press conferences, hearings—all the features of political life.”

Elected in 2013, Mr. Torres grew up in public housing in the Bronx. He enrolled in NYU, but left school to work for Bronx Councilman James Vacca and quickly rose through the ranks as a key staffer. When Mr. Torres decided to run for office, he earned support from many labor unions and liberal organizations, though the Bronx Democratic machine backed another candidate. After winning his race, he flashed his political acumen, becoming the first Bronx elected official to support Melissa Mark-Viverito’s successful bid to become speaker of the body.

Mr. Torres cited holding the first-ever Council hearing in a public housing development as his proudest moment in office so far; the unorthodox stage offered working-class constituents the rare chance to observe governance up close.

Mr. Torres generates more press than most of his colleagues. He frequently sponsors legislation, such as a bill last year to license industrial laundry plants (which critics argue often endanger employees who handle dangerous chemicals) and offers up biting—and quotable—critiques of the mayor or his police commissioner, Bill Bratton.

For example, he once told the Observer that Mr. Bratton, revered in law enforcement circles, is an “arrogant, imperious commissioner who plays by his own set of rules, feels accountable to no one but himself, and drips with disdain for democratic law-making.”

The Bronx councilman said he is simply in awe of no one.

“There’s no place for idolatry in politics,” he said. “I’m inspired by Nietzsche. He wrote Twilight of the Idols and was irreverent toward idols like Socrates, even Jesus Christ,” he said. “I have a deep suspicion of power.”

Mr. Torres wishes the Council, which wields far less power than the mayor, had a greater staff capacity to conduct more stringent oversight hearings; the councilman feels most at home when he’s grilling city agency heads. “The Council,” he fretted, “has broad powers under the charter, but lacks the resources to exercise that power to its full potential.” Therefore, he continued, “there’s far less respect for the Council than there should be” and “the mayor’s office sucks up all the oxygen in the room.”

Mr. Torres, who is able to serve in the Council through 2021, admits he wants a promotion—eventually.

“I am intent on advancing politically,” he admitted. “What that looks like remains to be seen.” 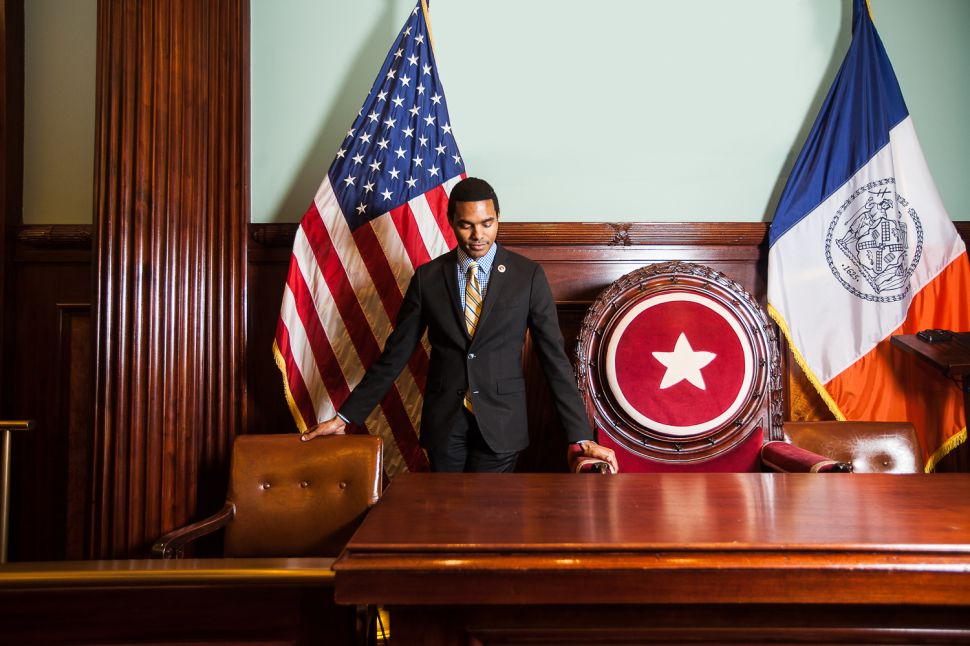