U.S. Attorney Preet Bharara insisted in a speech today that the environment of state capitals like Albany must change in order to properly do the important work of governing.

The prosecutor who brought down former Assembly Speaker Sheldon Silver and ex-State Senate Majority Leader Dean Skelos on fraud and extortion charges last year addressed the Tina Brown Live Media’s American Justice Summit at John Jay College this morning. He refused to back away from his claims that Albany is a “cauldron of corruption,” and had an endemic and systemic atmosphere of permissiveness that allows for misconduct, just like some corporations do.

Mr. Bharara stressed that he believed only a small percentage of officials in Albany engage in illegal activity, but suggested that the environment there encouraged their more upright peers to overlook misconduct. He urged politicians to report to and cooperate with prosecutors when they see evidence of wrongdoing.

“Culture is whether people who think bad things are going on come forward and say something, instead of being afraid and watching it happen in silence,” he said. “Good people have to come forward.”

The U.S. Attorney acknowledged that many people are either unaware or indifferent to what goes on in state government, but insisted that it impacts people’s lives—and so must be straightened out.

“Legislatures actually matter,” he said. “They decide, often, what kind of taxes you’re going to pay, they decide how your children are educated, they decide what is a crime and what is not.”

Worse, corruption discourages the public from taking an interest in government, perpetuating a cycle of growing misdeeds and growing distrust.

In the end, he asserted there was a limit to what he could do, and argued lawmakers have to take it on themselves to change Albany.

“You can’t solve anything fundamentally with prosecutions,” he said. 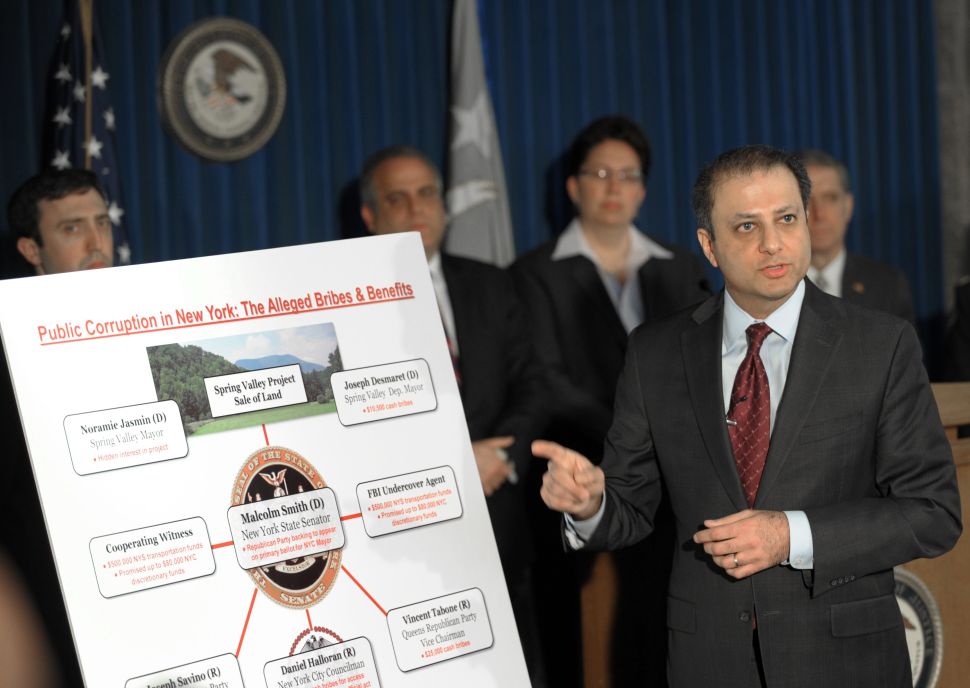