After negotiations to reform and extend the controversial 421a tax break for housing developers collapsed last week, Mayor Bill de Blasio and Gov. Andrew Cuomo said they would both make finding a new way to spur affordable housing a priority this year.

“The biggest item of concern is that the affordable housing program that we hoped would pass did not pass,” Mr. Cuomo told reporters today after a Martin Luther King Jr. Day event. “Right now, we have no affordable housing program that’s operating in the City of New York, and that is a major concern for the mayor and for myself, and that’s been our number one topic of conversation.”

Many in the real estate industry see the property tax credit as crucial to offsetting the high cost of buying land and building rental housing (which is subject to higher property taxes than condos) in New York, while some tenant advocates have argued that 421a subsidizes the development of luxury housing that makes neighborhoods less affordable and pushes out older residences. The program was launched in the 1970s to spur development in the city’s bad old days, but in recent decades was changed to include requirements for affordable housing in certain parts of the city.

Mr. de Blasio, in pursuit of his goal to build or preserve 200,000 units of affordable housing in a decade, wanted Albany to renew the tax credit but require all developers getting it to build affordable housing, no matter where their development was, and also wanted the program to include a mansion tax on sales of residences worth $1.75 million or more. Mr. Cuomo, meanwhile, had said he wouldn’t support a renewal if it didn’t contain a prevailing wage for construction workers, something Mr. de Blasio said would be too costly.

“I’m deeply disappointed that this plan that we believe fundamentally was better for the taxpayers—ended the subsidies of large amounts of luxury housing by the taxpayers, achieved more affordable housing, cut the city’s subsidies, just look at the benefits of this plan,” Mr. de Blasio said today at a Brooklyn press conference. “It was something where there was a real consensus in the city, where there was progress and reform. So I’m deeply disappointed that the way it was pursued has failed in terms of the Albany process. And Albany has a chance to make it right and fix it—because this is crucial to continuing the work we need to do to create affordable housing.”

The end of 421a is a complicated one. It was set to expire in June, when legislators in Albany—perhaps spooked by the role 421a and rent regulations had played in the indictments of former Assembly Speaker Sheldon Silver and Senate Leader Dean Skelos, now both convicted—were unable to come up with deals to extend either by the end of the session. A deal was eventually struck on rent regulations; on 421-a, the Legislature passed a six-month extension—to give the Real Estate Board of New York and Building Trades Council time to hammer out a deal that would renew the credit and include a prevailing wage. Those negotiations failed, and the tax credit expired Friday.

Mr. de Blasio said he was not worried about an immediate impact on his ambitious affordable housing plan, which has seen 41,000 units financed and secured over two years.

“In the short-term, in 2016, we’re quite confident of our ability to continue to produce housing at essentially the same clip,” he said. “Going forward, we do have to address this issue, and again, Albany has a chance to make real reform, to take a program that was unfair to taxpayers and wasn’t producing enough affordable housing, and fix it.”

“It’s gonna be up to the Legislature in terms of what replaces 421a,” he said. “We believe where there’s subsidies, there should definitely be prevailing wages.” 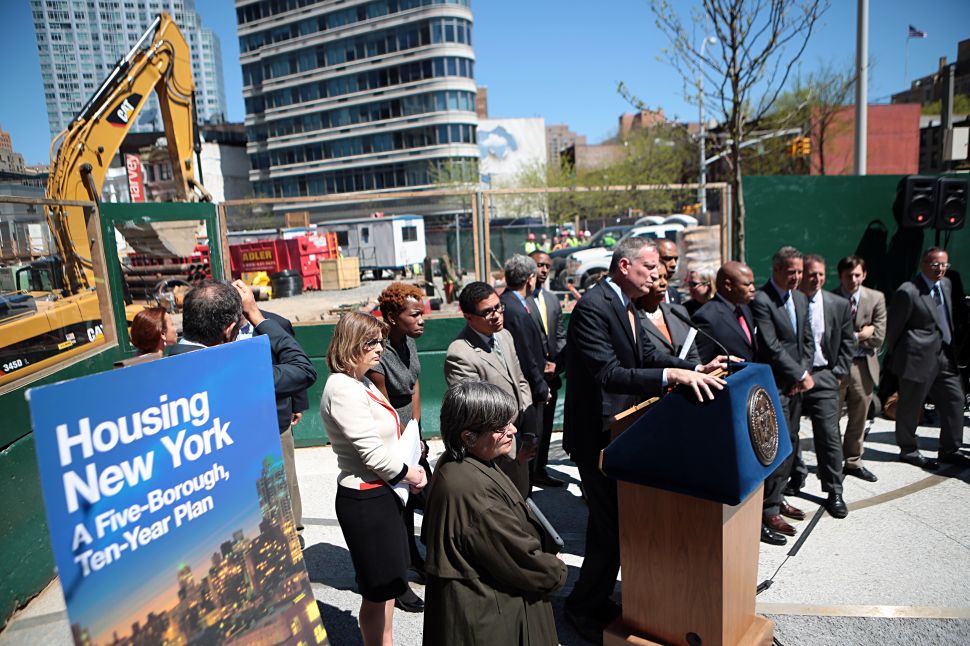