After tweaking Mayor Bill de Blasio’s handling of homelessness for months, Gov. Andrew Cuomo finally unveiled his plan to get involved—including appointing City Comptroller Scott Stringer to inspect the city’s homeless shelters and promising to close down those that don’t meet his standards.

“People have been attacked and victimized in some shelters, and some would rather stay outside in the frigid cold than risk entering—and they are right to do it,” Mr. Cuomo said today in his State of the State address. “Adding insult to injury, taxpayers fund over $1 billion for a dysfunctional statewide shelter system—it’s just unacceptable. It’s imperative that we improve conditions of the shelters and restore the public’s trust in the system. We need a true independent review, inspection and action plan from objective experts to go forward.”

And in New York, that objective expert is also a potential Democratic primary challenger to Mr. de Blasio in 2017—Comptroller Scott Stringer, who has already taken swipes at Mr. de Blasio over homeless shelters in an audit.

State Comptroller Thomas DiNapoli will oversee shelters statewide, and the Buffalo comptroller will do so in the state’s second-largest city.

But New York City has, by far, been the central focus of Mr. Cuomo’s rhetoric around homelessness, an issue that has become yet another flashpoint in the long-running feud between Mr. Cuomo and Mr. de Blasio, both Democrats. For not the first time, Mr. Cuomo promised today to get involved with his own staff—he said the state would supply Mr. Stringer with manpower if needed—and his own regulations in an area where he doesn’t think the city is doing enough, harkening back to his entry into the city’s response to ebola and Legionnaire’s Disease.

Mr. Cuomo said that the state and the comptrollers would “review operating and financial protocols of shelters.

“Shelters that they find to be unsafe or dangerous, we’ll either immediately add local police protection, or they will be closed,” Mr. Cuomo said.

In cases where the operator of a shelter—some shelters are run by nonprofits, others by the city’s Department of Homeless Services—shows systemic problems, the state may take them over and assign a receiver, Mr. Cuomo said.

“We need to know which are well-run and which aren’t, and we need to do something about those that aren’t well run immediately—and that’s exactly what this system will do,” Mr. Cuomo said.

Mr. Stringer’s duties and powers are a matter of the City Charter, which Mr. Cuomo cannot alter, but the governor emphasized that housing the homeless is a responsibility of the state under its constitution. Mr. Stringer already has oversight powers, and the governor’s office said the state already has the authority to shut down the city’s homeless shelters if they deem them dangerous.

In a briefing with the media after Mr. Cuomo’s speech, Mr. de Blasio said he believed the announcement today had not granted Mr. Stringer any new powers, pointed to his own directions to the Department of Investigation to look into shelter conditions, and said Mr. Cuomo’s plan “could be very consistent with our goal of making sure that every shelter is fixed.”

But while the auditing part is line with Mr. Stringer’s existing authority, the closures of shelters are “an entirely different matter that has to be worked through.”

“If providers can do a good job, we just want to help them get the problem fixed and move forward,” Mr. de Blasio said. “We may find some providers that need to be replaced, and I’m totally willing to do that,” but how to do that needs to be determined, he said.

As recently as yesterday, Mr. de Blasio’s office indicated he had not yet been briefed on Mr. Cuomo’s plans for the homelessness in New York City. But today, Mr. Cuomo said he’d “developed this approach with our local partners across the state.”

Mr. de Blasio has repeatedly asked Mr. Cuomo to increase state funding for homelessness services, leading to no new deal to renew the program—while Mr. Cuomo has repeatedly admonished that throwing money at the problem wasn’t the answer, better management was.

But today Mr. Cuomo announced plans to pour state money into the issue: $20 billion over five years— to help fun 100,000 units of affordable housing across the state, and to pay for 6,000 new supportive housing units over five years and 1,000 emergency beds. The governor also pledged to fund 20,000 supportive housing housing units across the state over 15 years.

That announcement comes after Mr. Cuomo and Mr. de Blasio were unable to reach a deal to renew the NY/NY program, through which the state and the city have shared the cost to build supportive housing—which provides services on site to vulnerable, formerly homeless residents. Mr. Cuomo wanted the city to pay a larger proportion of the bill than it had in the past; Mr. de Blasio wanted the split to remain unchanged and for Mr. Cuomo to commit more units to the city.

Eventually, Mr. de Blasio announced his own proposal—a plan to build 15,000 units over 15 years for $2.6 billion. Mr. Cuomo’s plan is larger, but it is unclear how many of the 20,000 beds he has proposed would be in New York City.

The dueling proposal come as the two men have already seemed to to be trying to out-progressive each other on issues like hiking the minimum wage last week.

And Mr. Stringer wasn’t the only foe of the de Blasio Administration that Mr. Cuomo cozied up to in his speech today—the governor heaped praise on former Police Commissioner Ray Kelly, who was in attendance, and said he would seek to enact his recommendations on fighting terrorism. Mr. Kelly became embroiled in a public feud with current Police Commissioner Bill Bratton, whom he accused of fudging crime statistics to show a lower number of shootings—an accusation Mr. Bratton called “outrageous” and dare his predecessor to back up.

And Christine Quinn—the former council speaker who served as an advisor to Mr. Cuomo, ran against Mr. de Blasio for mayor and now leads for Women In Need, a nonprofit that helps homeless women and families—was quick to praise the governor’s plan.

“Governor Cuomo’s proposal is poised to be a game-changer,” she said in a statement. “It’s clear that the Governor understands that any solution requires approaching the issue from a range of angles and including affordable and supportive housing with comprehensive services is absolutely essential to the equation.” 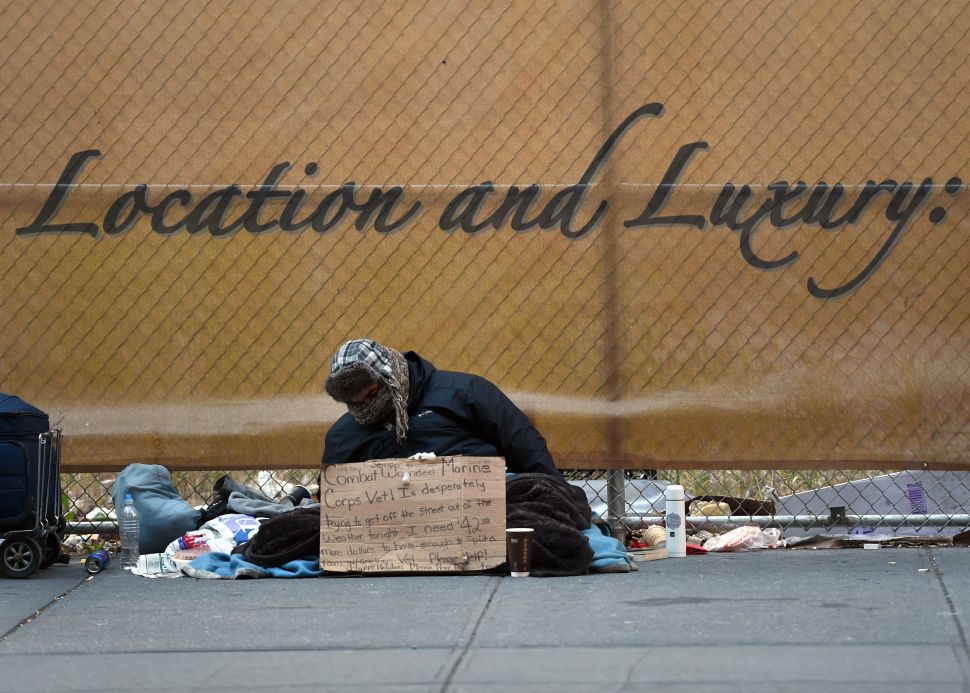