Gov. Andrew Cuomo announced that his second term would see the “biggest construction program in our state’s history, period”—and at the heart of it would be a remade Pennsylvania Station.

In a presentation in the lobby of Madison Square Garden, the governor lambasted the dim, dingy transit hub beneath his feet, which replaced the far grander original Penn Station that was demolished in 1963. He noted 650,00 people pass through the depot daily, more than the combined human traffic of John F. Kennedy, LaGuardia and Newark Liberty airports.

“Penn Station is un-New York: it is dark, it is constrained, it is ugly, it is dated architecture, it is a lost opportunity. Travelers are relegated to a bleak warren of corridors. Frankly, it’s a miserable experience, to cut to the chase,” he said. “And to really cut to the chase, it is a terrible introduction to New York.”

The comments echoed remarks Mr. Cuomo made last year about LaGuardia, in announcing its planned $4 billion overhaul. That development, combined with renovations and revamping of JFK, of  Republic and MacArthur airports on Long Island, of Stewart Airport in the Hudson Valley and the $26 billion investment in the Metropolitan Transportation Authority, would constitute the “biggest construction program in our state’s history, period” according to Mr. Cuomo.

A reimagined Penn Station would sit at the “nexus” of all the projects, and would see its current traffic double within two decades under the governor’s plan. The redesign would incorporate the late Sen. Daniel Patrick Moynihan’s decades-old plan to convert the Farley Post Office on the other side of Eighth Avenue into an Amtrak station, with a subterranean pavilion joining the two structures.

The plan would either call for the demolition of the MSG Paramount Theater so as to make way for a glassy entrance on Eighth Avenue, close 33rd Street to place the gateway and several skylights there, place the main entrance on Seventh Avenue or build multiple smaller entrances at the corners and midblock. All three proposals would bring daylight and new retail into Penn for the first time in decades.

“New York’s success for the next 100 years depends on what we do and what we plan today,” Mr. Cuomo said.

The proposals for Penn will require the cooperation of James Dolan, owner of the Garden and the Paramount Theater, who appeared at the presser—and who Joseph Percoco, Mr. Cuomo’s former executive deputy secretary and personal confidante, went to work for last month.

“Of course, I am a businessman. But I am also a New Yorker, and firmly believe that this project is good for New York,” Mr. Dolan said. “As it advances, if there’s an opportunity to partner with the state, I will gladly take it.”

The state will form a joint entity with Amtrak—which owns Penn— the MTA and the Empire State Economic Development Corporation, and issue the request-for-proposal this week. 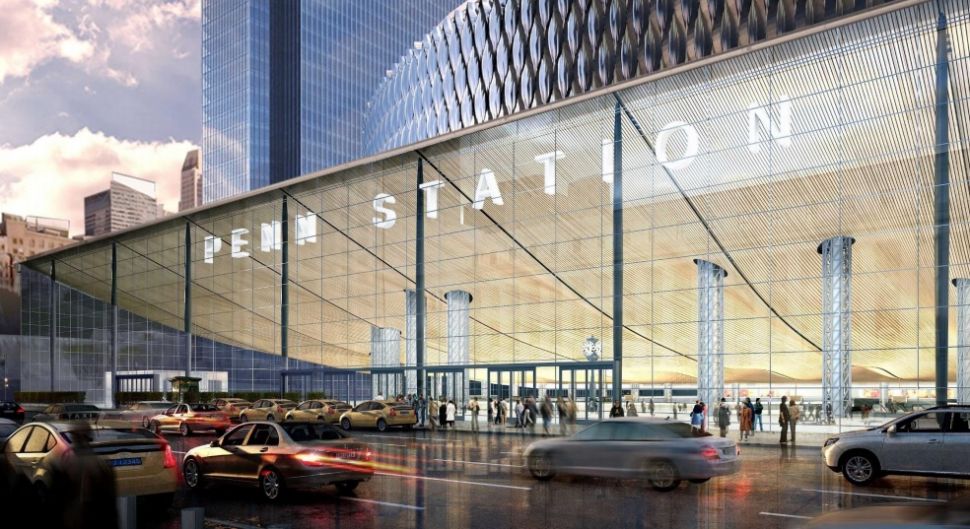