As Big Foster in WGN America’s Outsiders, veteran character actor David Morse keeps the long, white locks he sported as zen yoga-lecturer Eliot Bezzerides in True Detective‘s second season. That, however, is where the similarities between Bezzerides and Foster end. As the rightful leader of the Farrells–a family-turned-society which has lived off the grid in the Appalachian wilderness for the past 200 years–Morse’s Big Foster is a violent, calculating, and decidedly un-zen presence, one as open to murder as he is to jousting aboard an ATV.

We caught up with Mr. Morse at the Television Critics Association press tour to talk Outsiders, adding layers to a villain, and what it’s like to take part in not one, but two so-called “Golden Ages of TV.”

“[Big Foster] is kind of diseased, and damaged, but at the same time he has a real purpose.”

What initially attracted you to Outsiders?

My manager represents both Paul Giamatti and myself. She called and said there was as how that Paul was a producer on, and I knew if  Paul was invested it was a good sign. I got sent the script and I liked the world, I really liked what [creator Peter Mattei] was doing with the world, because it is something I hadn’t seen before. And the only thing I really didn’t care for was the role of Big Foster.

Because he was really written to be a bad, bad guy. Just a bad, nasty guy who got away with everything. I thought, “Well, that’s not really going to be fun as this thing goes along.” It’s not going to be smart, and not very real. If I was going to do it, we’d have to talk about it. TK was completely on board with what we were talking about. He was actually relieved to be talking about Big Foster in a more dimensional way. I figured if Peter is this open, and I liked the script, and WGN is really going to put themselves behind 13 episodes–let’s go do this. Let’s figure out this world.

Can you talk about how you did end up adding layers to Big Foster?

We just had to start with the reality of a guy who has thought he was going to be a leader forever. Since he was young he’s been told he’s going to be a leader, and all he does is drink and party and feel like a big shot. He has stewed, and rotted, and become angrier, developed this kind of alcoholic personality. At the same time the guy who has become those things understands most keenly the threat to their world and their way of life.

He’s kind of diseased, and damaged, but at the same time he has a real purpose.

“If a show is going to survive, if you want people to watch, you really have to be thinking differently. And if you don’t, audiences will smell you out.”

Just to take a step back, what are your thoughts on the TV landscape in general. It’s interesting to see you go from something like Eliot on True Detective, on a network HBO, to Big Foster on Outsiders.

So obviously the first series I did was St. Elsewhere, and lot of people say that time period was the golden age of television; Hill Street Blues, and St. Elsewhere and a lot of the shows that followed that. And now a lot of people are saying this is another golden age, or complaining because there’s too much to choose from and everyone is competing against each other. I think it’s fantastic, personally. If a show is going to survive, if you want people to watch, you really have to be thinking differently. And if you don’t, audiences will smell you out. Some viewers are comfortable with the old formulas, but I don’t think it’s so true with younger people. There are so many things to watch, and ways to watch, it’s really producing a very creative time on television.

As a cast member, are you aware of the cultural reaction to a show as it happens?

All you can really do is focus on the work. Everything else is out of your control. With True Detective…True Detective’s first season was so remarkable, anybody that watched it knew they’d seen something special. And it would’ve been hard for [True Detective creator Nic Pizzolatto] to repeat that for a second season. There was a lot of expectation and pressure on him for that second season that maybe was a little unfortunate.

But are you aware of that reaction, and that pressure, even as the series is ongoing?

You know, with St. Elsewhere, it really sort of redefined storytelling in a way, and television. The writers were doing things that just weren’t being done anywhere else on television. So you could feel it with that show, it was absolutely clear. Even though there weren’t a lot of people watching, it was clear this was new ground.

And you feel it when it’s not happening, too. When I was on Treme, unfortunately while we were doing it there wasn’t an audience for it. David Simon is one of the great minds in television, and it was hard to be on a show that had so much good work from so many good people, and has such a good reason for existing, and more attention isn’t being paid. And now I know people are binge-watching Treme and going “Oh, this is fantastic.”

I think that’s really the big change, is really being able to watch shows a bunch of episodes in a row. St. Elsewhere was cancelled because NBC couldn’t syndicate it. NBC picked it up for its seventh season but MTM, the studio, was losing money. It was because it was not like Law & Order, not like individual episodes, and nobody was watching television like that. Nobody was buying it. Now, of course, that’s what people want. It’s such a better viewing experience, and a better creative experience. 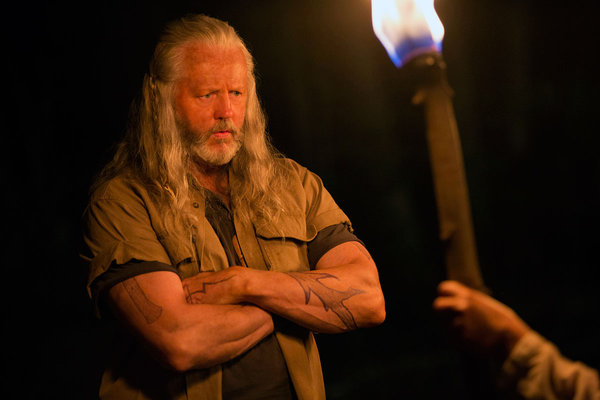