Each week, we’re going to rank our once-and-future legends from best to worst. Criteria includes bravery, usefulness, wit, the ability to not die, and the level at which they contribute to the destruction of all space and time. Let the best (worst?) hero win.

1) Leonard Snart / Captain Cold (↑ 0): It’s going to take a lot to unseat this hilarious, cold-gun wielding motherf*cker. Just the way Wentworth Miller says “Excuse you” after bumping into someone in a parking lot is worth, minimum, 15 Emmys, including a host of categories that don’t make any sense. Here’s the thing about Snart (and, sort of by association, Mick Rory): he’s the only one on the team who A) Knows his role exactly and B) actually feels like he has motivation to be there. Yeah, that motivation is villainous, and based on Snart’s love of stealing things, but it’s still somehow more than both HawkPeople. Those two have been destined to stop Vandal Savage for centuries, and still if you asked what their exact job on the team is they’d be like ¯\_(ツ)_/¯ but with wings.

2) Martin Stein / Firestorm (↑ 2): Martin Stein is one of two “geniuses” on the team, the other being Ray Palmer, but where Palmer’s ideas are consistently leading to the utter destruction of mankind’s future, Stein is busy finding actual information and showing the world he was, at one point in his life, handsome enough to bone Sara Lance (a little creepy, but still). He convinced two different people he was the head of a terrorist organization named SCIMITAR and Elon Musk (which, thinking about it, might be the same thing) This dude was straight fine with his younger self not meeting his future wife, all for the betterment of mankind. That’s like Marty McFly missing the Enchantment Under the Sea to rescue a cat from a tree. Same exact stakes.

So yeah, good for the older half of Firestorm for not only thinking on his feet, but growing out of a phase where he said things like “light a doobie” and thought that was okay.

3) Jefferson Jackson / Firestorm (↑ 3): Jackson flies up the rankings for being the first person here to land a shot on Vandal Savage, despite the fact Savage was literally standing on a stage at that arms deal, practically begging to be shot with something. And yes, technically it was both Jackson and Stein that landed said shot, but I have a feeling the side controlling the “blast people with fire” portion of Firestorm is not Martin Stein.

Hell, he’d be number one if he had just continued to light Savage on fire until Hawkgirl showed up, instead of walking out of the house like “Oh the immortal villain we traveled through time to stop? He’s inside.”

4) Sara Lance / White Canary (↓ 2): Canary falls down the list because this episode didn’t really give her much to do, but she’s still the most badass member of the team and whipped the collective asses of a room full of evil scientists while sporting a substantial weed high. That’s an ideal middle-of-the-pack performance.

5) Mick Rory / Heat Wave ( ↓ 3): Just as amusing as Leonard Snart but only a quarter as useful, Mick Rory burns his way down the rankings. And although getting caught by Savage wasn’t a huge setback so far (I mean, Hawkman died, but he’s died before so no biggie), Heat Wave just seems like a character primed to mess up so bad before this season is over. Like, if this show ends without Rory accidentally setting fire to a baby that would’ve grown up to be Mark Zuckerberg or something like that, I’d be shocked.

6) Rip Hunter (↑ 3): Yes, true, Rip spent the entirety of this episode on the ship doing nothing than grow more and more agitated with his teammates. But that’s…sort of endearing? If there has to be a character who exists solely to whine “cahmann guys, I’m a Time Masterrrr,” Rip is just charming enough for it to stay entertaining. He’s like Legends of Tomorrow‘s version of Marvin from Hitchhiker’s Guide to the Galaxy.

I will say this, though: What Rip does need to stop doing is acting like the rules of the timeline even matter at this point. Future-Martin brought young-Martin aboard a damn time machine, and didn’t even bother to erase his memory with Hawgirl’s mace. We’re going to act like Ray Palmer basically dropping a cufflink ended humanity but Sara Lance ripping a joint with a 25-year old Firestorm is cool?

7) Ray Palmer / The Atom (↑ 0): There are many actors who can make complex exposition sound natural and energetic. Brandon Routh, despite his boyish good looks, is not one of those actors.  “We just have to find the other part of my suit! Which shrinks because of an alloy which mimics intro-molecular comp–” zzzzzzzzzzzzzzzzzzzzzzzzzzz.

Oh, and the small fact Ray dropped a piece of his costume and effectively destroyed the Earth.

8) Kendra Saunders / Hawkgirl (↓ 3): Hawkgirl plummets toward the bottom for not being able to read the room. There is a time and place for relationship drama, and telling an ex-boyfriend you dated roughly 1000 years ago that you don’t have feelings anymore. The moments after you learn the universe’s timeline is skewed toward utter disaster because of your direct involvement is not that time, and not that place.

Plus, if Kendra is the only person who can wield the dagger against Savage, her awful desperate lunge–the one Savage avoided like a poorly thrown, bird-shaped dodge ball–does not bode well.

9) Carter Hall / Hawkman (↓ 1): Sorry Birdman, but it’s right there in the ranking criteria: “ability to not die.” Even without Hawkman’s latest of many deaths, Carter would be here at the bottom for a multitude of reasons. For one, he’s the one that still has his memories. Shouldn’t he know by now which part of the Hawk-Duo has to use that dagger? Come on, dude. Killing Vandal Savage has been your job for thousands of years. Get better at it. Apply yourself.

On the flip-side, Legends of Tomorrow would become the best show on television if it continuously resurrected Hawkman and killing him off again in increasingly absurd ways. Just something to think about, CW. 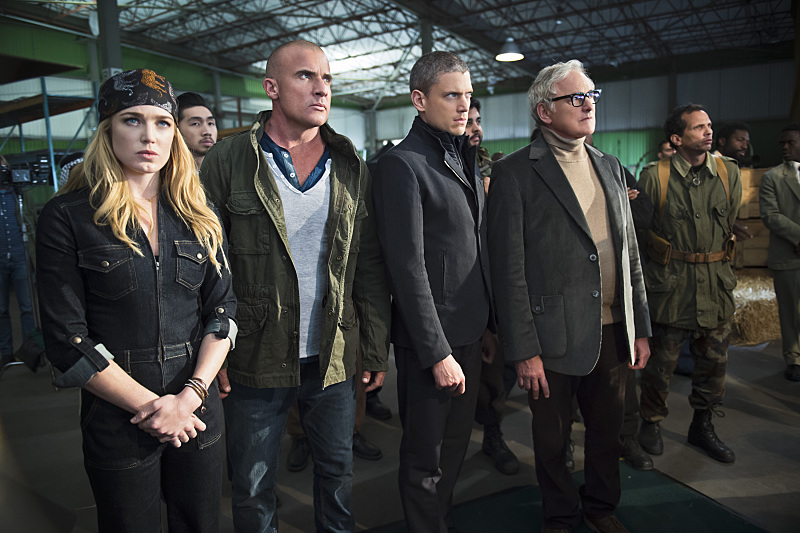