After resisting Council Speaker Melissa Mark-Viverito’s push to reduce and replace criminal penalties for numerous quality-of-life infractions for nearly a year, the de Blasio administration assented today to a set of bills that would allow beat cops to charge minor offenders with a fine-bearing violation instead of a misdemeanor, based on a criteria the NYPD would have to generate.

“The City Council, under the leadership of Speaker Mark-Viverito, has proposed smart, sweeping changes to how the city responds to low-level offenses,” Elizabeth Glazer, director of the Mayor’s Office of Criminal Justice, testified at a Council hearing today. “The administration supports creating the option for officers to issue a civil ticket.”

The bills under consideration today would let cops issue tickets in lieu of arrests or criminal summonses for drinking alcohol in public, which is the most common offense. It would eliminate criminal penalties entirely for spitting, urinating and littering on the street or in building lobbies.

Also reduced to a mere citation would be violations of various public park rules ranging from lingering past hours of operation to taking up too much space on a bench to climbing a tree.

They would also create a new penalty of community service that a civil tribunal can issue as an alternative to paying a fine.

The NYPD indicated today that it would consider a person’s history of past offenses as a determining factor as to whether an officer would choose to charge a violator with a misdemeanor. Additionally, the legislative package included a provision that will create a new penalty category for noise pollution, which would be upped to a misdemeanor if someone ticketed repeats the offense within 24 hours.

Ms. Mark-Viverito, a Democrat like Mayor Bill de Blasio, noted that criminal summonses for minor infractions exceed the number of felony arrests across the city. She also argued that civil penalties would eliminate the threat of a rap sheet tailing a youthful offender through life, and the danger of having a warrant issued for their arrest if they miss their court date—problems she argued disproportionately impact the poor and nonwhites.

“Too often it is low-income communities of color that bear the burden of these ineffective policies,” she said, insisting that the bills are part of a greater program of racial fairness. “It will create a system where the punishment fits the crime.”

In fact, representatives from the NYPD testified that they do not currently collect demographic data on criminal summonses—and that the geographic data they do gather indicates many are issued in lower Manhattan. But two bills in the package, sponsored by Manhattan Councilman Mark Levine and Brooklyn Councilman Jumaane Williams, will require cops to collect information on the race and sex of those issued tickets under the new program.

Bronx Councilwoman Vanessa Gibson, chairwoman of the Committee on Public Safety, emphasized that the proposals would not mean legalizing and allowing any of the illicit activity covered.

“Anything that was unlawful yesterday, is unlawful today, and it remains unlawful tomorrow,” she said. “For these low-level, nonviolent offenses, New Yorkers simply do not belong in jail.”

Ms. Mark-Viverito said that the Council would commit additional funds to the Office of Administrative Trials and Hearings to allow it to brace for the influx of cases previously remanded to the criminal court system. The speaker also suggested that the city should offer amnesty for New Yorkers who have an active warrant out for their arrest for a low-level crime—which she argued constitute the majority of the 1.5 million outstanding warrants in the city. 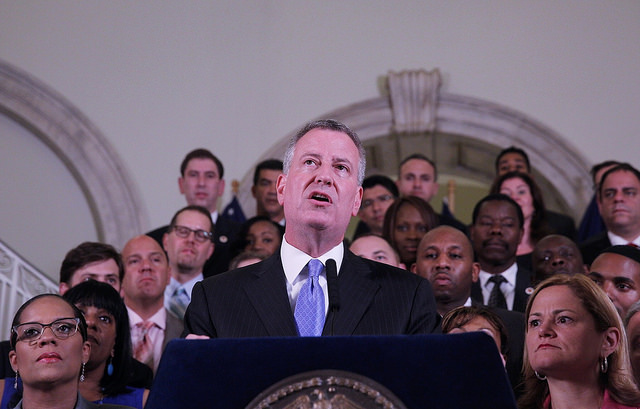