ALBANY—Mayor Bill de Blasio came to Albany to talk about lots of things: funding for helping the homeless, extending mayoral control, making sure proposed cuts to Medicaid and city university budgets don’t “cost the city a penny,” as he and Gov. Andrew Cuomo put it.

Instead, he spent a whole lot of time talking about property taxes.

To be more specific, a property tax cap for New York City—like the 2 percent cap to which the rest of the state is subject. Meanwhile, during the mayor’s testimony, the Republican controlled Senate voted to pass legislation from Staten Island State Senator Andrew Lanza to enact a cap in the city.

“I hadn’t heard as much of it previously,” Mr. de Blasio said of the property tax cap push. “There are partisan differences, there are regional differences. I still think it was respectful. It was a pretty informed and fair hearing. I told them exactly what I thought about why the situation in New York City made clear to me that was not a good idea and not a productive idea for our future.”

But it wasn’t just a regional or ideological divide. The push for a tax cap seemed to come from two fronts: upstate lawmakers who were wondering why Mr. de Blasio didn’t have to scrimp and save to stay under the property tax cap the way their towns do, and downstate politicians from parts of the city where homeowners say they are fed up with increasing property tax bills. Each group included Republicans and Democrats.

State Senator Tony Avella, a member of the breakaway Independent Democratic Conference representing Queens, sought to tie the property tax cap to the restoration of $209 million in Medicaid payments that the governor proposed cutting in his budget. (While it at first seemed that cost would be shifted to the city, Mr. Cuomo later promised they’d not cost the city.)

“I and the IDC, the Independent Democratic Conference, will make this recommendation to you and the governor: that if you would institute the property tax cap, including on assessments in New York City, then we would urge the governor and the Legislature to restore the Medicaid cuts,” Mr. Avella proposed. “Your thoughts?”

“With real respect, senator, I think that would be a very dangerous path for New York City,” Mr. de Blasio responded.

Nonetheless, property tax bills have certainly been going up in the five boroughs: the city’s tax levy increased by 5.7 percent in 2014 and 6 percent in 2015, according to the mayor’s office. Mr. Lanza’s bill would cap the amount by which that tax levy could increase to either 2 percent or the Consumer Price Index, whichever is less. That’s similar to the statewide tax cap.

Mr. Lanza told the mayor that homeowners share the worries of renters in New York City: that they can’t afford to live here anymore, in part due to their property taxes.

The Senate GOP says the property tax cap bill would save New York taxpayers $4.5 billion by 2019. But Mr. de Blasio’s administration says a cap would cost the city dearly. A cap just like the statewide one would cost about $1 billion a year in lost city revenue. Mr. Lanza’s bill, meanwhile, would cost the city a whopping $3 billion in lost revenue, they said. That is because it does not factor in debt service on school bonds, which accounts for $1.7 billion and may be an oversight in the bill language.

While the bill passed the Senate, which is keen on both cutting taxes and supporting the real estate industry that has previously supported such a cap, it is unlikely to win favor in the Democratic and New York City dominated Assembly.

The call for a cap seemed to have a different rationale when it came from upstate lawmakers like Republican Senator Kathleen Marchione, chair of the Local Government Committee. She argued that if the towns she represents have to keep their budgets tight to meet the tax cap, then so should New York City.

“The size of the magnitude of what you have is different, but the problem is pretty much the same,” she said, compared to smaller cities and towns, “and they’re living under a 2 percent tax cap.”

Mr. de Blasio strived to point out many things were different. As lawmakers questioned, in addition to the property tax cap, whether the city should take on more spending from the state considering its budget surpluses, he noted the city has an income tax, unlike other jurisdictions, and already contributes much more to the state in tax revenue than it gets back in services or funding.

Michael Dardia, co-director of research at the Citizens Budget Commission, said the CBC is sympathetic to restraining spending—but the tax cap was a blunt tool.

But he pointed out that the cap isn’t exactly a one-size-fits-all if it is tied, like Mr. Avella suggested, to Medicaid funding—no other municipality is being asked to make that trade.

“The penalty that every other city to whom the property tax cap applies, the penalty is merely that their residents don’t get rebate checks,” he said. “They’re not subject to losing their Medicaid spending cap.”

Kathryn Wylde, President & CEO of the pro-business group the Partnership for New York City, said the property tax system is so “completely dysfunctional” that the cap wouldn’t fix it.

She said Mr. Cuomo enacted the tax cap after his election in response to real estate taxes in Long Island and Westchester being among the highest in the country. That is not true in New York City.

“Our residential property taxes are very low as opposed to commercial, including rental buildings and business and utilities, where the property taxes are extraordinarily high,” Ms. Wylde said. “So there’s an imbalance. Putting in a 2 percent cap doesn’t do anything about the basic imbalance.”

The city’s property tax structure is byzantine, to say the least. One, two and three family homes—the main subject of today’s discussion, dubbed class one properties—are taxed differently than other property classes, including large rental buildings, utilities, condos and co-ops, and commercial property, all of which bear a significantly higher tax burden than the class one properties. There is actually already a cap on how much assessments can increase per year and over five years, meant to smooth out increases but which sometimes leads to residual increases even after property values seem to stop rising: six percent a year for class one properties, or 20 percent over five years. The cap is higher for condos and co-ops.

The Real Estate Board of New York has supported previous efforts by the Senate GOP—which benefits from real estate industry campaign donations—to extend the state’s cap to New York City.

“The City’s property tax system is seriously flawed. An improved system would be more transparent and promote the creation and maintenance of rental housing,” REBNY President – John H. Banks said in a statement. 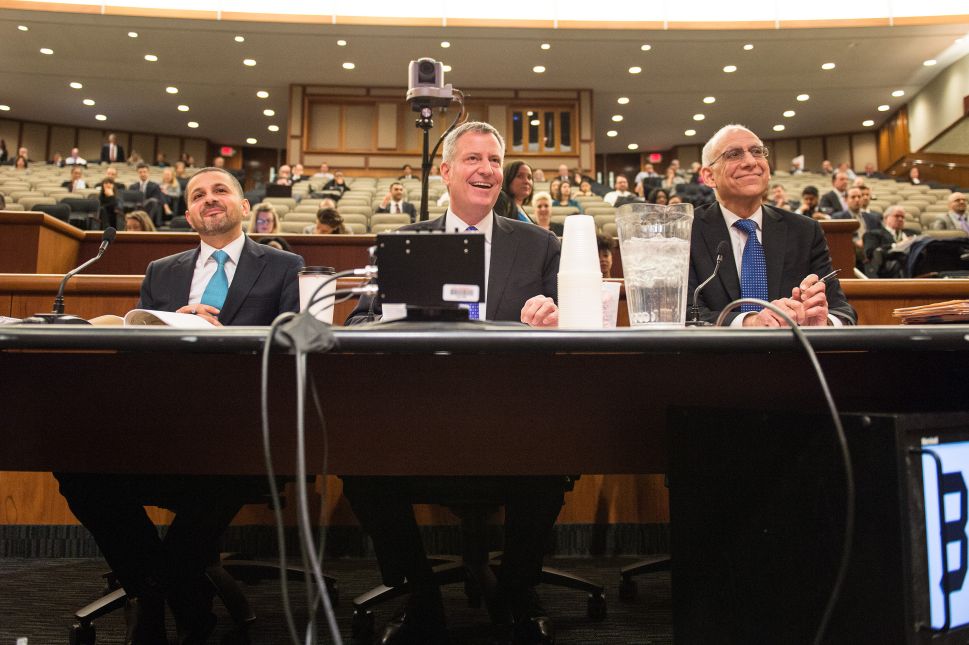