Degrassi’s Twitter account claims that “If you’re a teen, this is your life.” For your sake, I sincerely hope that isn’t the case. Otherwise, you’re a minor and have been addicted to enough drugs to fill a pharmacy, developed a life-threatening disease, changed your sexuality ten times, and cried enough tears to fill a large iced coffee cup from The Dot.

For those of you who were doing better things than watching TV in your tween years, Degrassi is a soapy show about a fictional Canadian high school named, you guessed it, Degrassi. The program has undergone many variations since its humble beginnings in 1979. Yet, to the chorus of much Internet mourning, it finally ended its fourteen-season run last year. Thankfully, we didn’t have to be Degrassi–less for long. A new ten episode season under a new name, Degrassi: Next Class, appeared on Netflix on January 15th of this year.

Full disclosure, Degrassi is intended for an audience that can currently relate to bursting into tears during an algebra test. Of course, this only makes it an amazing guilty pleasure for people who are trying to pay rent and figure out how to do taxes. Needless to say, I did a happy dance at my desk when I heard that the new season of Degrassi was finally online. I consumed every glorious, overly dramatic episode in 48 hours.

I was most excited to be introduced to this season’s new characters. After all, Degrassi has always been diverse. Yet the casting director and writers for Next Class did a particularly good job this time around. There’s Vijay, the gay gamer who has a huge crush on Tristan. Esme, the Asian new girl with a pill problem and a mysterious family life. Yael, the red-haired nerd who plays video games like a champ. And then there’s my personal favorite, Goldi, a hijab-wearing activist who leads Degrassi’s feminist club and speaks with such eloquence that I constantly found myself snapping at whatever she said. No matter what stereotype you fit into in high school, it’s represented in Degrassi.

Unfortunately, the sheer number of characters ensures that everyone gets disproportionate amounts of screen time. For example, I would have loved to learn more about the character who is dealing with a life-threatening disease. Yet, maddeningly, the writers focus on Frankie and Maya’s boy problems. We get it, they’re feeling things. Can we get back to the girl who is coughing up blood and DYING?

At first, one of my biggest complaints about this season was that every character seemed unbelievably dramatic. Would you really storm out of class because a boy doesn’t like you? Would you actually call someone your boyfriend after one kiss? Then I realized that, when I was sixteen, I definitely would. That’s not just the reality of the Degrassi universe– it’s the reality of being a teenager. And that’s not typically represented on television – who can relate to the ultra-glamorous lives of the Pretty Little Liars or Gossip Girl crew? The fact that Degrassi portrays everyday people is valuable in itself.

The Next Class creators clearly made an effort to focus on millennial’s obsession with phones and social media. Every five minutes a character references their Facerange or Oomfchat. And yes, I checked. Those aren’t real. Seriously, who knows what the kids are doing these days? Next Class’s theme song is even autotuned now. Sure, it sounds horrible, but I’m willing to forgive because what I really love about Degrassi– the ridiculously intense levels of angst and sexual confusion– have stayed the same. If anything, they’ve gotten more intense.

Yep, the emotions of the Degrassi crew have somehow become even more volatile this season. Actions that would be deemed INSANE in any other universe seem completely logical at this school. Maybe it’s a Canadian thing, but when someone tells me that they’re going to cut someone’s breaks, I don’t agree with a “Yes! Great idea!” with the happy eagerness of a lab.

Like any good teen drama, Degrassi is the perfect choice for someone who wants to multitask while watching. Don’t worry about missing a plot point– the dialogue is way too on the nose for anything subtle to slip by: “What’s wrong with you? Changing your hair is a cry for help. Everyone knows that!” “You’ve been really sad.” If you can’t figure out what’s going on here, you might want to revert back to The Teletubbies.

Degrassi has carved out a space in television that represents everyday high schoolers. Sure, the characters might be dealing with more problems in a day than most of us face in a year. But still, Degrassi helps kids feel like they’re not crazy for being filled with so many damn emotions. Season two of Next Class will be worth watching just to see how many more times Miles can possibly say “We’re not a perfect, happy family!” Until then, I’ll be brainstorming new hashtags for episode titles. Of course, I’m not sure if I can top “#ThisCouldBeUsButYouPlayin.” 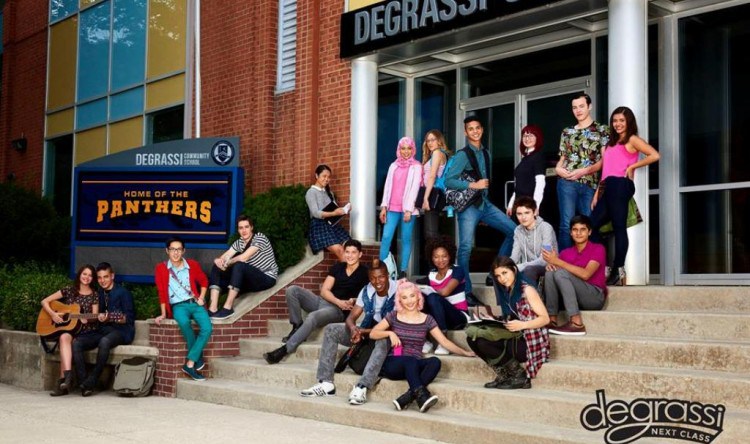