Stephanie Gulley is one of the organizers of CORRUPT.

BLOOMFIELD – A large group of protesters clogged the entrance and vestibule of Bloomfield’s City Hall on Monday despite the bitter weather that marked the season’s coldest temperatures. They gathered to express their distaste with what they perceive as corruption within the town’s government, a movement that was sparked by the November arrest of councilman Elias Chalet for taking $15,000 in bribes.

“This is a way for the people of Bloomfield to speak out against what we perceive as wrong with a loud, unified voice about the questionable decisions made by the administration,” said one of the event organizers, Bloomfield stay-at-home mom Stephanie Gulley. “Basically we demand to be not only heard but we want to be listened to. We aren’t getting any answers about anything that is going on and are typically met with opposition and personal attacks.”

The rally was organized by a group that Gulley created along with her fellow Bloomfield residents Bob and Kathy DeMarino, Russ Zimmerman and Yudi Sobharam. After the bribery charges were waged against first-ward Councilman Chalet, the residents banded together to form CORRUPT (Citizens Organized to Rapidly Remove Underhanded Political Takers). Now, the group has expanded their focus beyond Chalet’s offenses. They say that the “the reason CORRUPT was created is to monitor and make public, questionable actions that have been taken by the Venezia administration.”

Those questionable actions include information the group obtained from two subpoenas issued to Bloomfield officials. They claim that the subpoenas point to corruption beyond Chalet, though no such claims have been confirmed. One of the subpoenas calls for the town’s zoning board and planning board records related to the town government. The other looks for other planning and zoning information related to the town council.

According to Gulley, she decided to cofound corrupt because things in Bloomfield are “getting out of hand.”

Gulley, along with the other CORRUPT organizers, addressed the crowd at the Bloomfield City Hall, calling on Venezia to call for Chalet’s resignation.

“There is no privilege in serving except for the privilege of serving us,” Galley told the crowd. “If you abuse that privilege, it should be taken away from you.”

The rally was held before the evening’s City Council meeting. The rally’s mood continued in the Council Chambers with protesters using the public comment portion to air grievances with Venezia and Chalet who was present.

Zimmerman—a CORRUPT organizer—took to the podium to question the mayor about the subpoenas. David Tucker—a former first-ward councilman—also claimed that Chalet had “lied” during his tenure. One protester questioned Venezia about land purchases that she claimed were valued much lower than the amount that the town paid for the properties. Because it was the public comment portion of the meeting, Venezia did not answer public inquiries staged during that time.

Chalet is currently under investigation by the New Jersey Office of the U.S. Attorney General. 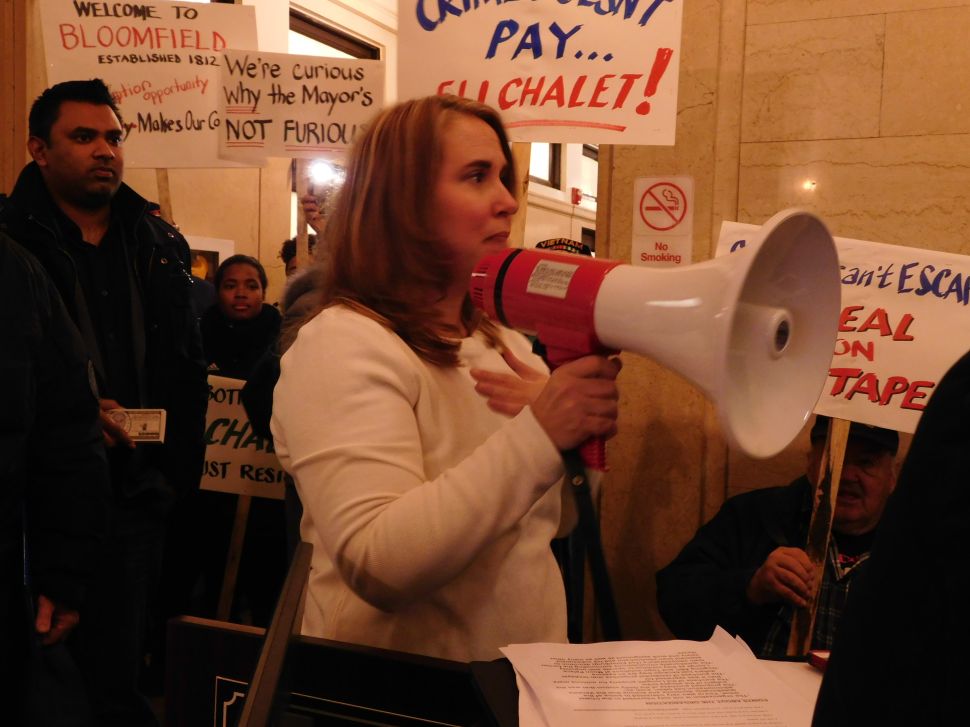