Democrats and Republicans are beginning to agree on one thing: their disdain for Democratic National Committee Chair, Debbie Wasserman Schultz.

On The Kelly File, Fox News anchor Megyn Kelly recently confronted Ms. Wasserman Schultz over allegations that South Carolina Republican Governor Nikki Haley was chosen for the State of the Union response because she’s a woman.

“Why couldn’t she have been picked because she’s smart, she’s savvy, she presents well, she’s articulate and she’s a great spokesman for the Republicans?” Ms. Kelly asked. Ms. Wasserman Schultz dodged the question—resorting to attacks Ms. Haley, alleging she is unpopular in South Carolina because of the damage she has done to the state.

“This woman is a terrible person. I watch her on television. She’s a terrible person,” Donald Trump said in an interview on Sirius XM’s Breitbart News Daily. “And in all fairness, she negotiated a great deal for Hillary [Clinton] because they gave Hillary all softballs… Every ball was a softball. And in fact, the other candidates weren’t even allowed to talk up against her.”

Ms. Wasserman Schultz has assaulted her own party for years.

The “softball” to which Mr. Trump was referring is the obvious bias Ms. Wasserman Schultz has for Ms. Clinton—the former co-chair of Ms. Clinton’s 2008 campaign has been unable to maintain the impartiality during the 2016 Democratic presidential primaries. The debate schedule Ms. Wasserman Schultz established has been criticized by both Sanders and Clinton supporters for the lack of exposure it provides candidates. The second Democratic debate, airing on a Saturday night in November, drew the lowest ratings of any primary debate this campaign cycle—that is, until the third Democratic debate (also on a Saturday night) which had even lower ratings.

Ms. Wasserman Schultz defended the limited number of debates and their schedule as a strategic effort to garner maximum exposure for candidates. In an interview with CNN, she explained, “I did my best to make sure—along with my staff and along with my debate partners—to come up with a schedule that we felt was going to maximize the opportunity for voters to see our candidates.” If doing her “best” means ignoring complaints from DNC vice chairs that there were too few debates (scheduled on nights when they competed with popular football games), then her “best” is not good enough.

Thanks to Ms. Wasserman Schultz’s schedule, the second debate aired at the same time the nationally ranked and undefeated Iowa Hawkeyes played the Minnesota Golden Gophers, and the third debate aired while the Dallas Cowboys faced off against the New York Jets. Great strategy.

Criticism for Ms. Wasserman Schultz was further elevated when she suspended the Sanders campaign’s access to voter databases as punishment for a data breach. After the Sanders camp filed a lawsuit, she rescinded the suspension.

Ms. Wasserman Schultz has assaulted her own party for years. In 2013, Politico reported she planned to accuse President Obama with allegations of sexism and anti-Semitism if he attempted to replace her as DNC chair. According to White House staffers, Mr. Obama has avoided Ms. Wasserman Schultz since she assumed position as DNC chair in 2011. Tim Kaine, the previous DNC Chair, has a monthly lunch with the President.

Pressure is rising from her own party—particularly Mr. Sanders’ supporters—to resign. In the last Democratic debate, as he walked on stage, Mr. Sanders’ tense and insincere greeting with Ms. Wasserman Schultz said everything.

Despite the lack of debate exposure, Mr. Sanders is polling to win the Democratic presidential nomination against Ms. Clinton—whom Ms. Wasserman Schultz expected no one to even run against. In April 2015, she told the Sun-Sentinel, “Secretary Clinton is arguably one of the most qualified people—assuming she announces her candidacy—who have ever run for president. I was proud to support her in 2008. Of course, as DNC chair, I will neutrally manage our primary nomination contest, assuming we have one.” 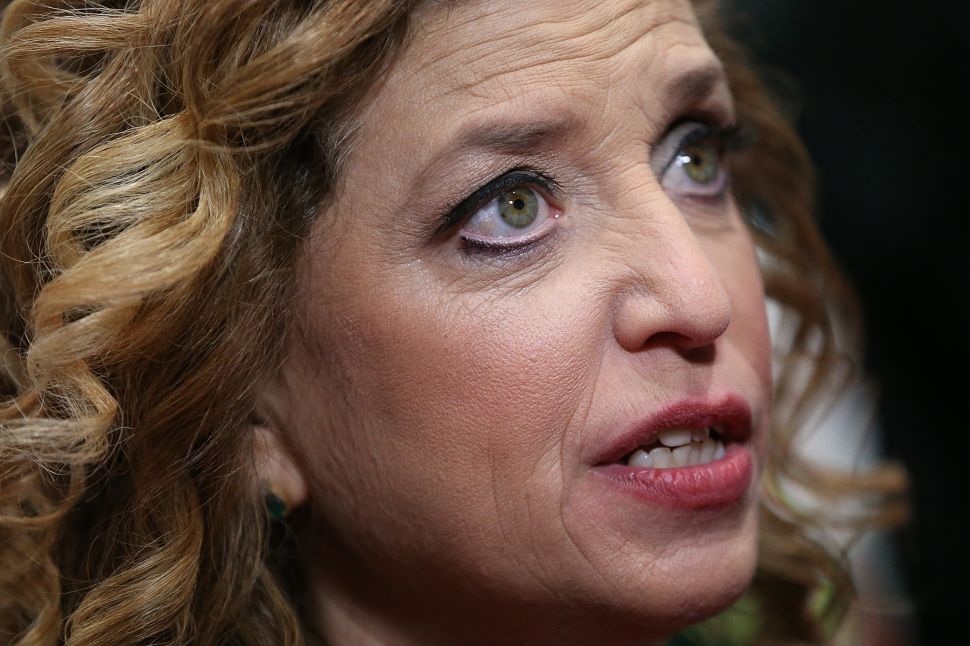