Since the invention of photography, painters have turned their attention toward the decorative surface of painting, rather than contest the faithful and fast reproduction of the camera. Specificity in a painted image became less important, leading them to focus on abstracted shapes and their process of paint application. This concentration became so prominent, that it eventually lead to an endgame of completely non-representational painting as advocated for by mid-20th century American art critic Clement Greenberg.

But imagery stubbornly persisted, and a long line of greats have summoned inventive processes and/or abstractions in order to evoke feelings (think of Francis Bacon’s psychosexual paint splashes or his cage-like diagrams) that one might deem too complex for a photograph to capture.

Today photographic images are constant and innumerable, but many painters still focus on technique and abstraction in order to elicit complicated emotional states.

Such is the case with Katherine Bradford, a 73-year-old painter who has a painting show depicting various “bathers” (swimmers, floaters, surfers, etc.) titled “Fear of Waves” at Canada gallery through February 14. Although many familiar themes have found their way into Ms. Bradford’s paintings over the years (including images of ships, supermen and UFOs), her bathers are notable for many reasons, the first being her medium: acrylic paint.

Acrylic, unlike oil paint, is -soluble. is used to thin the paint, which can be applied in transparent layers or flatter, opaque areas. As you can imagine, it’s ideal for mimicking the effects of , by way of drips, pools, splashes, or simply giving the appearance of reflection or translucency.

Ms. Bradford has spent decades perfecting these exact techniques by both abstracting and rendering waters in all types of light and conditions, and this discipline is on display in artworks like Blue Swimmers, 2015, a near-monochrome ode to and all it’s vexing charms.

It’s a writhing, layered jewel of a painting; as muscular in its structure as it is delicate in its coloration. Blue Swimmers is banal yet operatic, containing a lyric cascade of figures (both active and in repose) that appear to be enjoying an evening in a shallow body of . Its theme is worn; it goes back centuries and applies to practically every culture on earth. French pointillist Georges Seurat’s Bathers at Asnières from 1884, for instance, is an example of a famous predecessor that explores our relationship to bodies of .

So why paint this again? Because it still applies to everybody. We all begin our lives in warm and we all (well, most of us, hopefully) bathe regularly. is restorative. Biologically, we’re all, more or less, walking bags of . Therefore, it’s not surprising that Ms. Bradford’s work is laden with unspoken themes that touch upon birth and life.

It can be scary to ruminate on the fact that we’re living, organic material that ultimately dies, but Ms. Bradford is happy to wallow in the highs of physical experience for us; skillfully capturing a complex and life-affirming feeling with perhaps the only medium that is up to the task. 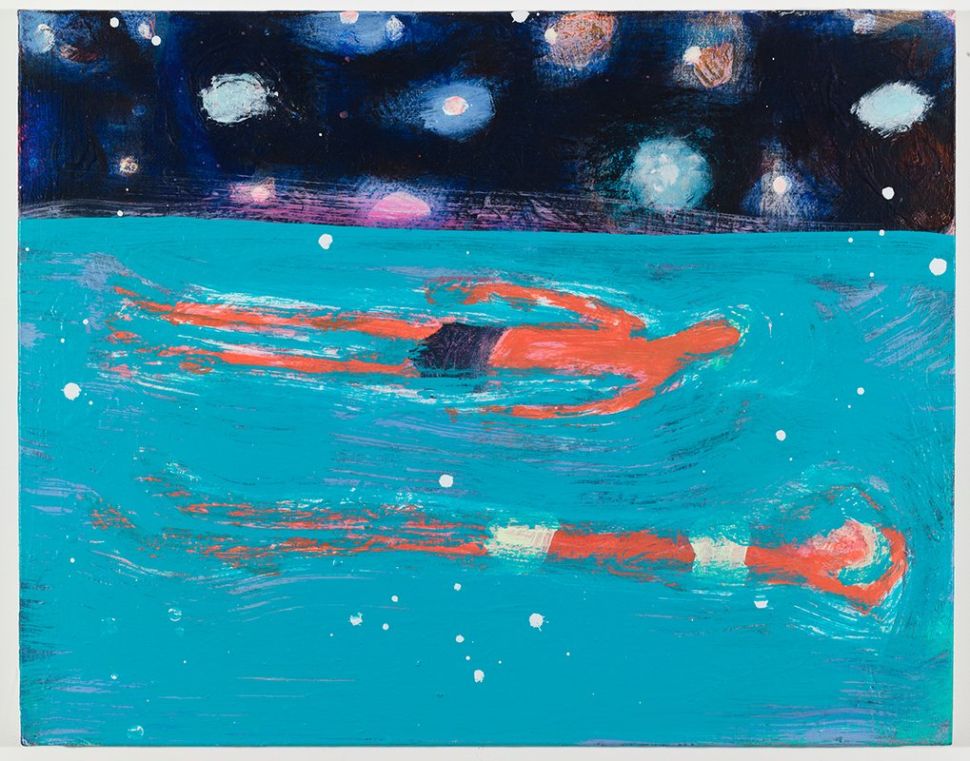