In New York, dating is notoriously difficult, with seemingly endless app options all of which promote quantity over quality. They might promise to make finding love–or at least a hook up–really easy, but there are now apps that make it even easier.

People who struggle with what to say when online dating can now download Dating Hacks, which insists you’ll “never send the wrong message that ruins your chance of getting a date ever again.” Basically, it’s an app with ready-made messages for clueless daters, promising “to start and maintain engaging conversations, get the phone number and setup dates.”  While most hoped that pickup artist negs would disappear when the television show The Pickup Artist was cancelled in 2008, it’s alive on the app, with a section stocked with subtle put-downs.

The app, which launched on January 16, allows users to choose from over 500 messages with 30 categories, including After Date, Sexting, After Sex, What Are We?, Birthday, Not Interested, Stopped Responding, Questions and Romantic. Nothing screams romance the way a pre-made pickup line does, right?

Some inexplicable opening lines include, “I bet you suck at tennis,” and “My parents are so excited, they can’t wait to meet you!” Other are more direct: “You look so cute you make me want to knit matching sweaters for both of us,” and “This app brought us together for a reason and that reason is babies.” Regulars on the app scene will recognize some of the classics, including “Should we tell our future kids that we met on here?” and “So how does this work? Are we married now?”

Dating Hacks works as its own keyboard with Tinder, OkCupid, Hinge, POF, Match, Bumble, Grindr, Coffee Meets Bagel and more, along with text messages. If someone has all of those apps downloaded, or at least half of them, it’s understandable they’re having trouble coming up with original openers for each option.

I tried the Dating Hacks app using Bumble, lauded as feminist-friendly because women must make the first move by messaging a new connection before the match disappears after 24 hours. Bumble, created by a former Tinder founder, has found success because its marketing campaign has attracted an elite crowd, but the thought of putting actual effort into app dating has always overwhelmed me. Who has the time to scroll through multiple profiles and think of something clever to say? No one, which is where Dating Hacks comes in.

I immediately messaged each of my matches with the cheesy pickup lines labeled “openers” and started hearing back before I was done sending them. There were specific options, “I’ve got a little spoon position available for hire, what would you rate your cuddling abilities at on a scale of 1-10?” and strangely suggestive ones, “Does this mean I won’t be a virgin by the end of the week?” Suddenly, responses were pouring in, with each man attempting to one-up my pickup artistry or applauding my creativity. While the canned lines work wonders, there are sites devoted to men responding to any openers, including emo band Dashboard Confessional’s lyrics.

Responses ranged from “Awww. So sweet of you, thanks!” to “Wait, are we in love?” and my personal favorite, “That’s a good intro line. Most girls don’t even try! But I always hear girls complaining about guys saying “Hey,” yet 80 percent of girl’s messages say just that.” While responses kept rolling in, the thought of seriously considering men who thought “Your body is 70% and I’m thirsty,” or “I want you wrapped in my arms like a burrito. Be my baeritto,” were serious dating attempts was slightly creepy.

For some conversations, I continued using the pickup lines, which always received responses, meaning these men were basically talking to a robot. It was an effective way to waste time, actually going on a date with someone I met by a prepackaged pickup line was an uncomfortable reminder of how dating apps are becoming less about real connections and more about drink dates with a different person nightly.

Many people consult a group of friends before sending a message, so why not outsource emotional investment to a professional source? Fear of rejection paralyzes millennials, which is why dating apps are so popular; there’s very little at risk. By purchasing prepared lines, there’s no rejection possible, since they didn’t form the words they’re sending. As ghosting becomes the norm, especially in New York, this app even offers relationship enders.

It’s certainly not romantic, but in a world where meeting by swipe is increasing in popularity and the stigma against online dating continues to disappear, it’s useful for some (especially the socially awkward). Still, the question remains; could you go on a first date with someone, and then continue dating, based on an app crafting messages for you? For those who are unsure about springing for the $1.99 to download the app, know it will give you endless entertainment, even if it will make you question when the future of relationships became so deeply depressing. 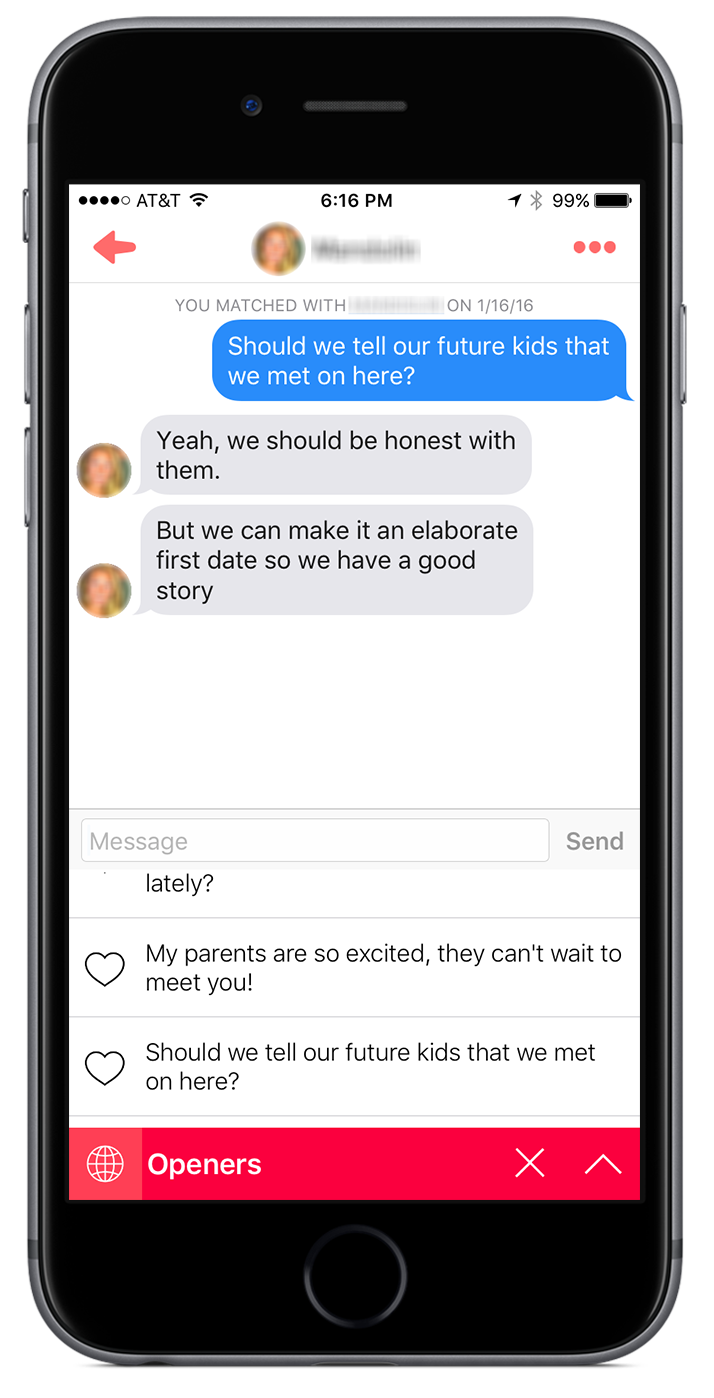