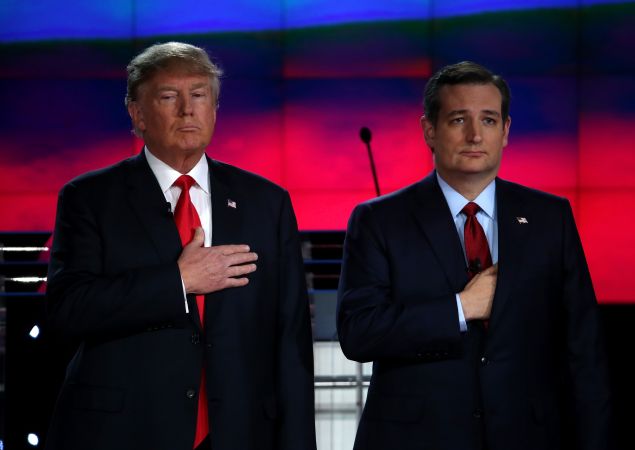 If Donald Trump and Senator Ted Cruz join forces during the primary season, running as a potential ticket with either one taking the position at the top, the civil war that now plagues the Republican Party would almost certainly end as a rout of the GOP establishment and a sweeping victory for the anti-establishment rebellion that would choose the nominee.

The mathematics of the hostile takeover of the GOP by the anti-establishment wing of the party are so obvious that the idea of a Trump-Cruz ticket, or a Cruz-Trump ticket, must have occurred to both candidates. Messrs. Trump and Cruz, possibly joined by Dr. Ben Carson, have almost certainly discussed this possibility privately.

Behind the scenes throughout official Washington the prospect of the nomination debacle facing the GOP establishment is generating intense and panicked discussions across the upper strata of the national Republican leadership that can fairly be described as a behind-the-scenes frenzy.

The imminent threat to the GOP establishment is dramatically understated in a political media that is thoroughly uninterested in reporting about the power mechanics of politics.

The magnitude of the imminent threat to the GOP establishment and the intensity of discussion among its leaders is dramatically understated in a political media that is thoroughly dominated by the hourly attacks by Mr. Trump and the reality television politics he embodies, and is thoroughly uninterested in reporting about the power mechanics of politics that will ultimately determine the nominees of the parties.

There are two mathematical dynamics that reveal the probable rout of the Republican establishment in the 2016 campaign. Consider this:

First, take a careful look at the summary of polling on Real Clear Politics about the battle for the Republican nomination. As I write these words on Tuesday morning the summary results of public opinion for the nomination contest are: Mr. Trump 35 percent and Mr. Cruz 19.5 percent. The figures total almost 55 percent of the GOP electorate. Add to this total the 8.8 percent that favors Ben Carson, who is also part of the anti-establishment rebellion, and the total percent of GOP voters who hunger to overthrow the Republican establishment and choose an anti-establishment nominee approaches 64 percent of the GOP electorate.

The fatal mistake of the Republican establishment in the 2016 campaign is its failure to unify behind one of the center right candidates, creating a mathematical equation that guarantees its demise at the convention.

The candidates who populate the establishment lane on the 2016 GOP campaign highway are Sen. Marco Rubio of Florida, Gov. Chris Christie of New Jersey, Gov. John Kasich of Ohio, and former Florida governor Jeb Bush, the scion of the ultimate establishment family running in a year when a majority of GOP voters want to throw the GOP establishment to the wolves.

The probably fatal mistake of the Republican establishment in the 2016 campaign is its failure to unify behind one of the center right candidates, creating a mathematical equation that virtually guarantees its demise at the convention.

Returning for a moment to the Real Clear Politics summary of polling, as of Tuesday morning Mr. Rubio is favored by 11.5 percent, Mr. Christie by 4.8 percent, Mr. Kasich by 1.8 percent, and Mr. Bush by 4.3 percent. This brings the number of GOP voters who favor the candidates the GOP establishment prefers to less than 25 percent of the GOP electorate, which is not even competitive with the nearly 64 percent who support the anti-establishment favorites!

As the early voting approaches in the Iowa caucus and New Hampshire primaries the numbers may be slightly different but the pattern remains virtually the same. Messrs. Trump and Cruz maintain still-dominant leads in both states while Messrs. Rubio, Christie, Kasich and Bush are lumped together dividing up the traditional center-right vote at levels far below the anti-establishment frontrunners.

As the days of reckoning approach in Iowa and New Hampshire there are two things to watch very closely. First, does one of the center right establishment candidates begin to catch fire to rise above the others in that lane and make a serious run at Mr. Trump and Mr. Cruz? The most likely candidates to make such a bid are Mr. Rubio or Mr. Christie. If either of them, or Mr. Kasich or Mr. Bush emerges as the unequivocal leader of the center right establishment wing, that candidate will become a powerful contender in a three way race against Messrs. Trump and Cruz.

The problem for the GOP establishment is that there is still no sign that one of the center right candidates is emerging above the others to be the clear leader of the establishment wing of the party. If these candidates continue to be lumped together well behind the frontrunners they will effectively cancel each other out and the news emerging after Iowa and New Hampshire will be Mr. Trump and Mr. Cruz dominating the field at the top.

The second thing to watch as Iowa and New Hampshire approach, then, is whether the GOP establishment coalesces behind one of its favored candidates and provides a string of high profile endorsements in January that rocket that candidate to the top tier of the race.

This is possible, but unlikely. The most likely mistake the GOP establishment will continue to make is to play the game too cautiously, and wait too long, and will make its move too late in the nominating process to stop the freight train of the anti-establishment surge.

As you read these words the GOP establishment is in a state of behind-the-scenes panic because most Republican leaders privately agree with the scenario I suggest here, and privately fear it could lead to a landslide victory for Hillary Clinton that could return Democrats to control of Congress, but do not have the vision or balls to take the actions that could prevent the worst nightmares of the GOP establishment from coming true in November 2016.

Watch the maneuverings of Mr. Trump and Mr. Cruz for any signs they will band together to form a ticket during the primary season, with either one of them at the top. If they do it could well be Armageddon for the GOP establishment in 2016, and if they do not formally band together they may still end up standing together on the platform of the Republican convention with their arms raised together in triumph to celebrate the takeover of the party by a triumphant anti-establishment rebellion. 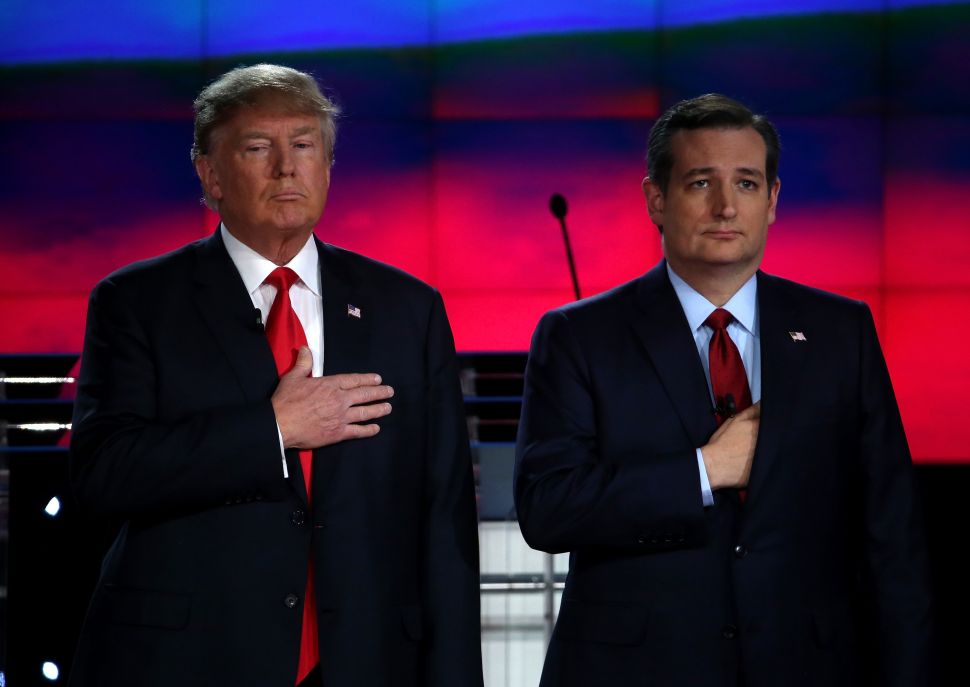