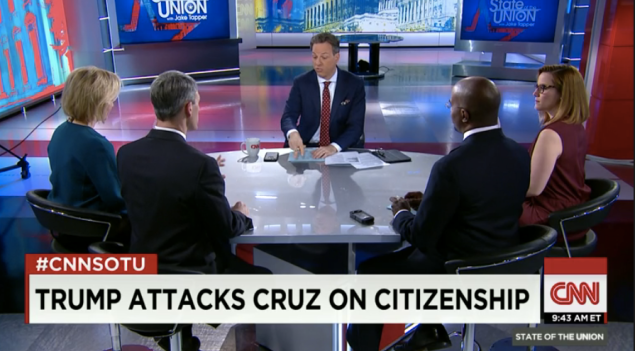 So now New York businessman Donald Trump is playing the “birther” card hard on Ted Cruz, the right-wing Texas senator who might beat Mr. Trump in the Iowa caucuses for the Republican Presidential nomination. Years ago, Mr. Trump tried and failed to prove President Obama was born outside the United States.

That paranoid and racist fabrication is now a non-issue with Mr. Trump, who is leading most Republican presidential polls. What concerns Mr. Trump is that his dear, dear friend Mr. Cruz was born not in the United States but in Canada of a Cuban father and, allegedly, of an American mother.

In that the Constitution allows only “natural-born citizens” to be elected President, won’t those dirty Democrats use Mr. Cruz’s Calgary, Alberta, birthplace against him?

“People are worried that if he wasn’t born in this country, which he wasn’t, he was born in Canada,” Mr. Trump said Saturday in a speech shown in part by Jake Tapper on Sunday morning on State of the Union on CNN. You could sense the deep concern beneath Mr. Trump’s yellow hair and orange face.

“Now, if he ever got the nomination, you know the Democrats are going to bring a major suit,” Mr. Trump continued in defense of his dear friend, the gentleman from the Great State of Texas (or wherever he’s from). “Whether we like it or don’t like it, he lived (in Canada). He was there. He was born in Canada… Because they’re saying he was born in Canada, he’s not allowed to run for President.”

…Canadians (some speaking French!), their breath stinking of maple syrup, most wearing toques on their heads and carrying hockey sticks in their thickly gloved hands and bragging, in their modest and deferential way, about their socialist health care.

Mr. Cruz was not amused when Mr. Tapper asked about this on Mr. Cruz’s campaign bus on the highways of Iowa.

“The Constitution and federal law are clear that the child of a U.S. citizen born abroad is a natural-born citizen,” Mr. Cruz claimed. “The law is simple and straightforward.”

In interest of full disclosure, it must be said that Mr. Cruz released his mother’s birth certificate which showed her born in the U.S. (If this document isn’t a fake, perhaps she really was). But, curiously, Mr. Cruz failed to release either his birth certificate or his father’s.

Perhaps that’s because they both are confessed foreign-born outsiders who—as Mr. Trump has warned us regarding Mexico—might bring drugs and rape and other crimes over the border from the true north strong and free. (Hurry! Let’s build some walls around Niagara Falls! And make Ontario pay for it! In American dollars!)

No, seriously, imagine a power-mad Manchurian Candidate like President Ted Cruz not only opening that oil pipeline from Canada but also turning up the flow on our northern border of Canadians (some speaking French!), their breath stinking of maple syrup, most of them hosers wearing toques on their heads and carrying hockey sticks in their thickly gloved hands and bragging, in their modest and deferential way, about their socialist health care.

‘No one is a bigger birther than Donald Trump. It puts Ted Cruz in a very awkward position, as someone who once peddled that kind of hysteria.’

Those people celebrate “Boxing Day,” for goodness sake, whatever that is, which is probably a good reason to carpet bomb them to see if snow and ice will glisten after the kind of attack Mr. Cruz promises the Middle East as soon as he seizes American military might.

Over on ABC’s This Week, Democrat Donna Brazile chuckled about it. “No one is a bigger birther than Donald Trump,” she said. “It puts Ted Cruz in a very awkward position, as someone who once peddled that kind of hysteria.”

Also on that panel was Tavis Smiley who added, “I’m tickled by it. Trump is an unrepentant, irascible, religious and racial arsonist.”

It is too late to stop either Mr. Trump or Mr. Cruz from winning their party’s nomination, Republican Alex Castellanos told host Chuck Todd on Meet the Press on NBC.

“The moment to go after either has passed,” he said. “It’s too late. Two-thirds of the party is in one of those guy’s pocket. One-third is in the establishment lane. That doesn’t auger well for the establishment going forward after New Hampshire.”

DOUBLE STANDARD: Despite its many journalistic sins, you’ve got to give Fox News Channel due credit for being fair and balanced from time to time. One such example came Sunday on Media Buzz with Howard Kurtz, who showed a Fox clip of the Red Eye show in which two half-wits in the middle of the night were ridiculing President Obama for shedding tears when discussing the gun massacre of 20 school children three years ago in Connecticut.

“But I watched that live,” Mr. Kurtz said. “And it looked like a sincere moment.”

Indeed it did. What Mr. Kurtz didn’t show, however, was a clip from Sean Hannity’s show on Fox Thursday night in prime time. After showing a clip of Mr. Obama’s tears, Mr. Hannity called him “President Crybaby” and added “I thought those were crocodile tears.”

So let’s give Mr. Kurtz the benefit of the doubt. Perhaps he didn’t see Mr. Hannity’s cheap shot. Or perhaps Mr. Kurtz’s standards are so high that he will not let a louse like Mr. Hannity be shown, even on tape, during Media Buzz.

HILLARY CLINTON ON GUNS and BILL: On Face the Nation on CBS, John Dickerson had an exclusive interview with Hillary Clinton, the Democratic front-runner, who spoke about guns. “It’s the only industry in our country where we have given that kind of carte blanche to do whatever you want to with no fear of legal consequences,” Ms. Clinton said. Responding to a Trump ad showing her husband 20 years ago with Monica Lewinsky, Ms. Clinton said: “He wants to engage in personal attacks from the past.”

GEORGE WILL’S TAKE: If Ms. Clinton becomes president and her former president husband shares the White House with her, it will give George Will of Fox News Sunday’s panel a chance to exercise his high-falutin’ vocabulary and word-smithy-ness. He said Sunday “It would reinforce the perception about the Clintons that whenever they come, they come trailing clouds of seamy-ness of some sort.” When the rest of Fox’s kangaroo court began to pile on President Obama for his “unconstitutional” executive orders, token liberal Juan Williams was allowed to speak.

“You guys are missing total context here,” Mr. Williams said. “Congress is doing nothing. Zero. Congress obstructs this president. They try to disagree and to somehow put down this president at every turn.” Suddenly, his 15 seconds were up and Laura Ingraham interrupted him with mocking laughter

A BREATH OF FRESH AIR: Sometimes, to escape the silliness, it’s good to turn on Fareed Zakaria GPS on CNN. In Sunday’s commentary, Mr. Zakaria said the tipping point for the ongoing chaos in the Middle East—the one that “upended the balance of power”—was the 2003 invasion of Iraq by President George W. Bush. Mr. Zakaria said it in the context of how Shiite Iran and Sunni Saudi Arabia are beginning to menace each other as the region’s woes mount.

“Washington’s principal ally in the fight against ISIS is the Shite-dominated government in Baghdad (Iraq),” he said. “And, besides, the single greatest threat to America emanating from the Middle East remains radical Sunni Jihadists, many of whom have drawn inspiration, funding and doctrines from Saudi Arabia. There are very few good guys in this story.”

Former Russian chess champion Gary Kasparov joined Mr. Zakaria to discuss Russian aggression in recent years under President Vladimir Putin in Ukraine and Syria. “It’s all like cult of death,” he said. “It’s all prisons. It’s all war with no endings. No. We have to fight everybody… I’m fairly pessimistic.”

CORRECTION: In Friday’s column about poison water in Flint, Michigan, credit for reporting should have gone to the journalist Curt Guyette (not “Kurt.”) 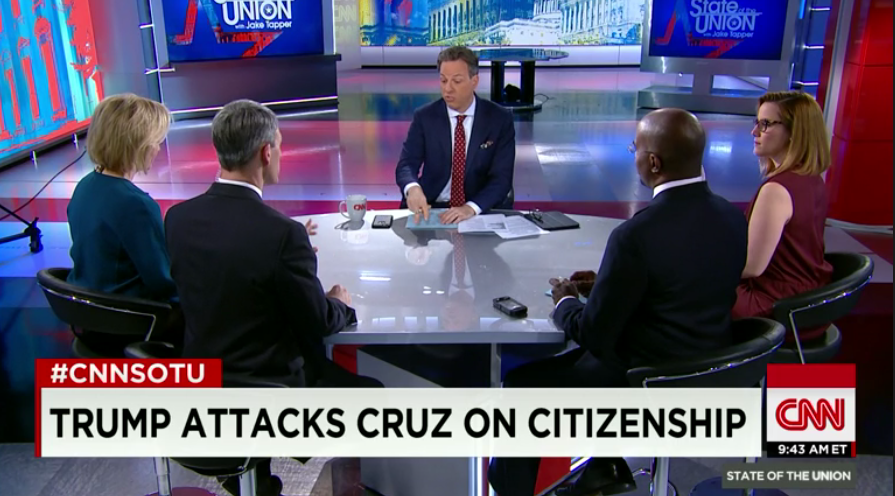