For most of Sunday morning, the talk shows perked along with the usual navel-gazing and talking-head conversations that come after two holiday weeks and ten months before the final voting.

How would Republicans react to President Obama’s new vow to close by executive order the gun-show loophole that allows dangerous people to buy dangerous guns without a background check?

“I don’t like it,” Republican presidential candidate Donald Trump told host John Dickerson on Face the Nation on CBS. “I don’t like anything to do with challenging our Second Amendment.”

On the campaign trail, the big issue was Monday’s expected appearance of former President Bill Clinton in New Hampshire to help his wife, Hillary, in her bid for the Democratic nomination this summer.

Mr. Trump has threatened to force Mr. Clinton’s long-ago sexual behavior into the conversation. Will that help or hurt the Clintons?

“If Donald Trump wants to go into the sewer and play this game, do it!” Democratic analyst Donna Brazile said on CNN’s State of the Union. “Because that’s what Donald Trump enjoys doing.”

In a way, the occupation of the building by what looked like angry white men underscored the prevailing theme of several Sunday shows.

It came during Brian Stelter’s Reliable Sources, which airs at 11 a.m. in the East on CNN. The network reported that an armed militia had taken over a federally owned building at the Malheur National Wildlife Refuge in Oregon.

They were supporting a father and son who are to be imprisoned Monday in a land dispute with the federal government.

The screen showed fire and flags, including a yellow one with a snake on it. Most interestingly, CNN reported, at least one of the men in the group was a son of Cliven Bundy, the Nevada rancher who challenged the federal government in an armed land dispute two years ago.

Indeed, it will be interesting to see which media outlets choose to show up and exploit it. Mr. Stelter recalled that the elder Bundy “was treated very sympathetically by news outlets like Fox News. We’ll see if that happens again in this case.”

Certainly Fox News—especially Sean Hannity—portrayed the elder Mr. Bundy as some sort of heroic Western archetype. This story line ended shortly after Mr. Bundy’s discourse about how African-Americans were better off when they were slaves. Even the race-baiting Mr. Hannity ran from the story.

How, also, will presidential candidates posture? Will the anti-Washington zealot Ted Cruz, the Republican Senator from Texas, put on his cowboy hat, boots and checked shirt and tote his shootin’ iron over there to push through the TV cameras his anti-government demagoguery?

Or will establishment candidates like Florida Senator Marco Rubio call for law-and-order, even while hedging his bet and claiming that the bureaucrats often over reach. Will Ms. Clinton support the federal government, her most recent employer?

‘America has had its heart broken and it’s scared to death because nothing works… What do scared people do? They do scary things… the peasants are revolting.’

And will Mr. Trump add more of the virulent rhetoric that has lifted him to first place in most G.O.P. polls? Some folks echo him.

“Basically, we want the government to abide by the constitution,” Ammon Bundy, Cliven’s son, told CNN, “so people can live without being terrorized.”

In a way, the occupation of the building by what looked like angry white men underscored the prevailing theme of several Sunday shows: That white Americans of the middle and working class are angry. Because of this, Mr. Trump on the right wing and Senator Bernie Sanders of Vermont on the left are getting enormous backing in polls.

Attempting to explain it was Richard Dorment, senior editor of Esquire, a magazine exploring the anger in its next issue.

He told NBC’s Chuck Todd on Meet the Press that Mr. Trump was an “avatar of anger” who is speaking for a large segment of disgruntled citizens.

“Life didn’t turn out for them the way they thought it would be,” Mr. Dorment said of the disillusioned and anxious white citizens. “This is the anger of perceived diminishment.”

Chris Matthews—often more effective as a guest than a host—joined in to say “The working man and the working woman say ‘We’re getting screwed and no one’s respecting our American citizenship.’”

Speaking of immigration, CBS host Mr. Dickerson chuckled when Mr. Trump told him he would make Mexico pay for a wall to be built on the southern U.S. border to keep out Mexicans.

“Nobody thinks you’re going to get Mexico to pay for the wall,” Mr. Dickerson told Mr. Trump.

The discussion moved to Ms. Clinton.

“She is pandering to women,” Mr. Trump said. “She’s caused tremendous death with incompetent decisions (as a Senator and a Secretary of State). She’s a terrible person. Women are telling me that women don’t like Hillary Clinton.”

Shortly afterward, on a CBS panel, Ruth Marcus of The Washington Post said Mr. Trump is “appalling in terms of his lack of substance, his lack of deep thinking, his failure to answer real serious questions. I find myself thunderstruck.”

EAT YOUR PEAS: Democrat Van Jones, on ABC’s This Week, regarding Republican presidential candidate Ben Carson, who has shuffled his staff as he plummets in the polls: “The one person he needs to fire on his campaign is Ben Carson. When you can’t tell the difference between hummus and Hamas, you’re not going to survive.”

COP QUESTIONS: Mr. Jones, again, this time on no indictments for police in Cleveland in the shooting death of Tamir Rice: “You have the prosecutor acting like a defense attorney. You had a prosecutor spending money to bring in experts essentially to exonerate the police officers. That is highly unusual… If you are a young person of color in America, you are guilty until proven innocent.”

GET YOUR TORCHES and PITCHFORKS, FOLKS: On ABC, Alex Castellanos summarized the nation’s woe. “This country is afraid,” he said. “This is the ‘Let them eat cake’ election. America has had its heart broken and it’s scared to death because nothing works… What do scared people do? They do scary things… the peasants are revolting.”

HE OBJECTS: New Jersey governor Chris Christie, a Republican candidate, speaking with Chris Wallace on Fox News Sunday about The New York Times. “I hardly think they’re an objective source,” Jumbo said. Mr. Christie also called President Obama “a petulant child” who “wants to act as if he’s a king” on the issue of gun safety.

YA THINK? After outspending most Republican presidential candidates for TV commercials so far, former Governor Jeb Bush of Florida told Fox News Sunday: “Advertising in this world doesn’t work to the same extent it probably did in the past and so we’re making adjustments.” (Too bad his father’s smear specialist, Lee Atwater, is no longer with us. He gave us the Willie Horton campaign. He could make Mr. Bush some memorable ads).

THIRD PARTY? Kirsten Powers of Fox News, predicting the near future: “Sanity will take hold in the Republican Party and Trump will not get the nomination. And he will run as a third-party candidate, claiming he’s been mistreated by the Republican Party.”

FIRST LADDIE: Former President Bill Clinton on NBC video: “I am tired of the stranglehold that women have had on the job of presidential spouse.”

ONWARD CHRISTIAN SOLDIERS? On State of the Union, CNN played part of a conference phone call with Ted Cruz pep-talking his supporters. “Get ready,” Mr. Cruz said. “Strap on the full armor of God. Get ready for the attacks that are coming, come the month of January. You ain’t seen nothin’ yet!

DON’T MISS IT: Anderson Cooper of CNN will host a town-hall meeting with President Obama and a focus group on the subject of gun safety. It’s on Thursday at 8 p.m. Like him or not, you must admit that Mr. Obama has tried to live his values and keep his campaign promises. 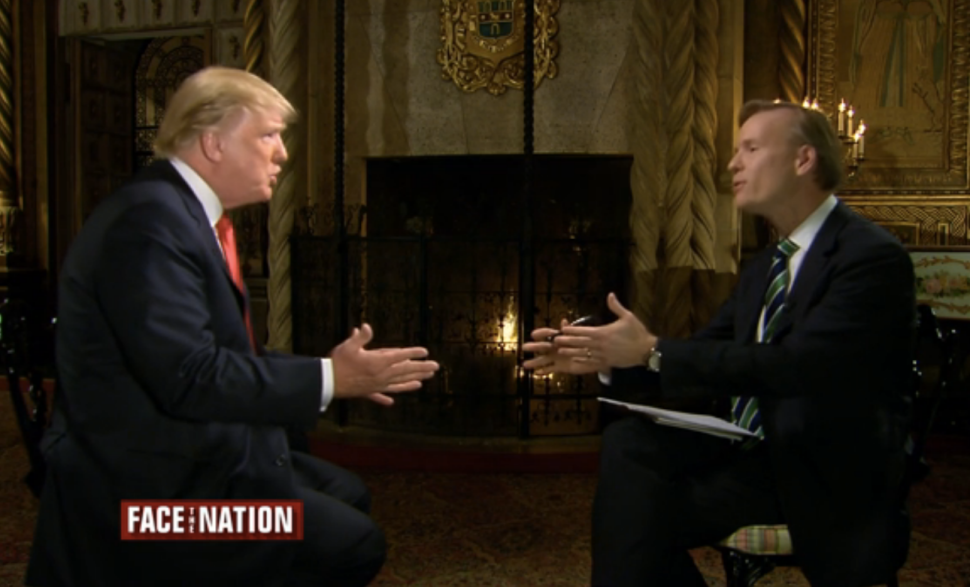