Week 1 is in the book guys and already we have raised nearly $25,000!!! In case you're not aware I've partnered with @coffeembagel to raise money for my foundation @limitlesstomorrow 🔆 By donating at least $10 to @limitlesstomorrow via the link in my bio you are entered for a chance to win a date with me, including flights, hotel, and a dinner in NYC. The contest is open internationally! The more you donate the more chances you have to win! The contest closes on January 27th but the date will happen as our schedules allow 🙂 Using your donations @limitlesstomorrow will be able help fund the dreams of young students everywhere! Don't let an opportunity for an awesome #nyc experience and a chance to help a truly fantastic cause, slip through your fingers! P.S. I'm really excited for our date 😊 #dateforcharity #unlimityourself

Coffee Meets Bagel, a dating app that has encountered some social media mishaps in the past, created the ultimate marketing campaign with their latest promotion. For those searching for eligible bachelors, the app is auctioning off a romantic date with the famously handsome McDreamy lookalike Dr. Mikhail Varshavski, better known on the internet as Doctor Mike. The popular app offers users just one potential match at noon each day, called a “bagel.” The user then has 24 hours to decide whether they’ll “like” or “pass” on the match. Compared to Tinder, there’s less variety in Coffee Meets Bagel, which can result in more meaningful communication.

Thank you to @firstgenerationfashion for the incredible photography! Your concept of highlighting first generation New Yorkers is one I can truly get behind! Keep an eye out as my interview with her will be launching soon! 👌🏼#nyc #fashion #culture #supportawesomeness

Dreamy Dr. Mike describes himself as an “avid explorer of life” on his Instagram, which has over 1.2 million followers. His classic good looks could give former favorite meme “Ridiculously Photogenic Guy” some serious competition, especially since the renowned runner is taken. With bone structure that looks FaceTuned and a schedule taking him around the world, splitting his time between New York and Miami, he is the ultimate dream boyfriend, as long as you’re willing to contend with his many female followers.

Just remember, the difference between a hard day and a productive day is only your outlook 👁 #hospital

The famous doctor is currently a second year resident focusing on family and sports medicine at Overlook Medical Center in Summit, New Jersey, which some Manhattanites would consider to be a long distance relationship. In addition to being ridiculous good looking, the doc is a do-gooder. He launched The Limitless Tomorrow Foundation, a charity that offers financial aid to students, regardless of their GPA.

With the first week already over, the app has raised almost $25,000 for his foundation. Potential daters are required to donate at least $10 to Limitless Tomorrow and join Coffee Meets Bagel to win a dream date, including flights to New York, a 4-star hotel room and dinner at a Michelin Star restaurant, which is far more romantic than casual cocktails. Those who enter are eligible to receive digital thank you cards and videos from the good doctor. The contest is open internationally until January 27, although New Yorkers could up their chances by just booking an appointment with the doctor.

I've partnered with @coffeembagel to raise money for my foundation @limitlesstomorrow by auctioning myself off for an all-expenses paid date. If you're interested in flying to #NYC, staying in a 4 ⭐️ hotel, and dining in a Michelin star restaurant with me (for free!), all you have to do is click the link in my BIO and donate for a chance to win! I'm incredibly excited to see who will be my date on January 27th when the contest closes (actual day of date to be decided)! Let's raise money for an amazing cause and have some fun in the process 🤓🎉 #dateforcharity

Dating in New York is difficult, which makes meet cutes almost extinct. Finding your husband by way of a dating app auction seems like it could be a futuristic romantic comedy plot, especially with a potential husband who’s as handsome as Doctor Mike. After all, The Bachelor has been deemed romantic, so why not an internet date, made possible by donation? 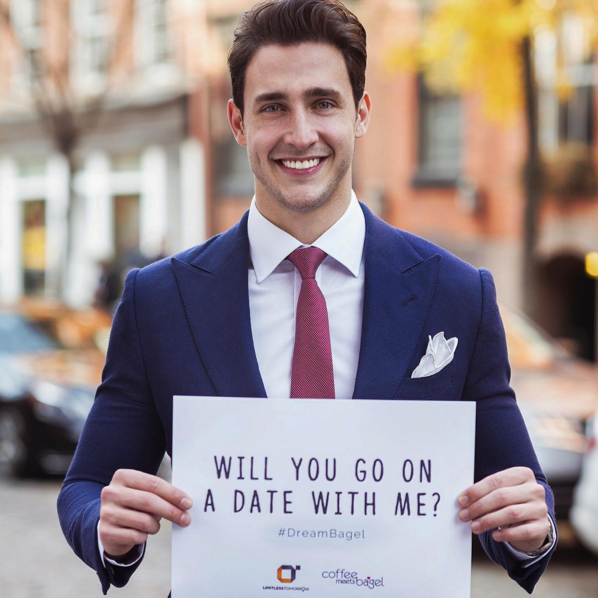