They almost never makes it into the actual reviews, but as God is my witness my notes for every episode of Downton Abbey are full of the wit and wisdom of the Dowager Countess, and this episode alone had at least three exchanges for the ages. There was her back-and-forth with Lord Robert about how despite her handsome racecar-driving suitor, Lady Mary needed more than “a handsome smile and a hand on the gearstick”: “I’m surprised you know what a gearstick is.” “I know more than you think.” There was her dismay with her supposed ringer in the great hospital debate, Lady Prudence Shackleton, for failing to come to her aid during the argument: “How can I present myself as an expert when I don’t know the facts?” “It’s never stopped me!” And there was her riposte to Lady Edith for daring to suggest Isobel Crawley had a right to be heard: “I suppose Cousin Isobel is entitled to put up an argument.” “Of course she is! She’s just not entitled to win it!” With that, Lady Violet began chuckling and cooing to herself, as if simultaneously appreciating her own rapier wit and soothing her frazzled nerves like a purring cat. So if I’m not shining the spotlight on Dame Maggie Smith and Lady Violet, it’s not because she doesn’t deserve it—it’s because she’s been stealing it so deftly herself.

But it’s Thomas Barrow and Lady Mary Crawley who are Downton Abbey’s major creations. As Thomas and Mary, Rob James-Collier and Michelle Dockery have great faces, great voices, and feel taut and unyielding in a way few leads this side of Betty Draper are allowed to be. The Dowager gets most of the laugh lines, but these two challengingly, rewardingly difficult characters get far stronger stuff, and we get more out of them in turn. On last night’s episode, we got plenty.

Of the two, Mary was less central to the action, provided you don’t count boring stuff as “action.” She whisked Anna Bates to London and back for an obstetric procedure the outcome of which couldn’t have been more predictable if they’d flown there on a stork, and she flirted with Matthew Goode’s veddy veddy charming Henry Talbot, the living embodiment of Julian Fellowes’s inexplicable failure to start steering Mary and Tom Branson toward each other two seasons ago. But while the plot was a bust, the character work worked like gangbusters, as usual. Talbot may or may not be an inert maritus ex machina, but he’s almost worth it for the opportunity to watch Dockery portray Lady Mary’s obvious thirst for the dude; her widening eyes and exclamation of “golly!” when he shows up unexpected is her equivalent of the customary Tumblr greeting “fuck me daddy.”

More impressive still was Mary’s handling of the return of Gwen, the chambermaid played by Rose Leslie who departed to become a secretary and/or tell Jon Snow he knows nothing way back in Season One. Now an official at a woman’s college, Gwen had no idea her official business of the day involved the Crawleys until she was at their doorstep, and kept quiet about her old job there rather than make a big thing of it. When Thomas blows up her spot over lunch, Lady Mary is irritated at the pseudo-ruse—until, at the prompting of other members of the family, Gwen recalls how Lady Sybil helped her make the leap from service to secretary and thence to all the other opportunities she’s had. You can watch Lady Mary’s peevishness melt into an ache for the sister she lost right there on her face, so distinctly it’s like a special effect. Later, Mary tells Anna how sorry she is to have been rude to Gwen at first, and how she’s spent the rest of the day thinking about how much better a person her late sister was than she is. Anna denies it, but that’s just it—Sybil was a better person than Mary, and Mary’s aware of it, and Mary regrets it, and Mary’s still Mary. Even when she supports Edith’s decision to hire a woman editor for her magazine, she can’t help but characterize the rightness of the idea in the most insulting way possible: “A monkey will type out the Bible if you leave it long enough.” Forget Betty Draper for a second—Mary can’t overcome her faults any more than Don Draper could.

She’s outdone in this regard by Thomas Barrow, who seems so destined for unhappiness at this point it’s like a living thing that follows him around. Despite being king, or at least butler, for a day during Carson’s honeymoon absence, he focuses primarily on the things making him miserable—his repeated rejection by his would-be friend Andy, his failure to find the job he’ll obviously need once Downton cuts down on staff, the way the rest of the employees bristle at having to take orders from him. Soon enough, he exposes Gwen’s secret out of spite, a spite he freely acknowledges when called out on it by Mr. Bates. “You resent her luck,” Bates tells him. “You’re jealous.” “Jealous?” he replies with a bitterness you can practically smell as smoke in the air. “Why? Because I dedicated my life to service and I’m about to be thrown out on my ear, when she scarpered first chance she got, and now she’s lunching in the dining room? Why would that make me jealous, Mr. Bates?” James-Collier delivers the speech with his customary sneer, one of TV’s best.

Thomas sees everyone else’s happiness as a mockery of his unhappiness, a sign that he can never have what other people do—but as with Lady Mary, his clear picture of his psychological predicament isn’t enough to help him overcome it. When he tells Mrs. Baxter he envies her because she has friends—that’s it, just friends—she says she envies him, because “you don’t care what people say.” “You’re wrong about me,” he tells her before walking away. “I mind what people say.” It’s a haunting moment, yet the very next day he shivs Gwen just for the hell of it. He knows he should do better, but he can’t bring himself to do so, not when the shittier option is always available. “Why am I here,” he wonders. “What am I doing.” The tragedy of Thomas is that even if he knew the answers, they’d likely do him no good. 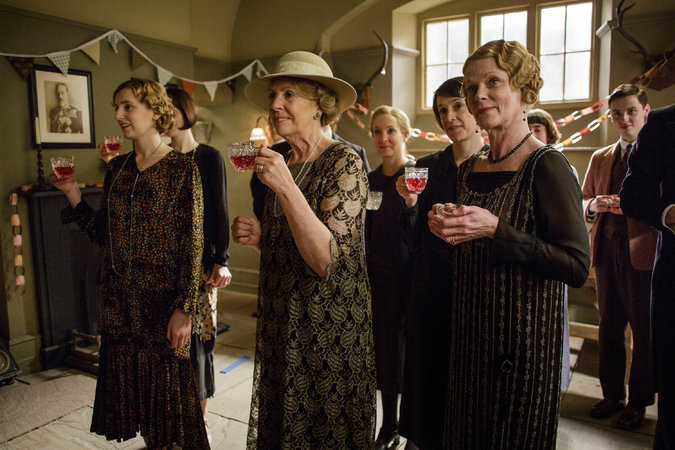