Like the House of Grantham itself, Downton Abbey begins its sixth and final season in a much diminished state. The show’s fall from grace with American critics, who once discussed it as PBS’s entrée into TV’s New Golden Age, has if anything grown more precipitous over the past year; given the series’ rather aimless fifth season, perhaps that fate is at least somewhat deserved. And while comparing one’s take on a television program to the consensus is usually a mug’s game, for a show as status-obsessed as this one it makes some sort of cosmic sense. Just as Lord Robert, Lady Cora, Lady Mary and the gang must come to terms with their uncertain future when they visit a fire-sale auction at the former home of their aristocratic friend Sir John, we’ve got to figure out where it’s all headed. With only ten or so hours to go, is there still a place in the world for the Crawleys and their loyal servants?

The answer is yes, in the real world, anyway—though it’s only if you ignore the answer in the world of the show itself that this becomes apparent. Downton has repeatedly painted its big-picture theme of change coming to the genteel realm of the English upper class with Thomas Kinkade–like factory precision, to the point where you can satirically sum it up in a single tweet with, like, half the character count left over. On a plot level, too, the series has largely exhausted the youthful energies that drove it during its first several seasons, as the three people who best personified them—Jessica Brown-Findlay’s Lady Sybil, Dan Stevens’s Matthew Crawley, and Allen Leech’s Tom Branson—departed the show, taking much of its storytelling mojo with them.

Fortunately for you and me, we’re watching a TV drama, not writing a middle-school book report. Downton’s exceedingly circumspect front-line report from interbellum England’s class warfare has little to offer a commentariat trained to respond to a hardboiled cliché-fest like Jessica Jones as if it’s Marvel’s answer to Steinem and Davis, but ideally we’d made our peace with its lack of firepower in this regard several seasons ago. The lack of the Mary/Matthew and Sybil/Branson romances is a more difficult obstacle to surmount—this is a soap opera, after all—but not an impossible one. If, as it did in tonight’s season premiere, Downton simply continues its sharp observations of human behavior among fundamentally decent people, as animated by some of the loveliest faces, voices, and cinematography on the tube, it still has much to offer.

Take Lady Mary. (Please!) Though she’s spent most of her widowhood spinning her wheels, narratively speaking, she remains sui generis among TV’s leading ladies. Undoubtedly the show’s hero at this point, she’s nevertheless never going to be nice to her sister Edith, never going to be a warm and doting lover to anyone but her late husband, never going to sand down her sharp edges in pretty much any way that matters. It takes guts, frankly, to create a woman character so unapologetic about her obvious faults and demand the audience take her seriously as a worthwhile individual anyway (ask Matthew Weiner and January Jones if you don’t believe me).

Mary’s mini-story in this episode, in which a chambermaid from the hotel where she and her ex Tony Gillingham spent a long weekend fucking as an abortive trial run for a future marriage, is a case in point. Faced with the grotesque decision of acceding to a likely lifetime of blackmail or standing up to it at the cost of her reputation in this grossly sexist and hypocritical society, she opts for the latter, reasoning that if her life is going to be ruined, at least that way she’d be in control of the wreckage. It’s a brave decision, made by a woman taking total and unashamed ownership of her sexual and romantic needs. But writer/creator Julian Fellowes complicates it by keeping Mary’s air of condescension (though nowhere near as severe as she stands accused of it being by her blackmailer) intact, and by noting via Lord Robert that it hardly considers the equally endangered reputations of the other parties involved. As played by Michelle Dockery, who has the unearthly poise and beauty and sonorously posh accent of a Tokien Elf, Mary has a strength that comes at a cost to her likeability, but that’s a trade-off she’s clearly considered and found more than worth the price. I for one agree.

Yet for all the jokes, Downton takes the issue seriously. This is a world in which middle-aged women like Hughes and Patmore can reach that stage of life without a single sexual encounter; why wouldn’t finally finding love in her autumn years fill Mrs. Hughes with as much anxiety as anticipation? It takes courage for her to assert herself and express her fears, taking the leap of faith that they’ll be taken to heart by those to whom she is closest. It’s also a world in which a man like Carson rises and falls with the concepts of duty and obedience, to the point where he’s ready to sack poor Daisy Mason for standing up to the unyielding new landlord set to expel her father-in-law from his family home. For him to express his ardor for Mrs. Hughes not in terms of a man’s natural right to a woman’s body, but as an aspect of the all-encompassing affection he feels for her, body and mind and soul, requires him to speak in an emotional language far removed from his native tongue. And as with the Lady Violet/Prince Kuragin storyline last year, in which the Dowager Countess and her aristocratic Russian paramour spoke with clarity and candor about the intense sexual bond they once shared, Carson’s desire for Hughes, and her relief to find he feels it for her (as she puts it) “warts and all,” is treated as no laughing matter at all. In other words, Downton treats the sexual desires of older people as sexy—which they are! You needn’t picture actor Jim Carter stripping out of his butler uniform to relate to the underlying passions.

But if you are a visually stimulated sort, this episode provided plenty of eye candy, cinematically speaking. The hunt scene that opened the hour was gorgeously edited, constructed from individual shots of dogs, horses, and riders that slowly seeded our main characters into the mix like ingredients in a stew. A wide shot of the riders barreling through the grounds transitioned to a comparatively claustrophobic hand-held shot of Mrs. Patmore on her way to Mrs. Hughes’s room to find out what’s bothering her friend. A scene of Anna Bates moping in the kitchen swept up through the floor to Lord Robert and Carson in the drawing room, an upstairs/downstairs transition the show has never done before to the best of my recollection, proving it still has new visual tricks up its sleeve. Anna and Patmore are both framed diagonally in the servants’ staircase in another memorable image, while Anna and Bates take a silhouetted walk outside against the massive slate-blue evening sky in the episode’s single most beautiful shot. Downton Abbey is full to bursting with this kind of stuff every week. Enjoy it while you can. 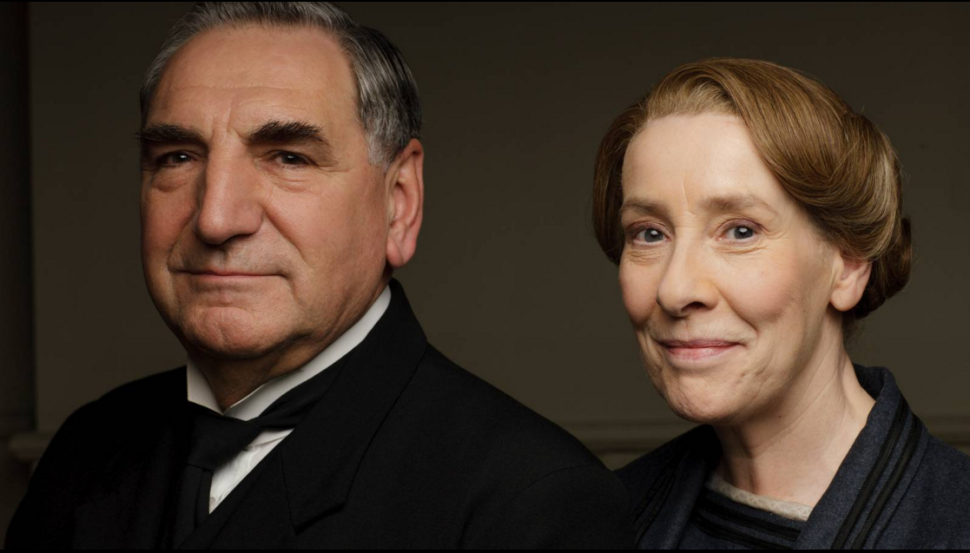