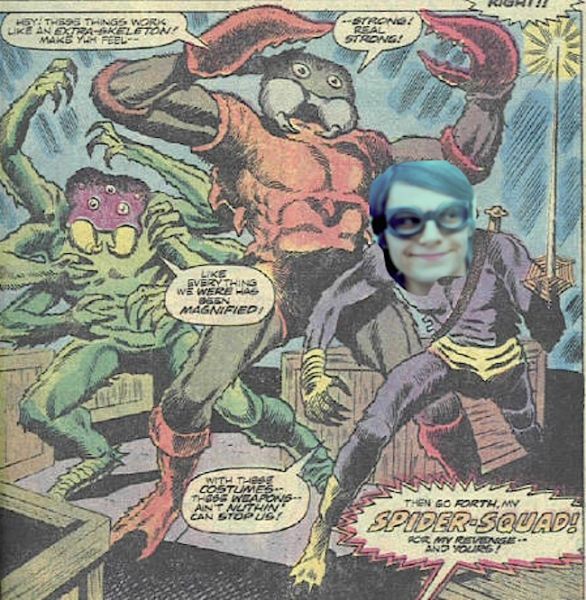 Dreamcaps is a series in which I write recaps for episodes of TV shows that do not exist. That means I make up absolutely everything, except for the show titles, which are made up by YOU- if you have an idea for a show title you’d like to see recapped, tweet @jennyjaffe! This week’s title comes from @brookesaysstuff.

So little is keeping me from making this recap entirely one long “UGHHHHHHHH”. Like most Marvel shows, Spider Squad V still seems to be endlessly skirting around falling into a pit of its own self-satisfaction. Yes, the dialogue is zippy and peppered with topical references. Yes, the characters always seem to be winking juuust enough at the audience to forgive some of the more contrived plot twists. Yes, Evan Peters is completely swoonworthy as detached party boy-turned-cheeky-villain Illuminaughty, and yes that name is clever. Ughhhhhhh, Marvel, we get it, ughhhhhh.

Of course, Spider Squad V is also bogged down by the fact that it’s taken us about 18 episodes just to get through the backstory of the eponymous Spider Squad. Unlike Daredevil or Agents of S.H.I.E.L.D., the Spider Squad never had a beloved film franchise to introduce them to an un-comic-savvy public. Instead, when they were pulled out of Marvel’s Bargain Hero Bin by Netflix, it became readily apparent why we’ve never seen the likes of Timmy, Craig, Matthew, Laurie, and Tabitha (all previous villains of Spider-Man in the comics, all excited to prove how much more they can be) before: they’re just not THAT compelling. And maybe that’s why, even 18 hours into a weekend-long Netflix binge, I still just can’t bring myself to care about them all that much.

I actually did like the first few episodes quite a lot, if only because they were buoyed by the presence of Netflix’s most exciting semi-obscure superhero, Jessica Jones. My skepticism that her presence was being used as a way of softening our heroes’ almost, dare I say, DC-ish pep, seems to have been warranted—her departure in episode 6 left a frustrating lack of counterweight to Spider Squad’s inherent fluff.

Every hour of binging from then on has been more tedious than the last, and while I’ll occasionally find something to enjoy in Illuminaughty’s Loki-turned-up-to-eleven swagger, the show has just not presented him as a sufficiently insidious threat. The reveal in this episode that he’s Craig’s brother was clearly meant to up the stakes, but all it served to do was to defuse any tension even further, since now he’s got a personal stake in the Spider Squad’s continued survival.

If there is an MVP of “A Battlefield is Love”, it’s Brett Dier as Craig, who does his best to charm his way through some really clunky expositional dialogue in the episode’s last scene. It’s meant to be a moment of vulnerability between Craig and Tabitha, but as Tabitha, newcomer Perri Renee Marlo lacks either the experience or chops altogether to sell some of this dialogue. For instance, the line that gives the episode its title– “They say love is battlefield, but I’m starting to wonder if a battlefield can be love”—is so laughably bad I had to press pause and take a walk before returning to the show. I guess that’s clever, Marvel, but, as the song goes, is that all there is?

I’m getting ahead of myself, since that final scene in the Spider Squad den is preceded by a lot, some of it a little fun but most of it absolutely inscrutable.

Timmy (whose name still feels a little outdated to me but what can you do, Spider Squad issue 1 came out in 1978) has just found out that he got a low score on his SAT because he was up too late prowling the city in search of justice to dole out, and informs the Spider Squad that he’s going to need to take some time off. Instead of them saying in chorus “Go for it, you do the least work out of all of us anyway”, much of the episode is dedicated to the rest of the Spider Squad trying to prove to him just now much they need him. Laurie especially is distraught at the idea of Timmy being less involved, since her crush on him is reaching an absolute boiling point. Her reaction to his announcement- cracking the windows of the Spider Squad den with her superpowered whistle yell- seems to foreshadow her descent into supervillainy, which the few fans of the comics already know to be coming.

Only Matthew seems adequately disinterested in Timmy’s continued involvement in the Spider Squad. I do like that two characters have the same superpower on this show- you’d think the amount of possible superpowers in the MCU would be limited, after all- but Matthew is right that there do not need to be two characters with the ability to melt into Alex Mack-type puddles. To prove how unnecessary Timmy is, Matthew purposefully provokes Illuminaughty into a fight on a day he knows Timmy can’t make it—but instead of the Spider Squad doling out the Timmy-less beating he knows they can, Illuminaughty decides to reveal his relationship to Craig before disappearing into that shimmery shadow thing he does (side note: shouldn’t the special effects look just a liiiittle less poorly composited?).

A side plot about Tabitha having to get rid of her cats because every time she glows they panic isn’t played for laughs but, because Marlo’s Tabitha is the most cartoonish thing in a universe that literally includes a talking space raccoon, it feels like a misguided slapstick comedy.

With only two episodes left in the season, I’d hope Spider Squad V would be more steady on its feet- after all, aren’t there eight of them? 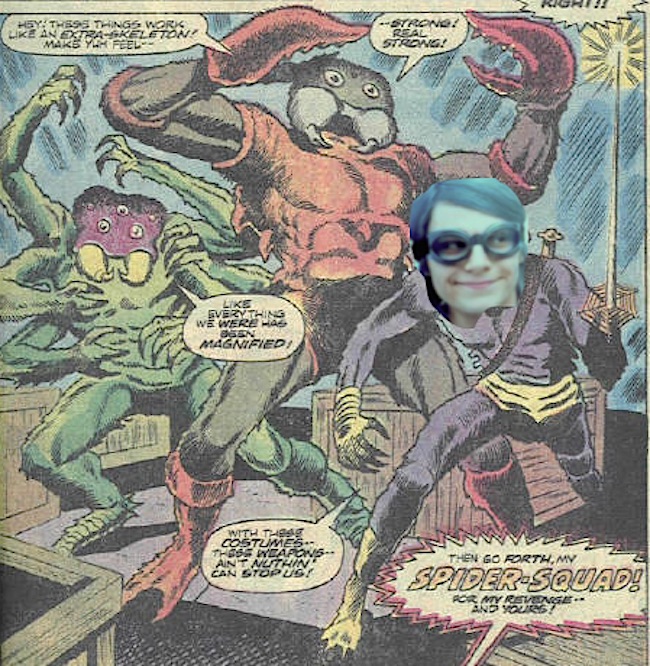