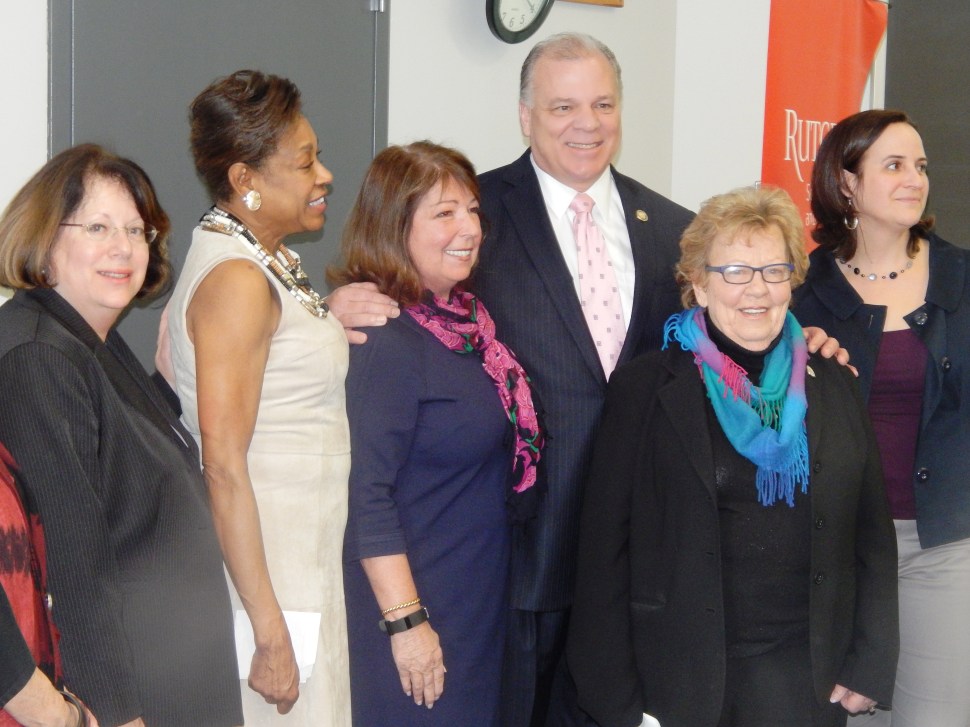 PISCATAWAY – The only man in New Jersey politics sufficiently secure in his manhood to wear a lipstick pink tie stood amid a brace of female colleagues at Rutgers this morning in support of equal pay legislation championed by Senate Majority Leader Loretta Weinberg (D-37) on the anniversary of Lily Ledbetter Fair Play Act.

They don’t expect Republican Gov. Chris Christie to sign the legislation, set for introduction in the Senate Labor Committee on Feb. 4th. But Sweeney and Weinberg with straight faces noted that if Christie vetoes it, the bill will be in the bloodstream “for the next governor.” Although he hasn’t announced, Sweeney is a known voracious 2017 competitor for guv.

“Maybe [First Lady] Mary Pat will have set him straight by the time it gets to his desk,” the senate majority leader said of the New Hampshire barnstorming Republican Governor Christie. “We are laying out a platform for when we have a new governor.”

Then Sweeney stepped to the microphone.

“It is a disgrace that in this day and age, women continue to make less than men for doing the exact same work. Equal pay will raise wages for women, helping families to get ahead, and it will benefit the entire state by strengthening the economy,” said the senate president. “I want to thank Senator Weinberg, who has championed this effort, and our colleagues for their commitment to pay equity. We are going to make this a priority in the new session, because this is an issue that matters.”

The women at this event today, staunch Sweeney allies, appear poised to lend their support if things get tough, which they likely will with four other hopefuls already jockeying in the Democratic Party re-primary field.

“Seven years after enactment of this landmark law, women in New Jersey and across the country still earn less than men for the same work. In 2016, this is unacceptable,” said Weinberg, the lead sponsor of the bill. “If we continue at the current pace, research shows it will take decades to achieve pay equity in New Jersey and more than 100 years to reach this point as a country. We have to take action for residents who are working to make ends meet. We also have to do this for our daughters and granddaughters, to make sure they grow up knowing that their work is just as valuable as their male counterparts’ and under policies that treat them equally. We are introducing legislation to close the wage gap in New Jersey that will be advanced in the new legislative session. Equal pay can’t wait.”

The federal Lilly Ledbetter Fair Pay Restoration Act extended the time period in which individuals can bring pay discrimination claims, resetting the statute of limitations each time a discriminatory paycheck is issued. It is named for Ledbetter, who after working for 19 years at the Goodyear plant in Gadsden, Alabama, learned through an anonymous note that she was paid less than her male coworkers for doing the same job. Ledbetter was unable to recoup the lost wages due to expiration of the statute of limitations. The federal law marked significant progress in closing the wage gap, but there is more work to do, the senators said. In 2016, women in the United States make only 79 cents for every dollar a man makes. In New Jersey, on average, women make 80.4 cents for each dollar a man makes. The wage gap is much greater for women of color: African-American women make 58.1 cents for every dollar a man does; for Latinas, the wage statistic is 42.7 cents. Declaring ‘Equal Pay Can’t Wait,’ legislators in more than 20 states are taking part in a week of action to address pay discrimination, which affects millions of working families in the United States.

The new legislation announced today, which is sponsored by Senators Weinberg, Sweeney and Cunningham, would help to close the wage gap in New Jersey through changes to the law that will combat pay discrimination.

“Racial and gender inequality still exists in modern day society. Things are changing, but not fast enough,” said Cunningham.  “As a new generation of women enters the working world, they should enter it knowing that society is acknowledging them as equals, no matter their gender, race, or religion.”

Between 1980 and 2000, women’s earnings grew while men’s wages remained unchanged, helping to narrow the gap in pay between men and women. However, progress has slowed, and in every state in the nation, women on average still earn less than men, according to research from the Institute for Women’s Policy Research. If wages continue to change at the current pace, women in New Jersey will not see equal pay until the year 2055, the organization found, and women in all states would not achieve pay equity until the next century.

“It’s a shame that even now, in the 21st Century, we are still waging the fight for equal pay for equal work. While the Fair Pay Act was a huge step forward to ensuring that women have recourse when subjected to unfair pay practices, more progress needs to be made,” said Greenstein, a co-sponsor of the legislation. “New Jersey must live up to the standard of equal pay for equal work for all people, regardless of gender, race, ethnicity or other social consideration. I look forward to being a part of that effort.”

“Research on pay equity is central to our work, because it is a measure of women’s status in the workplace. When the pay gap has been eliminated, we will know we have reached equality,” said Dr. Terri Boyer, Executive Director, Rutgers’ Center for Women and Work. “Women are increasingly responsible for the economic security of their families. For women of color, the impacts of pay inequality are often even greater felt as they are more likely than white women to be heads of household. Closing the wage gap will strengthen families and our economy.”

According to the Senate Majority Office, the legislation would: 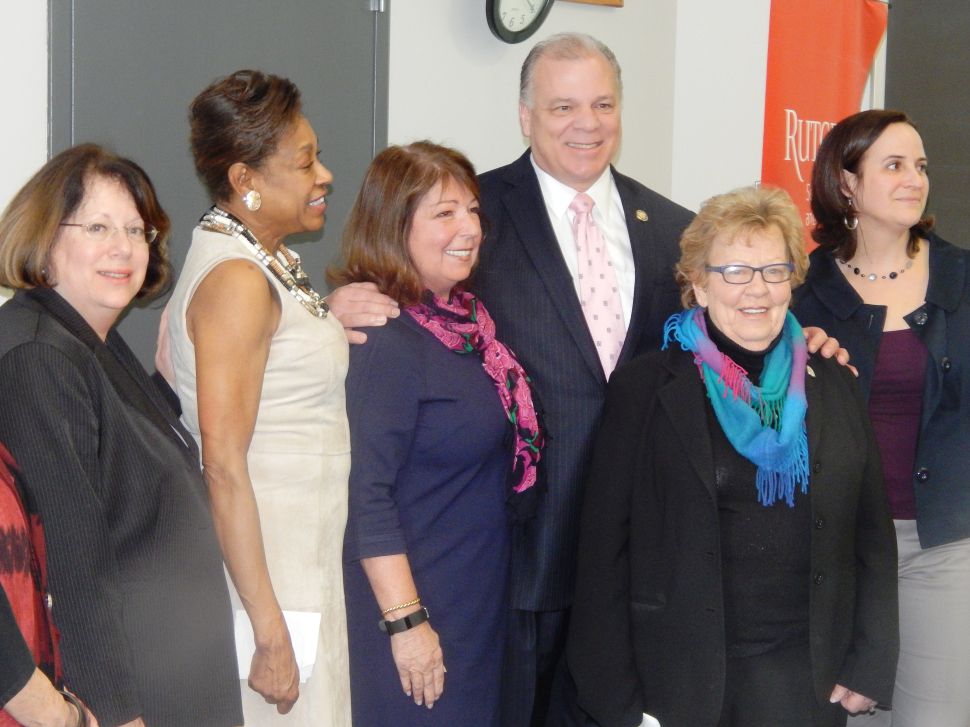