Over breakfast this morning, Eva Moskowitz seemed to rattle off a list of people who are skeptical of her Success Academy charter school chain—teachers union types who are suing her, the media that is scrutinizing her classrooms, the parents who are angry about suspensions or expulsions—some of whom showed up to confront her today.

Ms. Moskowitz, a former city councilwoman who recently announced she would not run for mayor in 2017, was speaking at New York Law School, part of their CityLaw breakfast series, and gave what was mostly a typical Success Academy stump speech: save for an introduction that was more of a defense against recent lawsuits and media stories, and for a conclusion that saw parents of former Success students livening up the typically staid CityLaw audience to demand apologies or answers from Ms. Moskowitz.

The charter school chain Ms. Moskowitz runs—which receives city tax dollars and often shares space with district public schools but is privately managed and does not employ unionized teachers—greatly outpaces regular district schools in terms of standardized tests. But it has also been the subject of scrutiny from those corners Ms. Moskowitz listed, with critics saying that the success is due to the schools not educating the most difficult students, weeding out struggling children, and using harsh discipline including frequent suspensions.

“It seems to have endless fascination with the media,” Ms. Moskowitz said of her school’s success. “There’s sort of a relentless gotcha effort: where’s the catch?”

Of course, Ms. Moskowitz said there really wasn’t one. The chain’s high performance is due to engaged teachers who make children “fall in love with school,” holding adults accountable for the performance of children; rigorous academic standards—and letting students fail sometimes; and innovation.

And yet she took time to address two frequent lines of criticism against her schools: the relatively small amount of special education students they educate, and the strict discipline. She allowed that the school had “a lot of work to do to improve our services of those children,” but argued the special education students they do serve perform better than district school students. She said the network was trying to expand its ability to serve children who need what is called 12:1:1 service, which provides a teacher and paraprofessional for 12 students. But she argued her critics had previously tried to stop her from expanding her charter chain.

As for discipline—highlighted in the New York Times and on PBS Frontline—Ms. Moskowitz said she simply had “a fundamental disagreement with a lot of our critics.” She said even very young students can be dangerous—and suspending them was a matter of safety.

“The truth of the matter is safety is the number one reason parents want out of the district schools, and we believe that our first obligation is for the safety of the children,” she said. “There’s no learning that can occur if we aren’t able to guarantee that. So we have a no-nonsense, nurturing approach to discipline.”

She argued that parents who had complained about the discipline at Success just didn’t want to accept it when their children had done something wrong.

“I know there are a lot of journalists in the room, and when you get those sources, you just have to be a little skeptical,” she argued.

But in addition to journalists—including the Times’ Kate Taylor, whom Ms. Moskowitz later name-checked—some of those sources were in the audience as well. One rose to ask Ms. Moskowitz about one school’s “Got to Go” list, a list Ms. Taylor wrote about that included students one principal sought to get out of his school. The woman asked if Ms. Moskowitz had apologized to the parents of the children on the list.

Ms. Moskowitz said the principal had been reprimanded and that she had personally apologize. But the woman at the microphone then told Ms. Moskowitz her name was Shanice Givens, that her son was on the list and that she’d gotten no apology.

“My son was number three,” she said.

Another question came from, Fatima Geidi, who spoke to Frontline about her son’s suspension. In response, Ms. Moskowitz released details of her son’s behavior to PBS, which Ms. Geidi said violated federal privacy laws.

Ms. Geidi said Ms. Moskowitz said she cared about children. “How can you say that when you violate the parents and the children and then you gaslight and abuse them?”

Ms. Moskowitz said she would not deny the school had upset some parents.

“They find their way, obviously, to he press. And I don’t deny we have upset parents that don’t got to the press,” she said. “And we try as respectfully as we can to resolve issues. I think we have a really high level of customer service.” 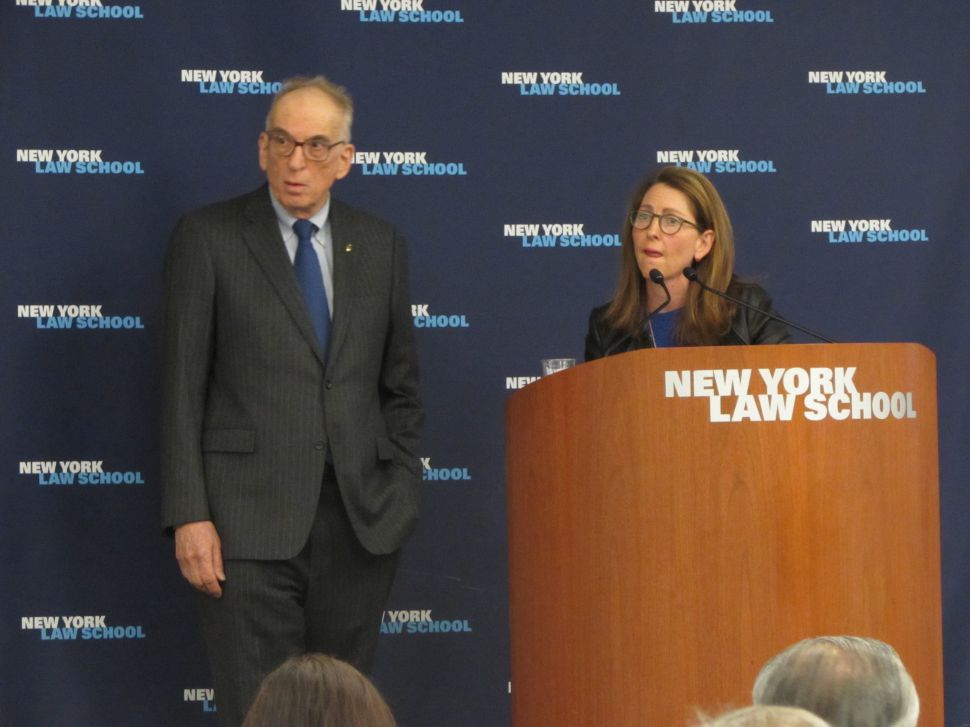