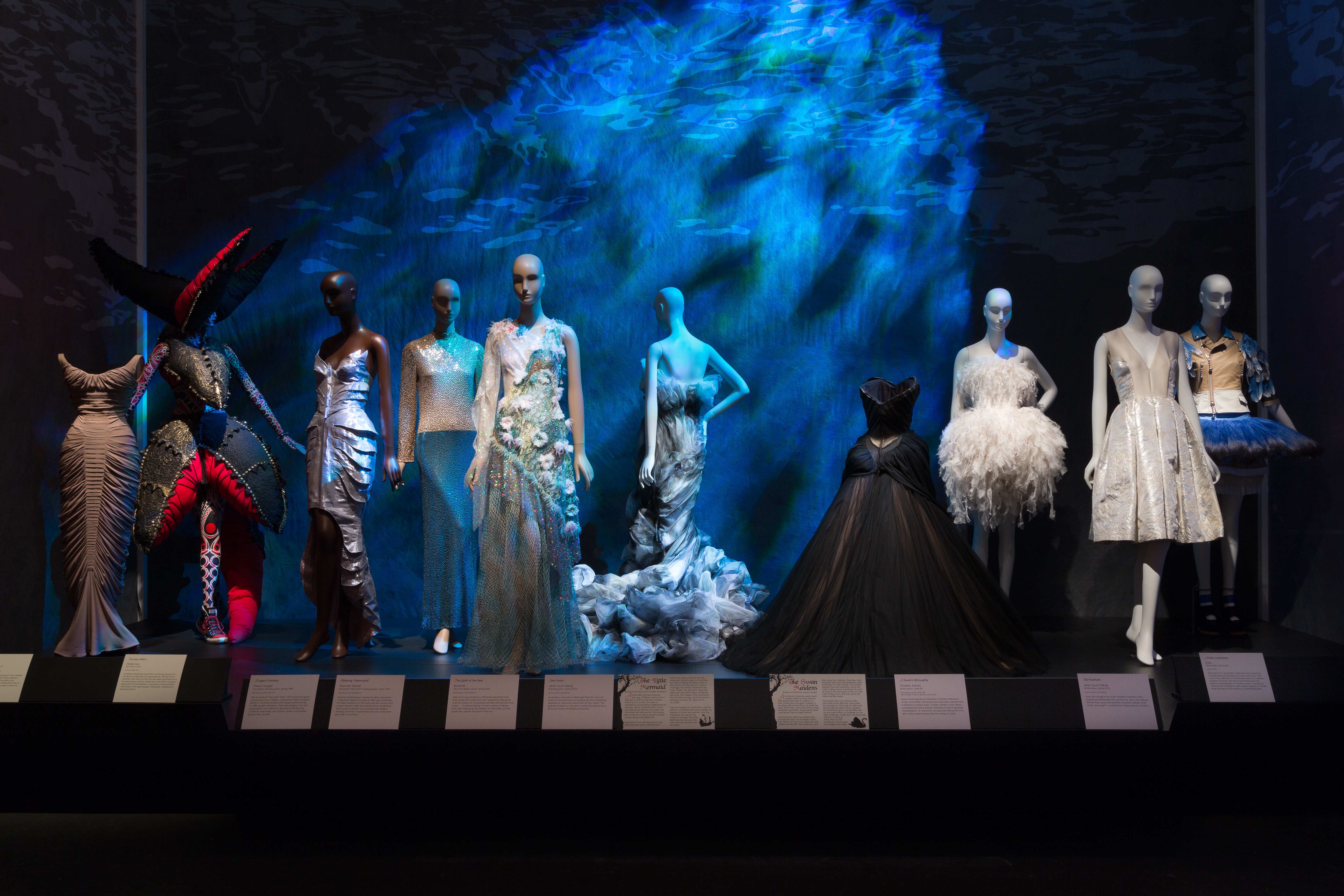 Clothing illustrating “The Little Mermaid” and “The Swan Maidens” (Photo: Courtesy The Museum at FIT).

For “Fairy Tale Fashion,” The Museum at FIT’s latest exhibition, which opens tomorrow, curator Colleen Hill has produced an extraordinarily vivid and and spellbinding exhibition, creating a fantasy land of fantastical clothes juxtaposed against moody lights and filmy screens.

The idea for the exhibition was sparked Dolce and Gabbana’s Fall/Winter 2014 collection’s fairy tale theme. According to Ms. Hill, “Fairy tales are simultaneously fascinating and familiar, and that’s what makes them such a rich subject for fashion.”

Fairy tales are known for their “enchantment” upon the reader, thanks to the vivid descriptions of  the world the characters live in, using elements such as clothes to illustrate story symbols and to push plot. Fantasy and fashion are inexorably linked, which is why Ms. Hill believes that designers, “consciously or subconsciously continue to be influenced by fairy tales.” 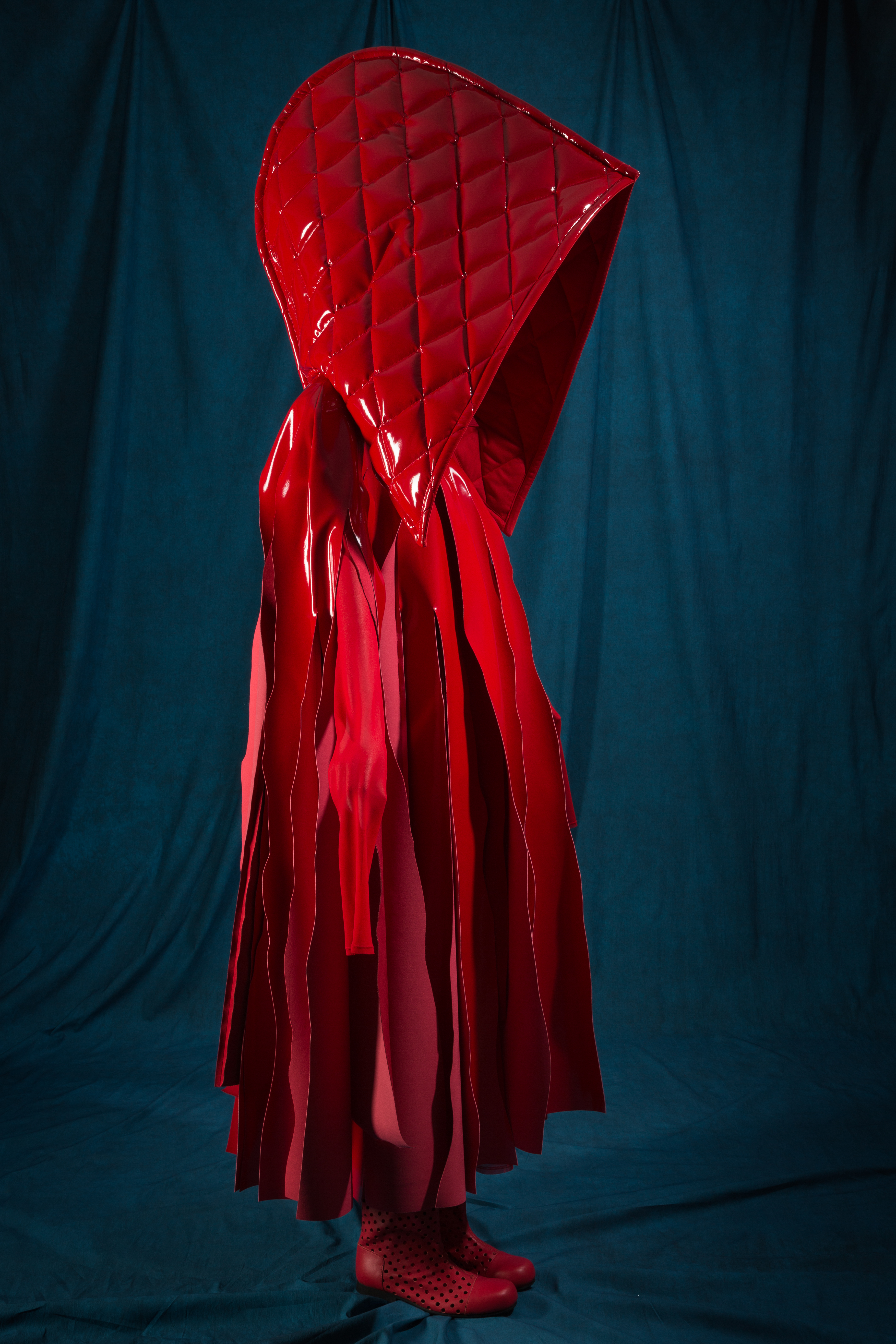 The show is centered around 15 fairy tales, including Snow White, Cinderella, The Little Mermaid and The Wizard of Oz. Although familiarity with these stories tends to derive from sanitized, Disney-style films, Ms. Hill used original and earlier versions by Germany’s Brothers Grimm, France’s Charles Perrault and Denmark’s Hans Christian Anderson—and explored the macabre undertones in their stories. 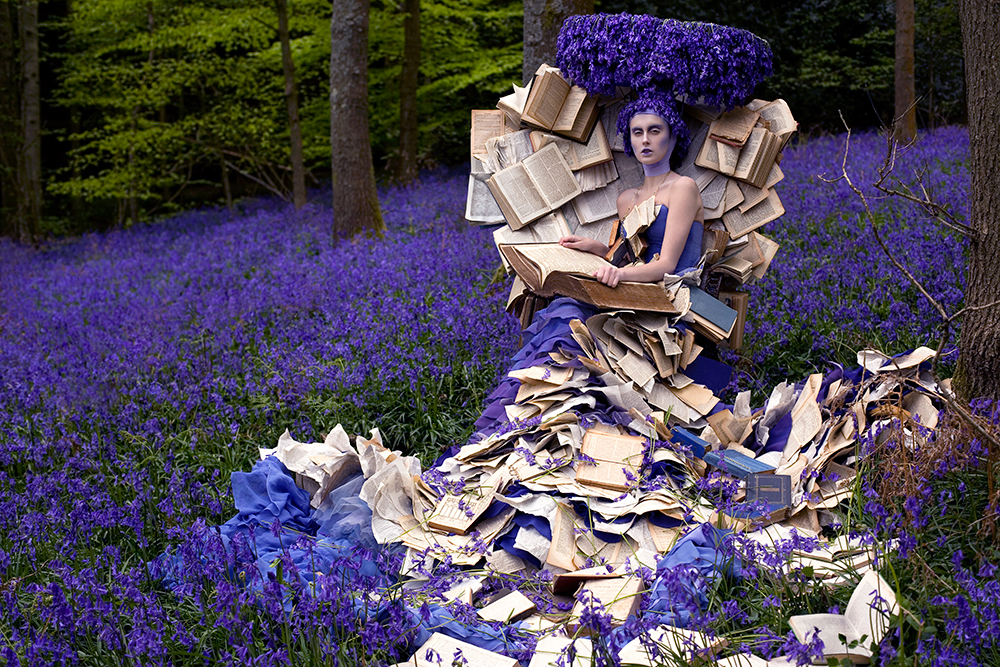 There were a few points where the connection between garment and story seemed a bit tenuous, but the show glides past these glitches with a tightly curated and well-organized methodology.

“Fairy Tale Fashion” is like a dive into a magical, surrealistic world. The winding path going from story to story is framed by filmy, dreamlike screens, depicting abstracted melancholy forests for the Little Red Riding Hood, terrifying jagged cliffs for The Wizard of Oz, refracting blues and greens of the deep sea for The Little Mermaid, and stone parapets surrounding the spindly castle towers for Sleeping Beauty. It creates a maze, drawing you ever closer to the center, to the castle where Cinderella meets her prince. 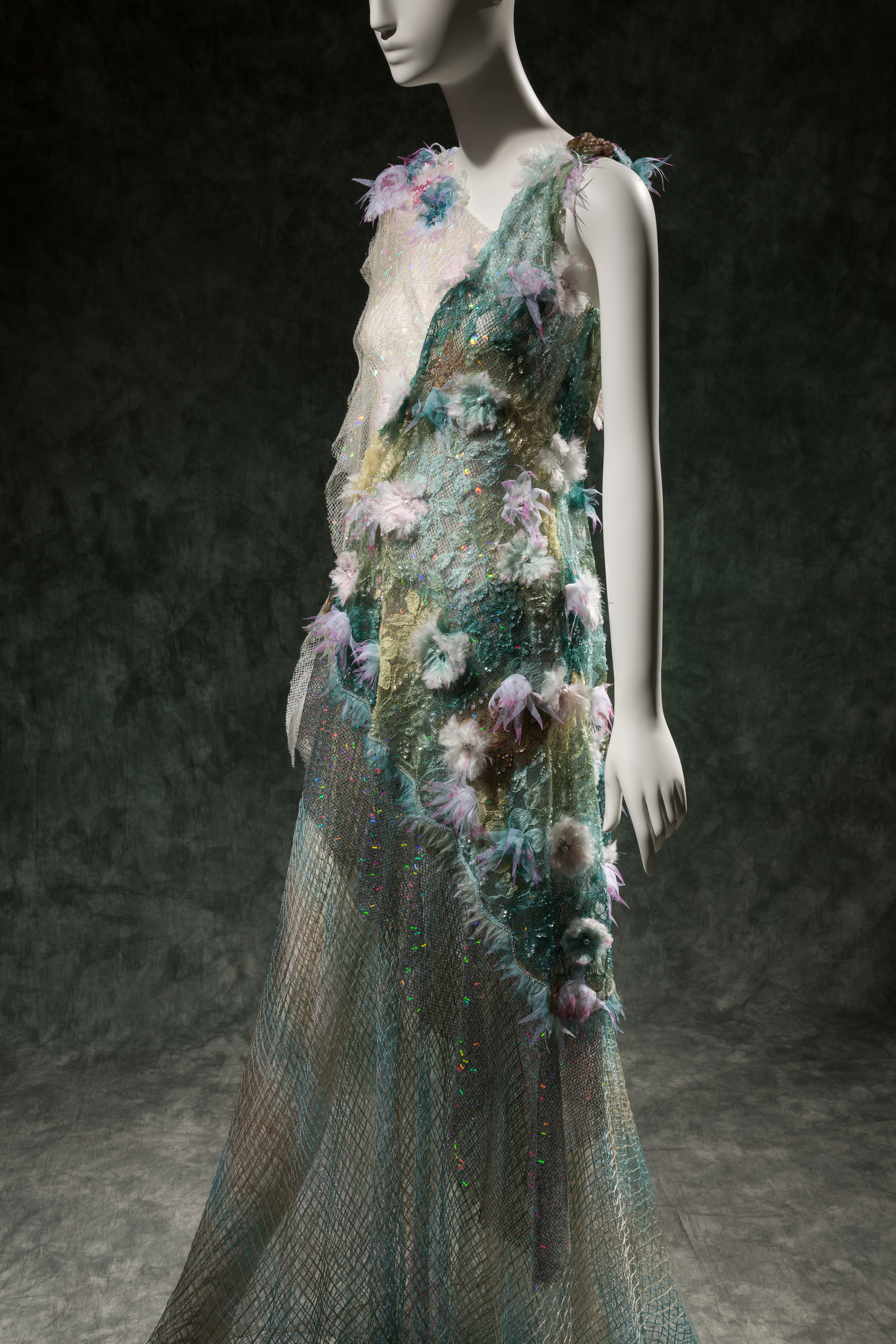 Each section tells a different story. You begin with Little Red Riding Hood, where a gothic typeset placard (there is one by each section of the exhibition) summarizes the story. The instant recognizable quality of the red hooded cloak is the focus here, with an 18th-century country cloak next to a beaded Altuzarra hooded gown and a futuristic, patent leather dress with a peaked hood by Commes des Garçons. You then proceed into the thorny thicket surrounding the Beast’s castle for Beauty and the Beast. The rose—a prominent theme—is depicted in a rose dress by Rodarte, while the Beast’s various forms of bestiality, as interpreted by illustrators over the years, are displayed. You then turn a corner and enter the rabbit hole with Alice in Wonderland, a story known for its imaginative and fantastical themes. A Manish Arora dress inspired by Tim Burton’s Alice in Wonderland film is adorned in playing cards, paired with harlequin tights and a rabbit head; a creative interpretation of the Queen of Heart’s army of playing cards.

After your adventures in Wonderland, you are immersed in the underwater world of The Little Mermaid and a lesser known tale, The Swan Maidens. Ethereal dresses in layers of gossamer tulle and frothy chiffon highlight the mystical mermaids and magical swans in both stories. Next is the Wizard of Oz, where rich colors like Dorothy’s Christian Louboutin sparkling ruby red slippers are displayed next to an emerald Molyneux gown for Dorothy’s arrival to the Emerald City. 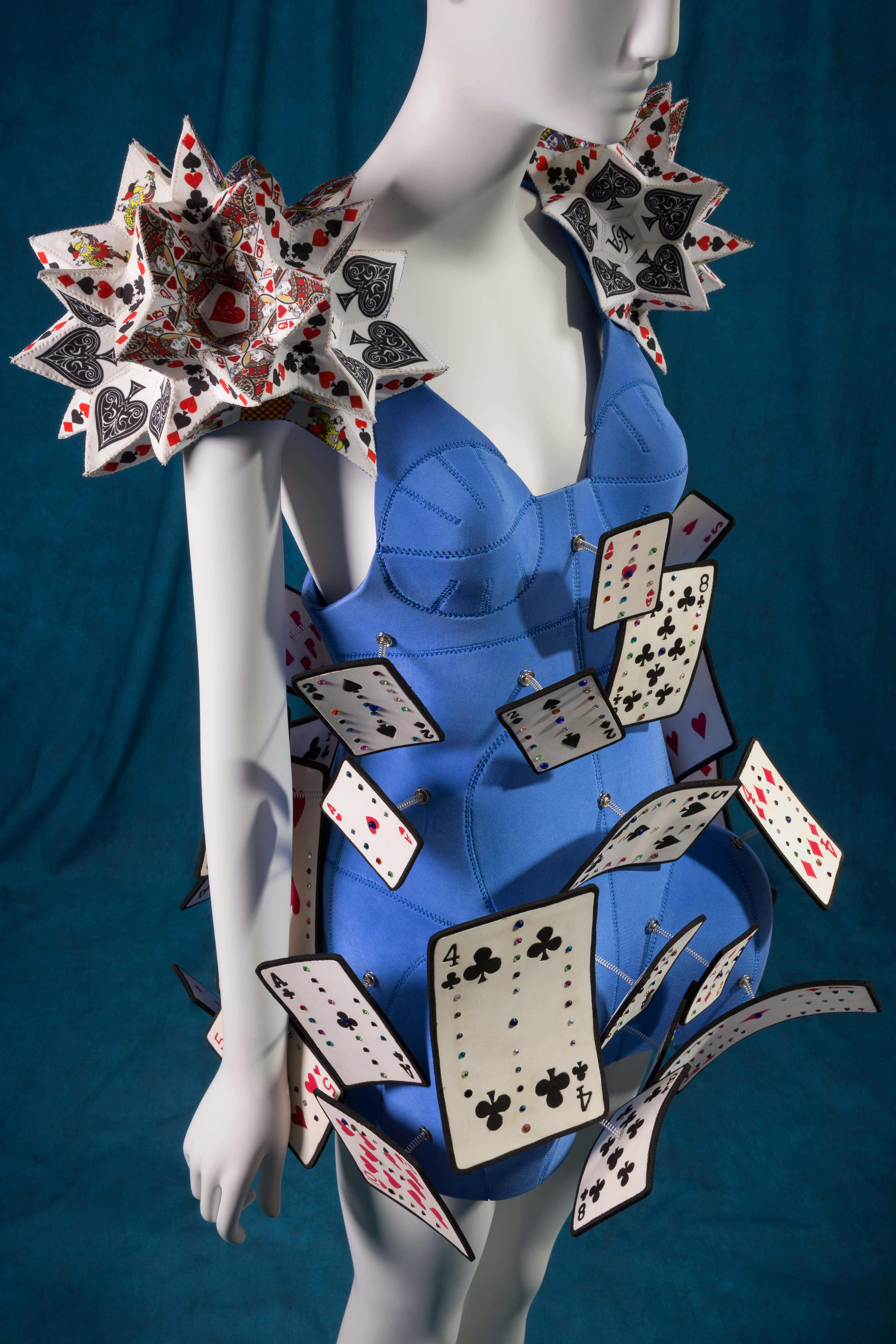 The stories continue, leading to the forest of the seven dwarves, where Snow White eats the evil queen’s poisonous apple, depicted in a gem-encrusted Judith Lieber apple clutch. A highlight here is the recreation of Alice + Olivia’s glass coffin from the fall 2014 collection where a model lay down in it wearing a rhinestone studded gown in black – the color of mourning and death.

The exhibition ends with the ultimate rags-to-riches story, Cinderella, of an ordinary girl who marries royalty. On one side are Cinderella’s ragged clothes as a maid: one of which is a charred and ripped Giles fall 2012 gown. The other, glass slippers by Naritaka Tatehana and a gold dress from Altuzarra’s spring 2015 collection—represent Cinderella’s transformation into a princess at the ball. It is a happy ending to a phenomenal show, and a reminder of why fairy tales continue to captivate: they are an expression of hope and fantasy intertwined with the idea that dreams can possibly come true.

“Fairy Tale Fashion” will be on view in The Museum at FIT’s Special Exhibitions Gallery from January 15 until April 16, 2016 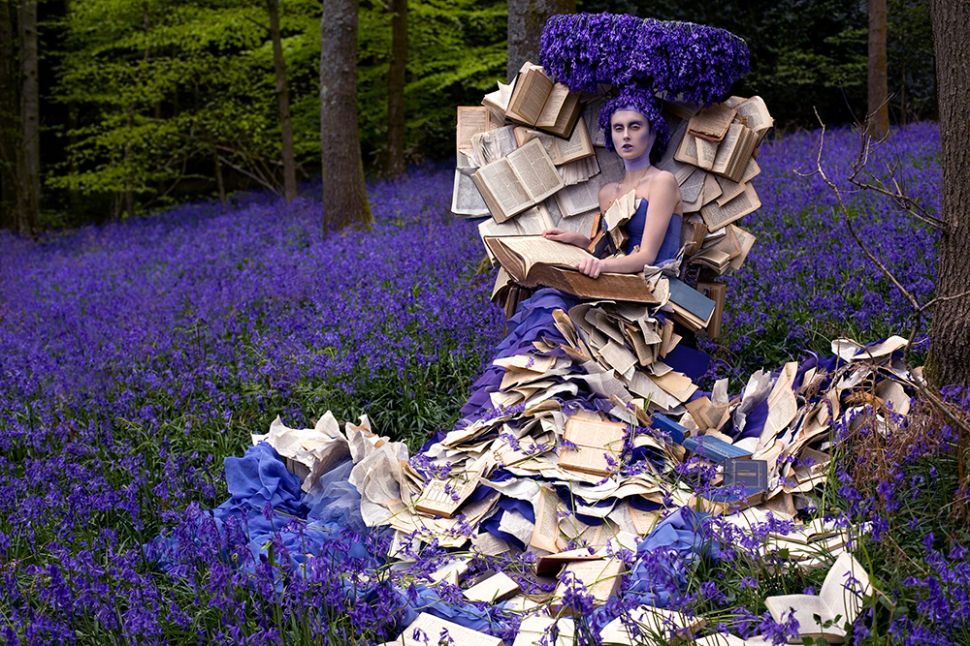