Acts of terrorism, regional wars and the horrifying migrant story in Europe continue to make headlines. Despite the gruesome news, The New York Post reported that no fewer than three fights had broken out at this fall’s Hermès sample sale. The image of well-to-do Westerners coming to blows over silk scarves is disturbing enough given the larger conflicts of our times—but then came the news that some buyers had employed personal assistants to stand on line for 15 hours to secure a coveted spot, all for the opportunity to acquire a stray Birkin or an enameled bracelet at a discount.

When it comes to luxury goods, it seems even those at the top of the social pyramid lose all perspective, and instead slug it out like WWE wrestlers as they compete for the coveted 30-percent-off prize. Sample sales—once the domain of the middle class—have become a high-end blood sport.

I was seated next to Social Sex-ray at one of fall’s most glittering galas. “I was assaulted at the [ultra luxury] sale,” she groused. “This short woman from Second Avenue literally pushed me and ripped a sable chubby out of my hand like a starving person at a buffet. I was about to knock her back when I saw the crazed look in her eyes—like a charging hyena. It was so frightening I just let her have it, which upset me because it was one-of-a-kind and it was 40 percent off.”

‘A sable chubby for that price is better than an orgasm. I saw a woman hip-check someone over a vest. I was so upset I had a therapy session about it.’

“She apparently needed it more than you do, cherie,” I said, patting her hand like I was calming a petulant 5-year-old. “You have a closet full of sable, dear.”

“That’s not the point,” she fumed. “A sable chubby for that price is better than an orgasm. I saw a woman hip-check someone over a vest. I was so upset I had a therapy session about it.”

“And what did your therapist say?” I asked.

“When you lie with the pigs you get dirty,” she said, and downed a flute of champagne.

It was a balmy October night and Dana and I were catching up with Hair-ess and husband Aussie Sportsman at Yefsi Estiatorio, enjoying gigande beans and copious bottles of Greek sauvignon. A transplanted Nob Hill Society gal who hails from a long line of noted shoppers, Hair-ess broke down the subtle hierarchy of sample-sale invites, shaking her auburn mane.

“There’s actually a snobbery about when you receive your invitation,” she said, referring to a couture furrier’s upcoming sale. “If most people are invited for Tuesday and special customers are invited for Monday, than getting a spot on Sunday does make one feel a bit special.”

“Ouch! You were invited for Sunday?” Dana said, laughing. “I was invited for Monday and I thought I was special.”

“Monday is still high priority,” Hair-ess declared. “First, you have to check your bag, as if I’m really interested in stealing. Then they take you into the back room with the special rack.”

“Like the VIP room in clubs in St. Tropez!”

“Correct. And once in, you have to move quickly. The women can be quite cutthroat trying to snag what you are looking at. I once saw one woman pull off another woman’s wig!”

“And then?” I layered a dollop of taramosalata on to a pita triangle.

“You take off your clothes in an open dressing room full of random women,” she groaned.

“Is it awkward when you see people you know?” I asked.

“Absolutely. Everyone changes quickly, trying to squeeze into sample sizes. You end up with someone’s derriere in your face. It isn’t pretty. I also saw [famous ’80s cover girl] flipping through the racks.”

“Any cellulite?” I asked.

“She was smart enough not to put herself in that position.”

“Did you wear any special underwear?” I asked, purely for investigative purposes.

“I wear La Perla for sample sales,” she said.

“What about me?” Aussieman grumbled. “I get flannel and the girls at the sample sale get La Perla?”

Hair-ess arched an eyebrow. “Just think of all the money you’re saving.”

There are some who find the whole scene distasteful. Dana and I were circulating at the Rita Hayworth gala for Alzheimer’s, chatting about sample sales with one of New York’s most successful businesswomen.

“I really don’t go,” SBW said, clicking open her chic Jill Haber geometric evening bag to retrieve her cell. “I am not interested in picked-over merchandise and I don’t want to fight it out with those crazy gals.”

“Why do you think they’re crazy?” I asked.

“Don’t mention my name, but I see a lot of jealousy and desperation. Especially as women get older, they get desperate for attention. That’s why the jewelry gets bigger.”

She pointed to a well-known gal who was practically stooping from the carat weight of the diamond chandelier around her neck. “If they need to go to sample sales and fill up their lives with merchandise, I don’t want to be around it,” SBW explained.

“That’s pretty harsh,” I protested. “Maybe someone just wants to get a pair of shoes?”

“It’s the women who will snatch something out of your hands. First it starts with a dress.” She paused dramatically. “And then it ends with your husband.”

The über-stylish menswear designer Jay Kos pulled up to the Bowery Bistro on his Moto Guzzi in green snakeskin pants and talked about the numbers game.

“Sample sales take the guilt out of the equation,” he explained. “Hedge fund managers shop with me, so I understand their mentality. For them, it’s all about the numbers. The wife says, ‘Honey, I got a $15,000 dress marked down to $3,000.’ They are fist-bumping. It’s hedging the dress. She will wear the dress to a few events and then, being the wheeler-dealer she is, she donates it for a tax write-off or eBays it, eeking out the remaining funds from some unsuspecting fool who had no idea it was a sample-sale item.”

‘It’s the women who will snatch something out of your hands. First it starts with a dress. And then it ends with your husband.’

“And her husband?” I asked.

“Sample sales add to the foreplay?”

“If you are a chic person, shopping on racks is a disease. Why would anyone want that if they have the money? These sales take the luxury out of luxury. They give you a brown paper bag or those plastic bags that look like you are cleaning up NYC trash. That’s luxury?”

“It’s like having an affair. They get a secret kick out of the discount. The price reduction is a drug and if they can’t get their fix they go on a rampage, pulling each other’s hair and throwing right hooks, all for a beaded top.”

After two weeks of black-tie events, parties and business obligations, Dana and I ventured out for a casual dinner at Candle 79. The thought of solo plans and a vegan cheese plate beckoned like a well-earned spa day. I was in our lobby when the elevator opened and Dana emerged, wearing an asymmetrical taupe cashmere cape.

‘The price reduction is a drug and if they can’t get their fix they go on a rampage, pulling each other’s hair and throwing right hooks, all for a beaded top.’

I complimented her on it. “Is that new?” I asked.

“I got it at a sample sale two years ago, but I couldn’t wrap my head around how to wear it or what to wear it with,” she conceded.

“It took you two years to figure it out?” I marveled at the indecision.

“It’s an impulse purchase where you question whether you really needed it.”

“Twenty-four months to come to the conclusion?”

“What happened?” I was enthralled.

“I saw a woman trailing me. It’s classic sample-sale behavior: Someone tries something on and if it looks good, they trail you to see if you put it down so they can go in for the kill and snatch it. They try not to be obvious when they stalk you.”

Dana nodded. “Like tracking an animal in the jungle. It’s all a psychological game. This woman saw that I put it down for a moment as I tried on something else, and went in for the kill.”

“I dove in and snatched it up. She was ready to slug me and said she saw it first, but I stood my ground. Plus I was wearing heels and towered over her. One has to protect their territory. But that’s how I knew it was good: she got crazy over it. After all, if I try something on at a sample sale and women aren’t running to find the same thing or are trailing me, I know it’s not great.”

I thought for a moment. “You’re saying you bought this because you knew another woman wanted it?”

“That’s the secret of sample sales, Richard. And life…and men. If someone else doesn’t want what you have and isn’t trying to take it from you, it isn’t great. Don’t you know anything about women by now?” 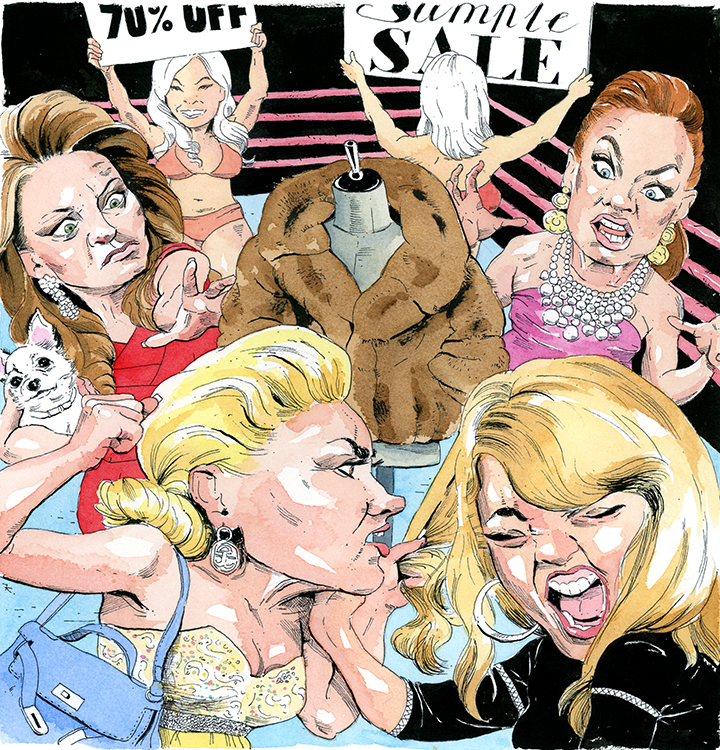