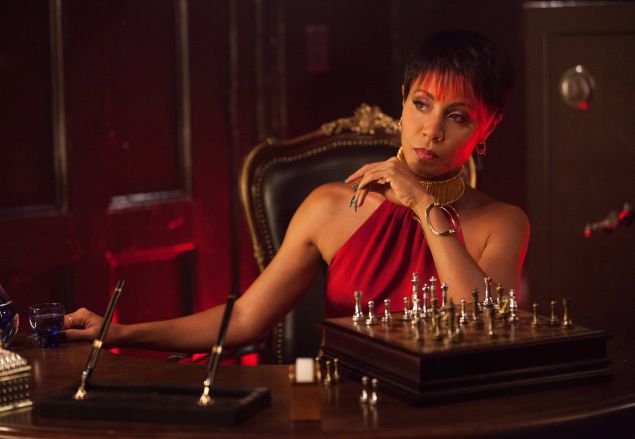 Everyone has different fears, and many wake up every single morning hoping these fears will keep at bay for one more day. For some it’s job-related. For others it’s about world issues, or family matters, or personal health. No matter the subject, the constant is the feeling that one fateful day, that fear will arrive on your doorstep.

Well, friends, today is my day. TVLine reports Jada Pinkett-Smith will reprise the role of Fish Mooney on Gotham for “multiple Season 2 episodes.”

I can confidently say Gotham, as a whole, improved immensely from its debut season to its sophomore outing, and a large, wig-shaped reason for this was the exclusion of Ms. Pinkett-Smith’s Fish Mooney. It’s nothing person against her as an actress, really, but here was a big swing and even larger miss at integrating a new character into the show’s larger mythos. Fish–and the mob story in general, really–just didn’t fit. At its best, Gotham is unhinged, but measurably so. What usually tipped it over into “trying too hard” territory was Fish, a character constantly in the middle of a weird balancing act between hyper-serious and 60s-level-camp, all wrapped inside a poor Eartha Kitt impression.

If you think something like sending Fish to a remote island and plucking out one of her eyes fixed the situation, you’d be very wrong.

But like the Dark Knight himself, I am here to act as a symbol of hope. There are intriguing ways for Gotham to bring back Fish, and none of them include the phrase “I told you, Fish can swim.” Okay, one might. 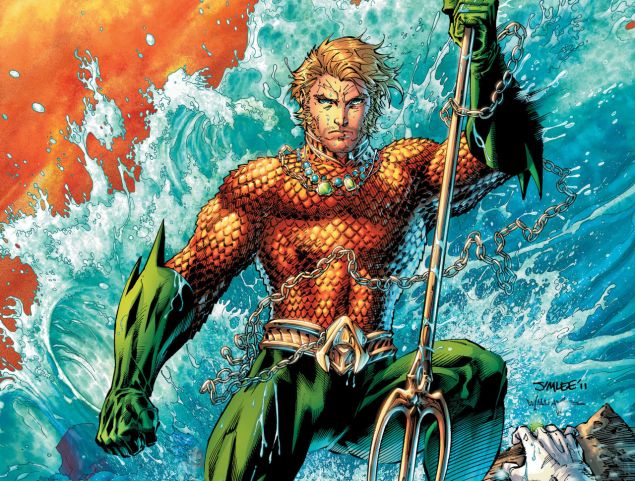 The last we saw of Fish, she was plummeting toward toward the icy waters of Gotham City harbor. Yeah, it’s easy to say she swam and/or was washed up on shore, but wouldn’t it be more fun to say she actually was hanging out at the bottom the ocean this whole time? And what better way to introduce the world’s most powerful punchline, Aquaman? Hey, if you set a show in the DC Universe you have to eventually accept there’s an entire society living underwater. It doesn’t even have to be a big deal! Just have Fish casually mention she spent time in Atlantis. Throw in some flashbacks featuring a dude who looks like a younger Jason Momoa–or, actually, just cast Alan Ritchson–and blam you’ve established the existence of Bruce Wayne’s future Justice League buddy. 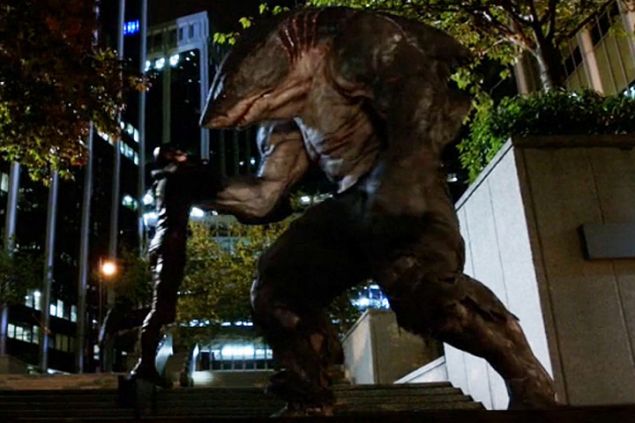 All those things I said about Aquaman? Qua-fucking-druple them for King Shark, the badass, 10-foot-tall shorts-wearing shark-man hybrid who already made an amazing appearance on The Flash. I will tattoo a full apology to Fish Mooney on my face if the character emerges from the damn ocean with King Shark in tow. Make it a whole thing, like with Selina Kyle, where a teenaged King Shark thinks Fish is just the coolest. Oh man, have like a high-school-aged King Shark–at this point I assume only Prince Shark–with a major chip on his…shoulder?…because his parents left when he was twelve and society doesn’t understand his shark-related anger. 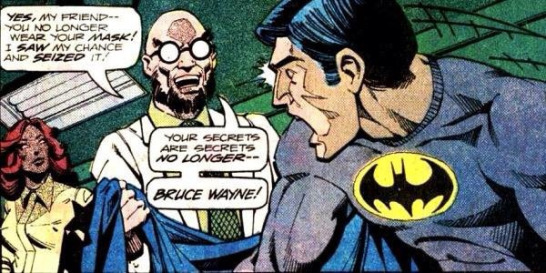 So this scenario is actually pretty likely, seeing as B.D Wong is confirmed to play Hugo Strange, and keen observers noticed he’s keeping Fish’s body in a tank under Indian Hill. Basically, Hugo Strange is the evil scientist of the Batman universe, and raising a well-known mob boss from a watery grave is not outside his wheelhouse. Which is fine, totally fine, you do you Hugo. But hey, science has come a long way, especially if you have zero morals when it comes to human experimentation. So if you Hugo wants to bring Fish back as, say, a mindless drone incapable of speaking, that would be pretty cool. Unfortunately, Strange’s first beastly creation from the comics, Amygdala, already appeared on Gotham, so we can’t just mash up Fish’s origin story with his. 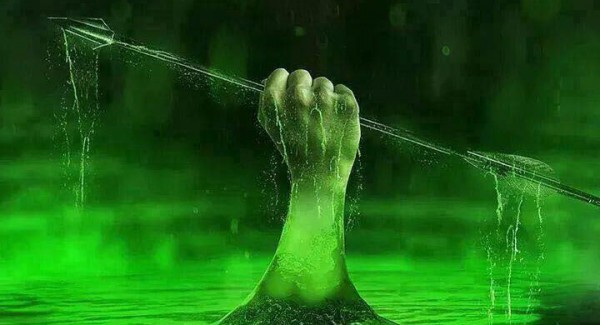 How else to bring back the (assumed) dead, besides horrific Frankenstein experiments? The go-to magic mode of resurrection for DC, besides endless relaunches, is the Lazarus Pit. For the uninitiated, Lazarus Pits are these naturally occurring pools filled with the slime from Nickelodeon that also happens to have restorative powers. Side affects include: losing your mind, insatiable blood-lust. They are mostly used by Batman’s father-figure replacement/immortal assassin Ra’s al Ghul. Arrow used the pits to revive both Thea Queen and Sara Lance, to very mixed results.

I understand that the CW branch of DC shows–Arrow included–pretty much has dibs on the Lazarus Pit. But can we just do a little trade, just this once? Gotham gets King Shark and the Pits, and CW gets whichever Gotham actor has the best set of abs.

Bear with me on this one, because it’s complex.

So Fish climbs out of the water, fatigued but determined, grumbles the line about Fish swimming that YOU KNOW is coming, and then Oswald Cobblepot immediately umbrella-shotguns her in the face. Because he’s a boss now, and isn’t taking Fish’s shit.

And then, I don’t know, Oswald eats her. Say what you will about how great Robin Lord Taylor is, Penguin has to get fat eventually. 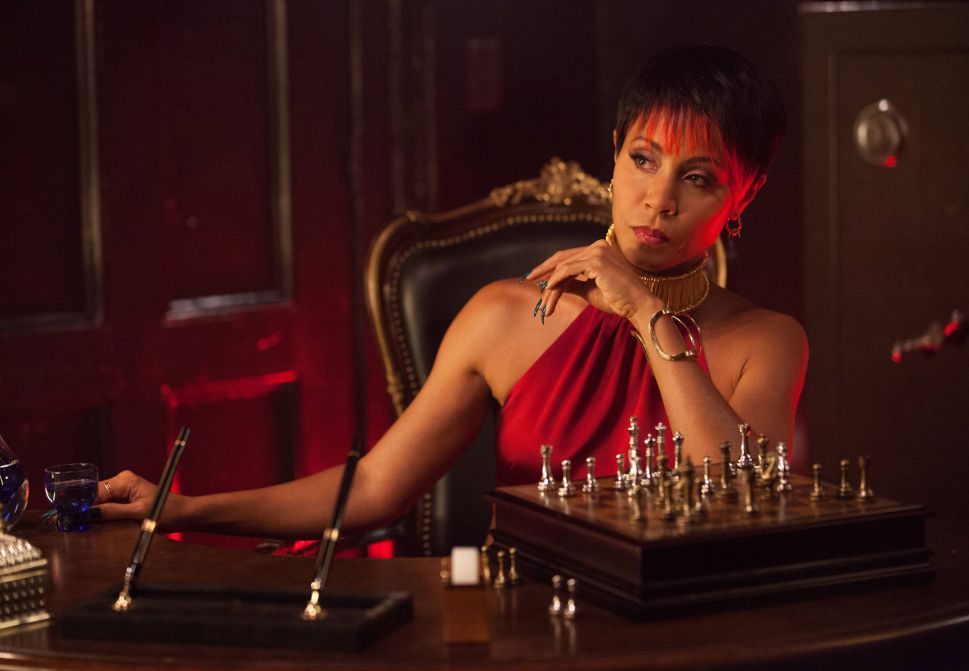