the firm as Senior Counsel for Legislative and Regulatory Affairs.

McGlynn served as Chief of Staff to Governor Thomas H. Kean from 1985 to 1990, and prior to joining KZG, operated his own consulting firm, ERM Government Affairs.

“Ed McGlynn is a name that is widely known and even more respected in New Jersey.  We’re excited that he’s chosen to join our team and eager to put his lifetime of experience to work on behalf of our clients,” said Kaufman.

“There really is no substitute for experience and Ed’s reputation, integrity and insight are a great addition to our firm. Having run the Governor’s Office and managed state government, Ed’s help developing strategies that impact outcomes will be invaluable to our clients,” Zita said.

McGlynn’s clients – which include the NJ Amusement Association, The Kintock Group, and the Thoroughbred Breeders Association of NJ – will join KZG’s roster of Fortune 500 companies, labor organizations, trade groups, hospitals, and others.

“Adam and Trish have built an outstanding team known for doing their homework, thinking outside the box and getting the job done,” said McGlynn. “I’ve always worked to deliver real value to my clients and KZG takes that very same approach.  To borrow a phrase from my good friend Governor Tom Kean, we’re ‘perfect together!’“

McGlynn began his career in state government in 1982 as Special Assistant Deputy Attorney General and became one of the longest serving Governor’s Chief of Staff after holding the post for Kean’s entire second term.  After leaving government, he practiced law at Robinson, St. John & Wayne, provided public affairs and lobbying services at the Alman Group, and served on numerous boards and commissions including The State House Commission, The Board of Trustees of McKendree University (his alma mater in Lebanon, Illinois), Meridian Health System’s Government Affairs, Health Resources, and Nursing & Rehabilitation Boards, and the New Jersey Racing Commission where he was appointed by Governor Whitman and reappointed by Governors Codey and McGreevey.

He will continue to serve as the General Counsel to Jenkinson’s Boardwalk and their related entities, a position he has held since 1992. 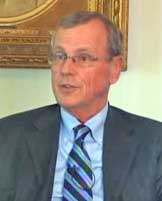