It isn’t pleasant being attacked in front of millions of viewers, as Newt Gingrich did to Chris Wallace of Fox News at a Republican debate four years ago—not that, to Mr. Wallace, it came as a surprise. A veteran of these spectacles, Mr. Wallace knew that GOP presidential hopefuls treat debate moderators like piñatas.

On January 28, Mr. Wallace will be at it again, co-moderating (with Bret Baier and Megyn Kelly) the last Republican debate before the Iowa caucuses. Mr. Wallace will again fashion questions provocative enough to keep the candidates on their toes without inviting their abuse. But it won’t much matter: as targets go, moderators are simply too tempting.

And there are consolations, like the record audiences these debates have garnered—as large or larger than the largest crowds Mr. Wallace’s famous father, Mike, got in the heyday of network news. It makes Mr. Wallace wonder why the Democrats won’t debate on Fox. “I understand they think we tilt right, but there are a heck of a lot of independents and moderate Democrats who watch so I think they are missing a huge audience,” he said. He then landed a zinger of his own, likening the Clinton-Sanders-O’Malley debates to “a witness protection program.” It’s a line Mr. Gingrich himself might appreciate.

You moderated your first presidential debate in 2008; since then, do you think that the role of the moderator has changed? We should be as invisible as possible—like umpires in baseball games. To the degree that anyone notices us, let alone is talking about us at the end of the game, that’s a failure on our part.

Do you feel the scrutiny on moderators is more intense than it used to be? To some degree it’s a function of what happens in the debate. I became a big player in a debate in 2011 in Ames, Iowa, August of 2011—not that I remember. Because Newt Gingrich took after me [for asking about his campaign’s struggles], and he has since admitted it was a ploy—that no conservative candidate has ever got in trouble for going after the media, even a Fox News anchor.

How long after that debate did Gingrich admit that? Months later. He kind of chuckled, “It’s part of the game.”

The bell is tougher to talk over than a moderator saying “Senator!” One of the lines you can always use in your back pocket is, “Senator, you agreed to these rules, as did every body else.”

Has anything memorable happened during commercial breaks? Have candidates come down and said, “You’re killing me; I need more time. You’re not being fair.” Sure. They work the refs.

Can you think of other interesting things candidates have said to you once a debate or an interview is over? We had Ben Carson on Fox News Sunday right after the Paris attacks. I said, “In that kind of attack what’s the first thing that you would do?” He kept giving generalities. There are a lot of things he could have said: “Call a meeting of the National Security Council.” He didn’t really have any answer. It was one of the first times he displayed his weakness on foreign policy. I talked to him afterwards and to his credit he wasn’t angry. He basically said, “I’ve got to do better.”

Who has done moderating well? And who hasn’t done it so well? Jim Lehrer did it very well for years. He has done an excellent job—it’s an odd thing because you want to get into it and you want to get the candidates provoked and going at each other, but you want to be the third man in the ring. It’s a little easier in a presidential debate; because you’re not going to see the same kind of histrionics in a general election debate in the fall as than in one of a number of these [primary] debates. The only one that sticks out as an egregious mistake was Candy Crowley in the last town hall meeting between Obama and Romney. First of all, I think she was wrong on the facts. I don’t think Obama did specifically say that Benghazi was terror in the Rose Garden the day after the attack, but secondly she shouldn’t have gotten involved in that in any way. There are two candidates on the stage. Let them work it out; you don’t need to weigh in.

Given all the debates you’ve moderated, can you think of one where you felt especially good or especially bad when it ended? On a big issue like the war on terror, when you can get the candidates engaged with each other, that can be terrific. Ron Paul and Rudy Giuliani being particularly interesting. I can remember one time, where I asked Giuliani a question and he went off on a tangent and I said, ‘I’ll give you 30 extra seconds to actually answer the question,’ and the house went down. You feel good about moments like that.

Any strategies to cut off filibustering candidates? Yes. Brit Hume said we need a bell. If you ring the bell enough, people can’t ignore it.

Some politicians, such as Carly Fiorina and John Kasich, ignore the bells and buzzers. Not with us they haven’t; the bell is tougher to talk over than a moderator saying “Senator!” One of the lines you can always use in your back pocket is, “Senator, you agreed to these rules, as did every body else.”

Will Rupert Murdoch or Roger Ailes throw a question or two into the mix? They never have.

Does it feel any differently to be on camera when 30 million people are watching a debate rather than, say, 3 million people on a Sunday? No. But the debate is different than a Sunday show. You do have candidates on a stage, all of who have considerable credentials and their own strategy, and you feel like you are going into a heavyweight championship. 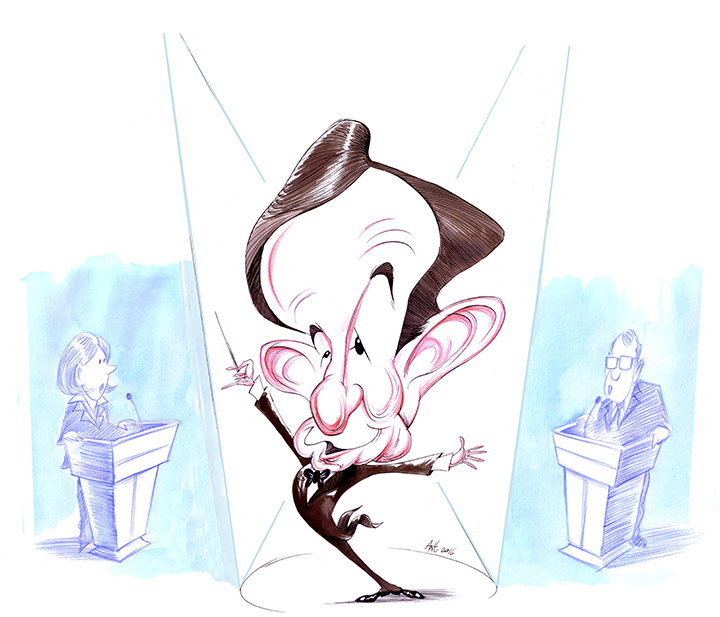