Exit bustling Atlantic Avenue, duck into the sprawling storefront and consider the array before you: 140 giant glass jars, each filled with a different nut, dried fruit or candy. Additional bins, stacked on surrounding shelves, each contain something foreign or familiar, from oatmeal and amaranth and to dried molokia, a Middle Eastern spinach. Back further, a bar touts 39 types of olives, pickles and marinated peppers. Don’t overlook the cheese section at the rear, where cases overflow with more than 250 varieties. And that’s just in one of the three storefronts over which Sahadi Importing Company has spread.

In all, Sahadi’s carries 4,000 to 5,000 different products from across the globe. Presiding over this plethora of provisions is Charlie Sahadi, who for 51 years has run the store his father established in 1941. Charlie, who turns 72 next month, spends most of his days welcoming customers with a warm greeting and schmooze and, for long-timers, a hug. “I’m the people person here,” he told the Observer.

But Charlie’s reign is scheduled to end next week, when he retires from day-to-day running of the store, and his daughter Christine and son Ron take over.

Brooklynites weary of disappearing authenticity—across Atlantic, a Barneys outpost sells high-end handbags, condo towers rise nearby and that strip-mall standby, Michaels, will soon open a block away—need not fear that Sahadi’s changing of the guard means the end of a neighborhood standby.

When she takes the reins, Christine may give the place a fresh coat of paint, but other changes will be limited to the store’s back end, she said. “Very little change will be visible to the customers, because the customers are happy.”

They’ve been so for more than a century. The Sahadi legend begins with A. Sahadi, which was opened in 1895 by Charlie’s uncle Abrahim. Abrahim’s brother Wade—Charlie’s father—began working there in 1919, but two decades later a family spat ended with Wade being bought out with chickpeas and bulgur. He subsequently opened Sahadi’s Importing Company—three doors down from A. Sahadi—and eventually moved to Brooklyn in 1946. It took Wade two years to get a tenant out of the ground-floor storefront (some things in Brooklyn real estate don’t change) and in 1948, Sahadi’s opened where it remains today, expansions and improvements notwithstanding.

In a dingy office above the store, Charlie and his wife, Audrey, sit at facing, paper-strewn desks. Christine works on her computer an arm’s length away. Charlie, born and raised in an Antiochian Christian Orthodox family in Bay Ridge, has kept the family close. Ron lives next door to his parents in Bay Ridge, and Christine lives in a house back to back with Charlie and Audrey’s. (The youngest daughter, Renee, lives in Pennsylvania.)

Despite Christine’s pledge to carry on more or less as before, Charlie said he would understand if his children decide to cash out of the now-prime property.

“I came into the business because my dad expected me to,” Charlie said. “Fortunately it worked out for me. Putting in 70, 80, 90 hours a week isn’t for everybody.” Grandson Ron shows interest in the business, but only time will tell if he or one of his five cousins wants to be the fourth generation to run the retail store and wholesale business, the latter of which, Sahadi Fine Foods, became a separate company 15 years ago and distributes products out of a Sunset Park warehouse, where it also roasts the fresh nuts sold at the store.

“The Sahadi family has been doing this for 120 years. If it didn’t continue, yeah I’d be sad, but we don’t keep it going because it’s a family tradition,” Charlie said. “I don’t want the kids or grandkids to ever feel they’re disappointing the family” by choosing a different life. Charlie himself is already looking ahead, getting ready for a Texas vacation with his wife. “I wouldn’t change my life one iota,” he told the Observer. “It’s been a blessing.” 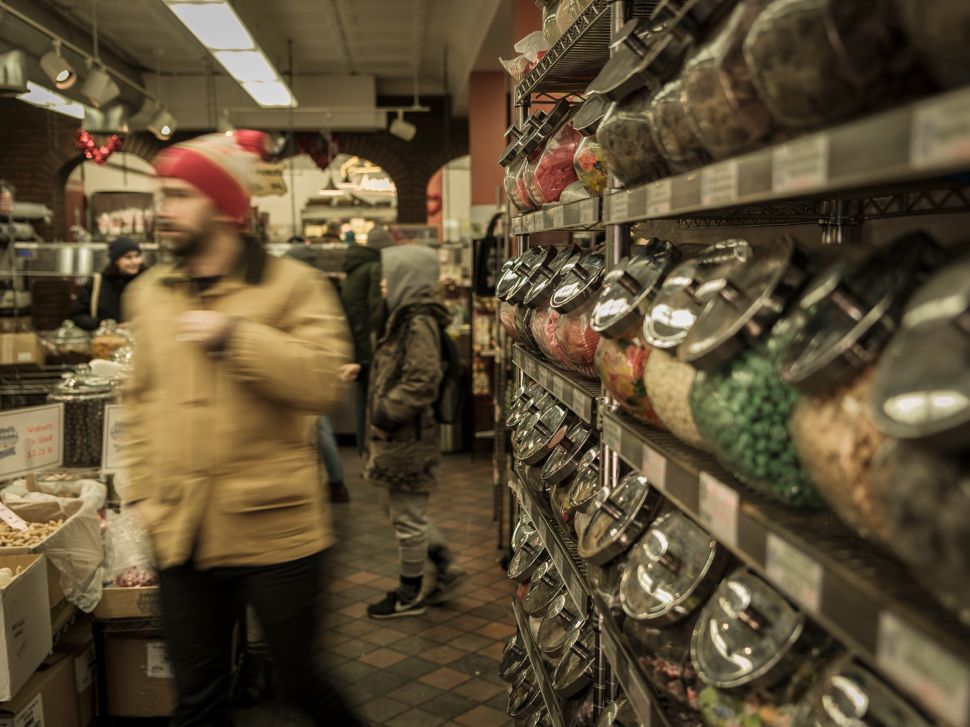