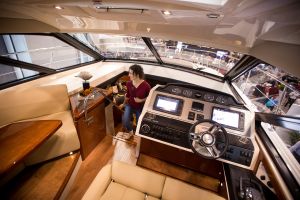 All aboard the 51-foot Sea Ray 510 Sundancer, the largest craft at the boat show. (Photo: Michael Nagle for Observer)

I never understood what Thurston Howell III was doing on the dinky little boat that got him shipwrecked on Gilligan’s Island. Rich guy like that—why didn’t he have his own super-yacht?

For me, that movie star dame was the key. A “coincidental” meeting on a boat charter, a couple of drinks, and suddenly Mrs. Howell is swimming with Natalie Wood, while Ginger comforts the bereaved millionaire through a difficult time. I floated that theory at the 111th annual Progressive Insurance New York Boat Show, which ran last week at the Javits Center.

“There’s a lot of boaters like that, that run the same way,” he said. “And they’re the greatest guys in world to meet, because they always have a cold drink and a smile.”

Mr. Froelich had come with his checkbook. “The prices are much better at the show,” he said. “And you gotta kinda kick the tires, you gotta see. And you can actually talk to the manufacturer before you buy.”

‘People aren’t looking for super-yachts here.But they could be looking at tenders for those yachts, which are here. Or, they might buy a 34-foot sport fishing boat which they carry on their super-yacht.’

The Boat Show, founded in 1905, is the first and longest-running event of its kind. But regional competition has grown, and today the five-day event is the country’s third-largest watercraft expo—behind Miami and Atlantic City—and focuses on mid-sized craft for local waterways.

“People aren’t looking for super-yachts here,” said Thom Dammrich, president of the National Marine Manufacturers Association, which presents the show. “But they could be looking at tenders for those yachts, which are here. Or, they might buy a 34-foot sport fishing boat which they carry on their super-yacht.” 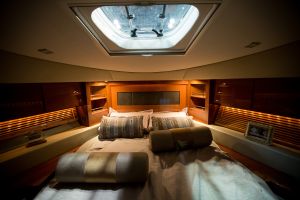 Tricked-out port fishing boats are a big trend this year, as are wake-surfing boats—small craft that produce outsized waves for boarding on. One new model—the Wakesetter 25 LSV—comes with an electronic wristband that the boarder uses to control wake intensity, and a rear-pointing video camera for immediate posting on social media (of course).

If that sounds like too much work, consider Hinckley’s stately Picnic Boat MKIII, a gorgeous, teak-decked throwback to a more relaxed era.

A favorite of Rockefeller generations past and present, the picnic boat does exactly what it says on the box: putters you out and back for lunch—albeit with a casual elegance—but that’s about it.

For sheer glitz, however, consider the 51-foot Sea Ray 510 Sundancer. The so-called “Queen of the Show”—the largest and most expensive craft on the floor—is a tech-laden glory with two staterooms, two salons, two bathrooms (sorry, “heads”), a hydraulic swim platform and something called a “Zeus Drive.” Yours for $1.649 million retail, or $1.249 million at the show.

“It’s popular with doctors, lawyers and finance people. They don’t have enough time, but they have the boat,” said MarineMax boat broker and sales executive Bruce Parker. “Also, car dealership owners. They’ve gotta get away from cars, and they love boats.”

An island of calm on the frenetic floor was Rudy Gallo, an elderly sales manager for Dave Bofill Marine in Southampton. Although small in stature, he looked down on proceedings from the aft of a Ranger Tug R-21 EC, a $61,000 novelty, designed to look like a tugboat.

Mr. Gallo’s many decades in the business have leant him a wise mien. And he had the most thoughtful take on why a lockjaw plutocrat such as Mr. Howell might risk his safety on a dangerously under-prepared rust-bucket like the SS Minnow.

“You know, a lot of people don’t have the capability of running a boat,” he said, with the weary air of a man accustomed to dealing with dilettantes. “So, they go out on a rental boat like that.” 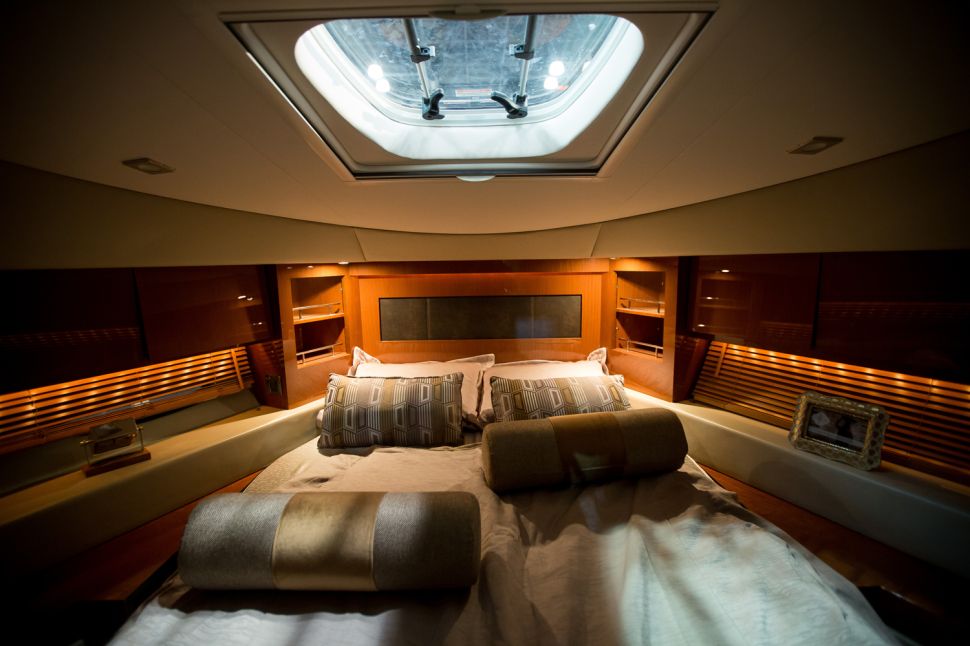