Last week came reports that North Korea had successfully conducted a test of a hydrogen bomb. The rogue nation was (again) the top trending topic on Twitter. Clearly, nuclear armageddon was right around the corner. It was 1964 and the notorious “Daisy ad” all over.

As I sat down to write this article, I reread my previous piece for the Observer about the last time we all did this peculiar dance. Remember when North Korea supposedly hacked us and they were going to blow up theaters that showed The Interview and the White House was going to pay and Obama would be assassinated? Of course you don’t—because none of these things came to pass, despite the media apoplexy of December 2014.

It is constantly repeated that North Korea is the least understood nation on earth. This might be true. What is untrue is that this least-understood nation is inherently incomprehensible, as if its actions weren’t the function of human beings with brains that function just like everyone else’s. “They’re crazy” is invariably a confession that “I don’t get it.”

Here we see the crux of the North Korean dilemma: they don’t have anything that anyone wants.

In this case, there’s not much to get. In order to acquire goods or services, one must first produce something of value. Barring that, the only recourses are to force, theft or fraud. Here we see the crux of the North Korean dilemma: they don’t have anything that anyone wants. In fact, they haven’t had anything anyone wants for decades.

During the Cold War, the communist nations engaged in a bit of barter amongst themselves as a means of maintaining loyalty. North Korea would send China or the USSR something of dubious worth—very low quality socks, for example—and in exchange would receive valuable items such as gasoline at a “friendship” rate. It was bribery and diplomacy in the guise of equitable exchange.

With the collapse of the Soviet Union, all this went out the window. Even nation-states can’t ignore economic principles, in this case the concept of a credit rating. Given North Korea’s dubious distinction of being the first communist nation to default on a loan, the friendship policy went out the window. Both trading partners demanded payment in hard currency—something the DPRK had little of.

Enter the Songun idea. Many in the West are familiar with the Juche idea, Great Leader Kim Il Sung’s incoherent “self-reliance” ideology that basically decreed that whatever he liked was inherently Korean and therefore inherently good. What few appreciate is that this was further developed by the Dear Leader Kim Jong Il into Songun, “military first.” Under the Songun idea, it is the military that is the basis of society. (Here’s a nifty primer, direct from Pyongyang).

If the North Koreans are insane and/or suicidal, then why are their results so rational?

All the talk about North Korea being a static society are simply false. Under Songun, everything—including the Workers’ Party of Korea—is subordinated to the military. The communist laborer now toils for the fascist soldier (although in theory everyone is still equal etc, etc).

Songun provides an ideological justification for North Korean militarism. Under Songun, it is not only fair but a downright necessity to choose guns over butter lest the Korean people lose both. After all, at any moment the “wicked Jap devils” or “Yank bastards” are waiting to invade and (re)colonize the peninsula. Even now, South Korea is basically an American colony, where Koreans are given AIDS in order to act as human guinea pigs for their U.S. imperialist puppet masters.

Kim Jong Il boasted that he found a way to compete with the “Russian bear” and the “Chinese dragon.” He was prepared to face the “mad dog” that South Korea has become, backed by the “American lion” and “Japanese monkey.” How? Simple. He did this by turning North Korea into a “hedgehog.”

A hedgehog’s spines point in every direction, keeping it safe from harm. Only in this case, the spines are missiles defending the Fatherland from a Korean War II. North Korea insists that its weaponry is purely defensive—and enjoys pointing out that only one nation has ever targeted civilians with nuclear weapons, and that same nation’s leaders constantly appear on TV to note that “all options are on the table.” (Hint: they don’t mean Belgium.)

The question is whether those missiles are in fact an offensive threat. If the North Koreans are insane and/or suicidal, then why are their results so rational? Why are they the last ones standing? Is it the world’s worst, longest suicide? Or maybe they don’t have the death wish we would like them to have.

There are two types of bank robbers. The first runs in and shoots up the customers. The second shoots in the air, getting the loot but leaving everyone unharmed. Both are evil, both are criminals, both are dangerous. But they are not equally evil, and they are certainly not equally insane. One of the last times North Korea tried a missile launch, it landed in the sea of Japan, not Seoul. This was not a mistake. It was a demonstration. If you can’t produce wealth, you’d better scare people into giving you money. By showing the world their guns, North Korea can more easily demand some of the world’s butter.

Michael Malice is the author of Dear Reader: The Unauthorized Autobiography of Kim Jong Il. He is also the subject of Harvey Pekar’s graphic novel Ego & Hubris and the co-author of five other books. 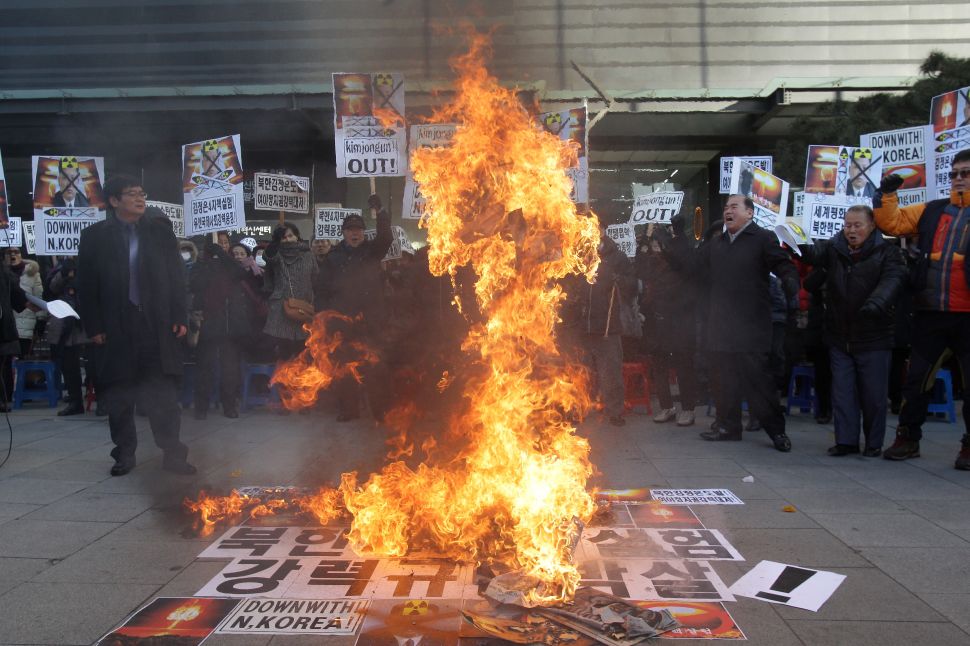