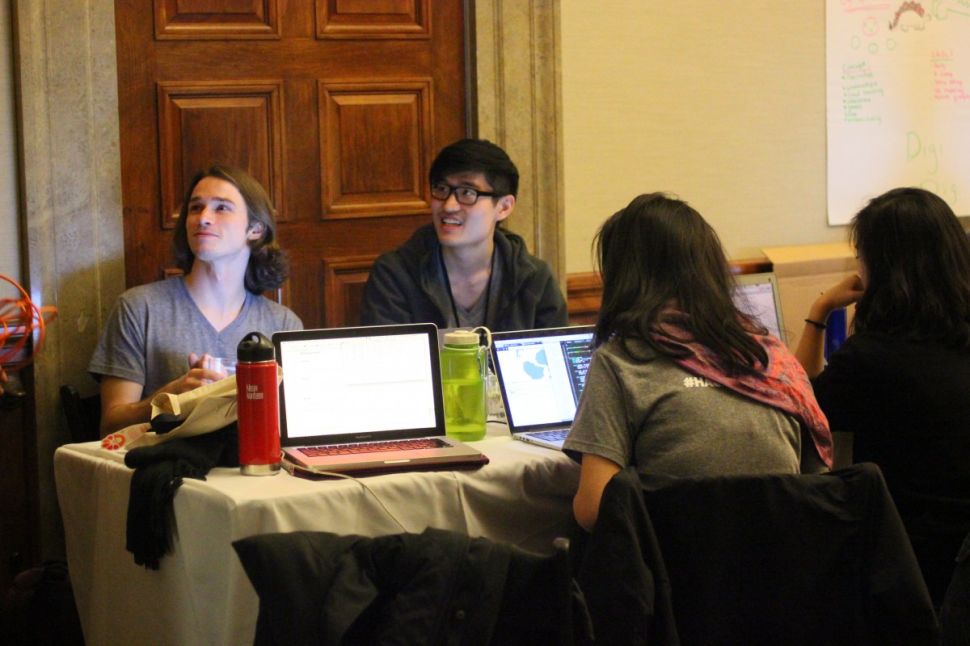 Paleontologists keep meticulous track of exactly where they find any given dinosaur fossil. There’s just one problem: where a fossil is found isn’t where a dead dinosaur was. From the time any given dinosaur died to the time a human scientist could find it anywhere from 200 to 65 million years might have passed. The world changes a lot in that much time, because continents are ever so slowly moving.

Pangea3 model set back to 171 million years ago. (Screenshot: Github)

At a 24-hour hackathon starting on November 21 at the American Museum of Natural History, called “Hack the Dinos,” a team from the Recurse Center decided to hack together a new visualization that would show where a dinosaur would have actually laid down on the globe, when it died. It makes a big difference, after all. If a continent has made a big move north or turned, a scientist could assume a species lived in a very different climate than it had.

In fact, as the team played around with the project, they found a fossil drifting into the ocean as they moved the model back in time. Checking the species, though, it turned out to be a sea-dwelling mollusk (perhaps a neighbor of liopleurodon), so that made sense.

Miriam Shiffman, a computational microbiologist on the team, told the Observer in an email that she was excited about the idea of spending a night in the museum, hacking on scientific data. “We came in with a pretty clear-cut plan, thinking that an interactive visualization would double as a tool for scientific discovery and great material for a brief presentation to a general audience.” This was Ms. Shiffman’s first hackathon.

Here’s their demo at the end:

Have a look at their visualization. See all their work on the project’s Github page.

The museum pointed the team to the Paleobiology Database, an open data set on the history of life. They took inspiration from a previous project, one that didn’t take the continental drift data back quite as far as this new data, which the team also made use of.

Crunching 200 million years worth of data in 24 hours can make for an intense environment. “Our team was having merge problems around the time that we went to sleep (~5am)—a common problem in collaborative projects, when multiple team members are working on different but overlapping parts of the same code. We went to sleep a little frustrated (melodramatic computer slam and all),” Ms. Shiffman wrote. “Then woke up much clearer-headed around 8, and Sher Minn easily settled the merge conflicts from her bed (next to a giant Stegosaurus).”

The Recurse Center is a three-month fellowship program where experienced and new coders go to deepen their skills. Pangea3 (a portmanteau of “Pangea,” the name of the early super-continent, and D3.js, a Javascript library that helps with visualizations) was one of two teams that formed from the center.

“One feature that I would really like to add (and was working on up until the minute we had to submit) is the ability to follow a fossil of interest over geologic time—i.e. by changing the color of a dot when clicked,” Ms. Shiffman wrote, but the center fellows have to focus now on finding gigs, so the future of that work is uncertain.

All they’ve done is up on the Github page, if anyone else wants to keep the work going.

The hackathon is part of the museum’s BridgeUp: STEM program, now in its second year, aimed to encourage young women and minorities to get involved with science while emphasizing the importance of using data in modern research.