After the campaign manager for Sen. Bernie Sanders said earlier today that there was “no daylight” between the senator’s record on gun control and President Barack Obama’s, top aides to Hillary Clinton struck back in full force, accusing Mr. Sanders of misrepresenting his voting history.

“When Senator Sanders’ campaign attempts to say there’s no daylight between his record and that of the president’s, his record and Hillary Clinton’s, that’s just not true,” said John Podesta, Ms. Clinton’s campaign chair, in a conference call with reporters.

In a New York Times op-ed today, President Barack Obama wrote that he would “not campaign for, vote for or support any candidate, even in my own party, who does not support common-sense gun reform.” This led to speculation that Mr. Obama, a Democrat, would not support Mr. Sanders, an independent who caucuses with the Democrats, were he the Democratic nominee for president.

Ms. Clinton, a former New York senator who favors tough gun control measures, has clashed with Mr. Sanders, who hails from rural Vermont where gun ownership is high, on the issue of gun control before. While Mr. Sanders, a self-described democratic socialist, is running to Ms. Clinton’s left on most domestic and foreign issues, gun control is the rare place where Ms. Clinton owns the more liberal record, and her campaign has not been shy about reminding Democrats of this fact.

As a member of the House in the 1990s, Mr. Sanders voted against the Brady bill, a signature piece of gun control legislation, and drew the ire of liberals when he voted for a 2005 bill that gave gun manufacturers immunity from lawsuits if their weapons were used illegally. Ms. Clinton and Mr. Obama, then serving in the Senate, voted against the bill.

“This was hugely consequential,” Mr. Podesta said. “Senator Sanders has spent the duration of this campaign actually defending … the vote.”

In an interview on CBS’ Face the Nation last month, Mr. Sanders said he was willing to rethink the legislation, though he did not disavow the vote. “In the sense that if a small gun shop owner in the state of Vermont sells a product, a gun, legally to somebody else who then goes out does something crazy, do I think that that small gun shop owner should be held liable for legally selling the product, no, I don’t,” he said.

“But I think, bottom line is, that we should be rethinking that legislation and we should be doing everything that we can as a country to make sure that weapons do not get into the hands of people who should not have them,” he added. 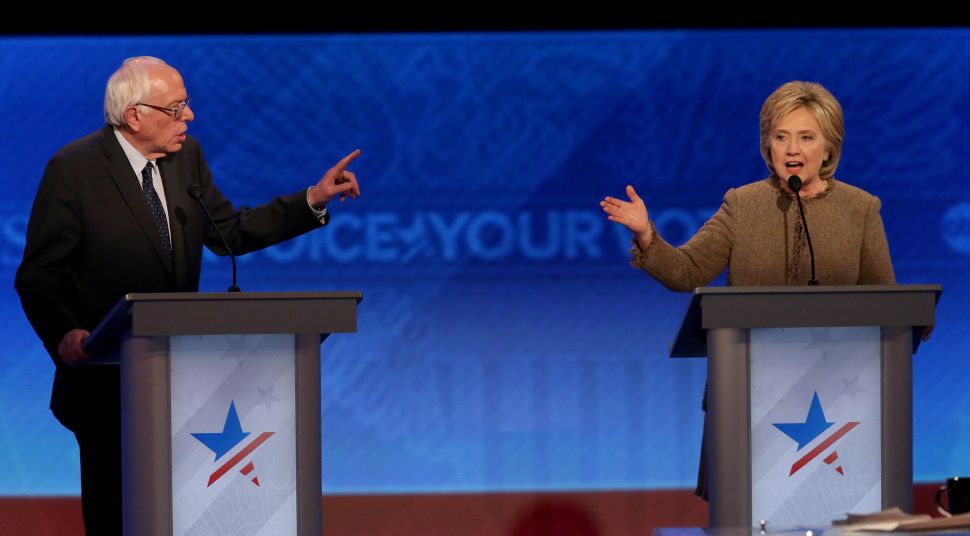