Max Blumenthal, who was revealed by the Hillary Clinton forced email dump as one of her secret sources and advisers on Israel and Middle East affairs, is one of the great Israel haters in America today.

A writer should avoid hyperbole. But when it comes to Max Blumenthal, son of longtime Clinton aide Sidney Blumenthal, it’s hard to avoid superlatives. Max is quite simply one of the most biased, anti-Semitic, terrorist-defending, Israel-has-no-right-to-exist haters out there.

Max, who spends most of his professional life being ignored because of his extreme, hate-filled drivel, recently became the focus of scrutiny when it was revealed that his father, Sid Blumenthal, promoted Max’s anti-Semitic writings to Ms. Clinton when she was Secretary of State of the United States. More explosive are Ms. Clinton’s emails praising Max’s work.

Throughout this entire email scandal, both Max and his father have been silent. One might assume the Hillary campaign sees they have a Jeremiah Wright problem and have done everything to muzzle Max.

Now I’ve discovered that Max might have a problem with America too, seeing as he is prepared to repudiate the First Amendment.

It appears Max can malign the Jewish State and falsely accuse it of the most vile atrocities but the moment someone exposes him, he demands press censorship.

After reading my column that exposed the influence of his writings on Ms. Clinton, Max wrote to The Huffington Post demanding my column be removed. A veiled threat of legal proceedings for libel was included.

It appears Max can malign the Jewish State and falsely accuse it of the most vile atrocities but the moment someone exposes him, he demands press censorship. I have seen the same reaction by so many Israel haters. So let’s address Max’s objections and lay out the truth for all to see.

In my column, I call him out for repeatedly comparing the Jewish State to the Nazis in his vapid book Goliath, Life and Loathing in Greater Israel. Max protested that his book did no such thing. I was initially surprised he was upset about this at all. Given the fact that he has made a career of trying to harm the Jewish state, while giving Hamas and other terrorist groups a free pass, I would have expected Max to take pride in what I wrote about him.

Be that as it may, the chapters in Goliath have titles such as “The Concentration Camp,” “This Belongs to the White Man,” “How to Kill Goyim and Influence People” and “The Night of Broken Glass.” The book uses the well-known technique of hiding behind the quotes of others to say things he is too cowardly to say himself. Rabbi Abraham Cooper, associate dean of the Wiesenthal Center, called Max someone “who conflates the Shoah [Holocaust] and Holocaust imagery with phantom Israeli crimes.”  In the Wiesenthal’s Center’s 2013 list of worst anti-Semitic and anti-Israel quotes, Max received ninth place, in part for having quoted “approvingly characterizations of Israeli soldiers as “Judeo-Nazis.”

There is no denying that Max compares the modern day democratic state of Israel with Nazi Germany. Look at some of these quotes he uses in his book.

“A Nazi-like mentality also exists in our country…” “That says a great deal about the Nazi mentality that is dominant here…” “In modern day Israel, the African refugee occupied a similar role as the devious Jew in Weimar-era Nazi propaganda…” “There are Judeo-Nazis…”

Max, you need to own the fact that you have made that most horrendous and unforgivable comparison between the Jews in Israel and the Nazis. Trying to censor me, or threatening libel suits, will not stop people from seeing the truth.

‘Blumenthal doesn’t know the history and ignores the inconvenient bits of the present, which is one reason his book has flopped. Worse, he thinks he knows all he needs to know.’

In his lawyerly letter to The Huffington Post, Max also denied that he had ever called for the majority of the Jews living in Israel to be expelled to make way for a Palestinian state. Perhaps he forgot what he said in an October 17, 2013 interview at the University of Pennsylvania with Ian Lustick.

Mr. Lustick asked him, “The last chapter [of Goliath]… is the exodus, which you could infer, if you were me, a call for ‘the end of Jewish collective life’ in the land of Israel. Is that your conclusion?”

Max responded, “Zionism as a philosophy…is a failed project…” He continued, “These are Israelis who are attracted to Europe, who do not feel that they are a part of the Arab world…There should be a choice placed to the settler-colonial population” (a term Max uses to describe all Israelis): “You become indigenized” and “have to be willing to be a part of the Arab world.” Or else you have to leave. He adds, “This choice needs to be placed to the Israeli Jewish population and it can only be placed to them through external pressure, the kind of pressure that the BDS movement is exerting.”

If someone were to tell the people of New York City that they have to live under Sharia law or leave in a mass exodus, this would in essence be a call for the mass expulsion of the vast majority of its population because almost all New Yorkers would refuse accept that kind of life. It’s the same idea here. That’s not even mentioning the fact that such a scenario would entail the mass murder of all Jews in Israel by the genocidal terrorist group Hamas (whose charter calling for the extermination of all Jews includes Max).

In my column, I also wrote about how arguably the most prominent anti-Semite in America, David Duke, praised Goliath. Max complained that this wasn’t true. I will set the record straight. Mr. Duke himself didn’t write about the book, but his racist, anti-Semitic website had two different postings that praised it. And, while we are clarifying things, I would just like to add that Max’s writings have been featured on the Neo-Nazi website Stormfront and the anti-Semitic Electronic Intifada site, as well. So I hope that clarification helps.

It is truly unfortunate that we have people like Max Blumenthal, self-hating Jews of the worse kind, who are willing to distort facts and deceive others in their attempts to delegitimize and destroy the Jewish State of Israel.

Max also complained when I pointed out that his book was “widely panned,” dismissed by reviewers as a bunch of tripe and garbage. I should have been more clear. One reason he may claim that his book was not widely panned is because many publications didn’t even deem the book worthy of review. So yes, the book wasn’t widely panned; it was contemptuously ignored.  For example, Sohrab Ahmari, the assistant books editor at The Wall Street Journal tweeted that he had two copies in his trash can (@SohrabAhmari, October 19, 2013) and that “We donate hundreds of review copies a week (only review minuscule % of books); but “Goliath” doesn’t even rise to donation-worthy.”  They literally threw the book in the garbage. That’s worse than panned.

@BekahWolf We donate hundreds of review copies a week (only review minuscule % of books); but "Goliath" doesn't even rise to donation-worthy

Finally, Max complains that I wrote that Goliath is full of lies. Unfortunately, the truth is something that Max has seemed to struggle with in the past.  He once titled one of his blog posts “Top Republicans to welcome Netanyahu, who called 9-11 attacks ‘very good,’ said anti-US terror helps Israel.” The notion that Bibi Netanyahu praised the attacks on the United States is as obscene as it is false.

But Max was also caught red-handed fabricating a quote from Karen Greenberg, director of the Fordham School of Law’s Center on National Security. Max quotes her in his article: ” ‘After 9/11 we reached out to the Israelis on many fronts and one of those fronts was torture,’ Greenberg told me. ‘The training in Iraq and Afghanistan on torture was Israeli training.’ ”

Jeffrey Goldberg, writing for The Atlantic, asked Ms. Greenberg about this quote and she responded by stating, “I never made such a statement. I’ve never seen any proof of this. I told him I had heard a story out there about this issue, but that he should look into it and see if he could find evidence, because I have no proof of this charge… He was looking for corroboration but I told him I didn’t have any.”

Max doubled down on his lies, writing in the pro-Hezbollah newspaper Al-Akhbar, “I am not sure why Greenberg would deny the statement she made to me on the record unless she was intimidated by Goldberg and the pro-Israel forces he represents.” However, Ms. Greenberg had given this same clarification to Adam Serwer of Mother Jones, and when Mr. Goldberg asked her by email if she had felt intimidated by his question, she responded with, “Of course not.”

In regard to Goliath, comparing Israel to the Nazis is undeniably the biggest lie of all. A good description of some of the book’s many other falsehoods comes from J.J. Goldberg of the Forward. He writes, “Blumenthal doesn’t know the history and ignores the inconvenient bits of the present, which is one reason his book has flopped. Worse, he thinks he knows all he needs to know, and just what readers need to know. He describes Israel’s assault on Gaza without telling of the thousands of rockets bombarding Negev towns for years beforehand. He touchingly recounts the 2004 assassination of Hamas founder Abdel Aziz al-Rantissi but doesn’t mention the hundreds of Israelis killed by Rantissi’s suicide bombers. The Palestinians are guilty of nothing. Israel’s actions are entirely unprovoked, motivated by pure racism.”

It is truly unfortunate that we have people like Max Blumenthal, self-hating Jews of the worse kind, who are willing to distort facts and deceive others in their attempts to delegitimize and destroy the Jewish State of Israel.

That Hillary Clinton is taking advice about Israel from his deranged rantings about the Jewish State is deeply troubling.

Rabbi Shmuley Boteach, “America’s Rabbi,” is the international best-selling author of 30 books, winner of The London Times Preacher of the Year Competition, and recipient of the American Jewish Press Association’s Highest Award for Excellence in Commentary. He will shortly publish The Israel Warrior’s Handbook. 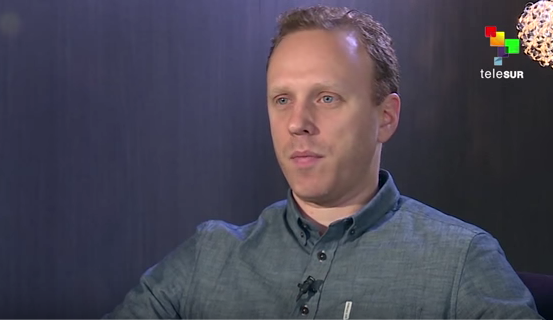