Early in my career, when I was really entrenched working at Wine Library, my dad pulled me aside and said something that I thought was curious. He said, “You’re always changing your mind.” He spoke about it as a negative personality trait. It was almost as if he was saying I was lying. “But you said…” kind of thing.

It was a very interesting moment in my career, because my immediate response was to say something like, “Yes, but that was nineteen months ago. That wine market was better.” Or “That was last week, Ricky was still working here.” Whatever my response was, it was the first time I really thought about why I changed my mind and what prompted it.

That is something that will always stick with me. The importance of being open to change is always top of mind for me in how I run and manage my businesses.

Just a few days ago, I tweeted this: 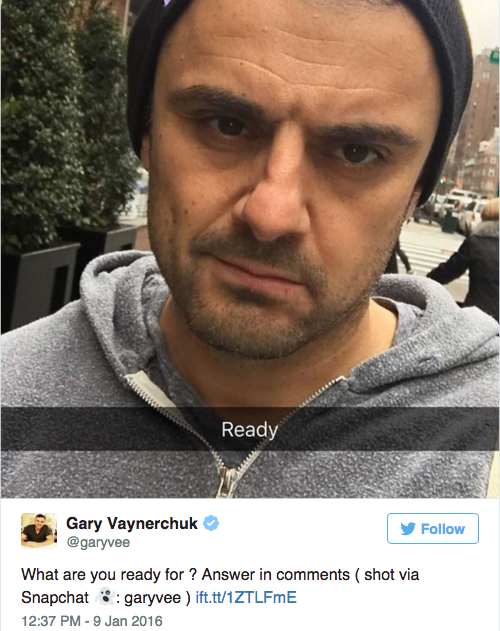 And I got this reply: 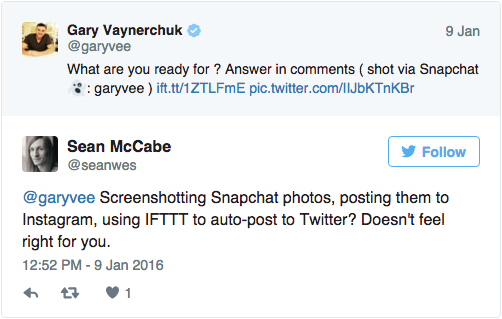 Let me be clear about one thing: the narrative I have created surrounding myself that says I “don’t like social automation” needs to be better understood. It’s not that I nix automation in every single instance. Rather, I don’t like it when people are trying to trick you into thinking it’s a human behind the action. I hate the “Hey Gary” email that pretends to be personal because my name is at the beginning, but actually isn’t at all. It’s the intent that matters to me.

So let’s get to the example above. The IFTTT app allowed me to create content that felt more native to Twitter. If you look back to previous tweets, I constantly crop photos to make sure they are native to each platform. In this case, IFTTT did it for me. Additionally, I used the IFTTT URL. That creates no confusion of what I am doing. The content/photo is being aggregated from Instagram. Using the app also increased efficiency by saving time for me; I didn’t have to go crop the image myself and upload, like I would before.

Back in the day, when I would talk about not using Twitter to drive to Instagram, it was a different time with different platform functions. The image would just appear as a URL. Twitter didn’t automatically populate your tweet with the Instagram photo.

These social media platforms have evolved. I’m open to changing my mind on best practices, and that’s exactly what I did.

Platforms, social media, and the internet itself are all marketplaces. They shift and adapt, very quickly. I play with them. I constantly change my mind on the best ways to use those platforms. If I didn’t, I’d still be linking out to Youtube on Facebook, instead of uploading all my videos natively to make sure they get the most engagement. If you’re not always testing against best practices and moving in the direction of the platform’s changes, you’re going to be left behind.

My opinion of Twitter now is very different than it was twenty-four months ago. And in case you haven’t noticed, I’ve changed the energy and amount of time I’m using against different social platforms depending on the amount of attention I receive, which is what’s going on with  Snapchat right now. I let my opinion and usage of the platforms change as the platforms do. It’s no different from how I run my businesses. It’s what I was saying to my dad back in the day at Wine Library.

And because of that, I will continue to change my mind, predicated on my current beliefs of consumer behavior and platform capabilities. Be open to change. Be open to letting yourself evolve. If you don’t, you’ll be left behind like all the great companies that once were. 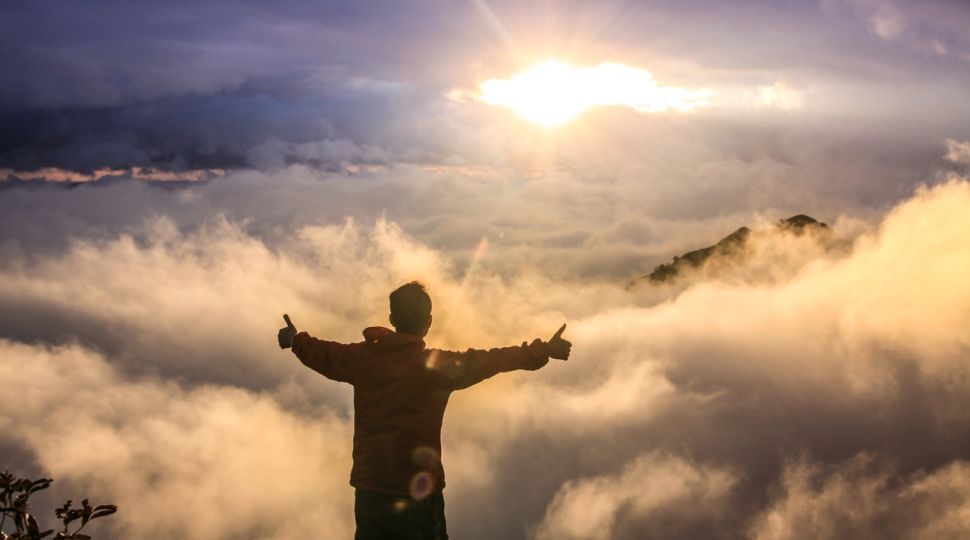